Recently, in a post Cameron Slater is social media “beef lasagne” I referred to the tactics of Pakuranga’s political attack blogger:

Cameron’s schtick is fizzing up nonsense for the purposes of Shock! Horror! spittle-flecked and dishonest attacks on people with whom he disagrees online. His purpose is to ‘hurt’ them. If by his ravings and incitement of his followers he can cause negative ‘real world’ effects for his targets (like, say, financial, or their employment), then all the better, according to this nasty bully-boy.

Yesterday I was directed to a brief interchange about another aspect of this online stalker’s modus operandi that bears examination: his frequent use of hate speech and persistent smear campaigns where he (and his gang) seek to denigrate or defame opponents with nasty one-sided personal abuse. See John Stringer’s The Whale Gets Another Harpoon.

Lately, presumably in thirsty pursuit of increased page-views, Cameron and his crew have noticeably increased the rate of posting on the website (pushing more volume through the partisan sphincter) and adopted a more ‘magazine-y’ style — complete with cute kitten videos (only dead ones) and ‘pop culture’ breaking news like (I’m not kidding) Harlem Shake videos.

They’ve also made virtually all of their posts, even short ones, require a ‘Read more »’ click … again, one presumes, this change is an effort to game the webstats which have become such an important part of Cameron’s self-identity. Of course, being Cameron Slater, those webstats have become a cudgel, and a platform for more of his crass and illogical your-opinion-don’t-matter-cos-I-haz-more-page-views! sessions like this: 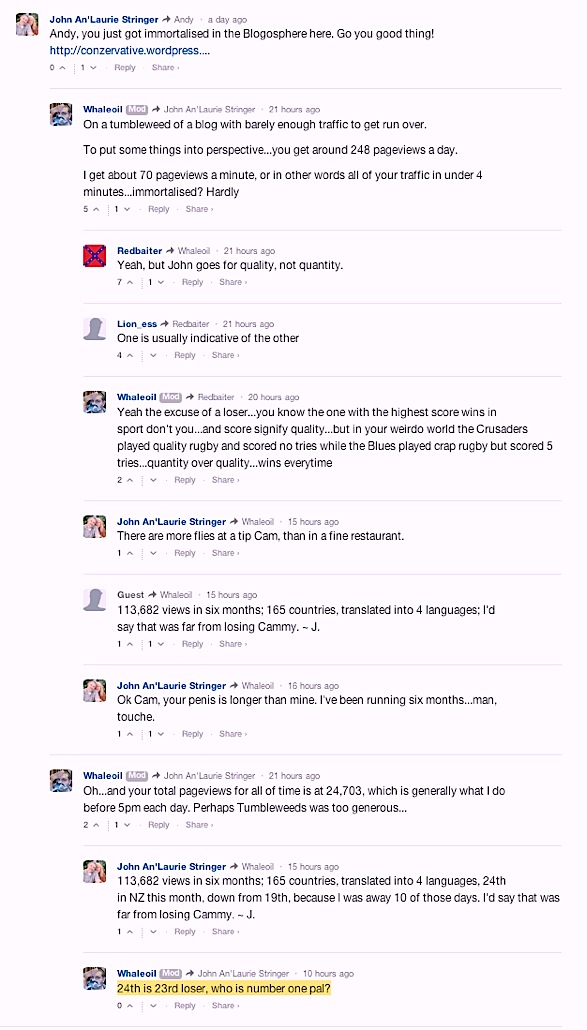 “Who is number one pal?” Cameron Slater responds to criticism. (Click to read the blog post ‘The Whale Gets Another Harpoon’ at John Stringer’s coNZervative.wordpress.com.)

In what little he does actually write, as opposed to copy-and-paste [glass house alert!] Slater often uses a deeply unoriginal, slippery and abusive style presumably as a way to avoid the effort of making solid arguments — and as a ‘defence’ against any examination or criticism. (“Naive and evasive”, to quote from a Court judgement (PDF) against him.)

Cameron clearly can’t stand being on the receiving end of even the mildest public criticism (see example above), even though he himself so readily dishes out abuse and name-calling (‘cock smoker’, ‘twat’ and an range of edgy sexual and homophobic insults). If I may say so, he does this far more than one might expect from someone who espouses his religious views and quotes a Daily Proverb from the bible.

Rather than criticism, Slater seems to prefer the supportive brow-mopping he receives from loyal acolytes like pseudonymous bloggers Cactus Kate, Barnsley Bill and Inventory2, others too afraid of him to tell him the truth about his actions, and any number of anonymous cheerleaders, enablers, sock-puppets and co-abusers. Any suggestion that Cameron might be mentally unstable is met with howls of outrage about ‘lack of empathy’ for his struggles with depression etc. — invoking political correctness that in any other context Cameron would spit on. (Is mental health the new ‘last refuge of a scoundrel‘?)

I don’t know whether he’s (currently) mentally stable or not — I assume he is. He seemed fine when we talked at a Howick Local Board meeting recently — but I’ve mentioned before that in my view Cameron suffers from a simplistic, truncated, venal view of politics as trench warfare — where one’s opponents are ‘enemies’ engaged in a dirty campaign using underhanded and illegal tactics — thus neatly justifying similar tactics (or worse) from him and his gang of defamers, propagandists and dishonest spin doctors.

Why even pay attention to him? You might well ask.

The best illustration I can give you is that if you were a passenger on a bus or a ferry and there was a noisy, drunken yobo shouting abuse, spraying bile, urinating, hassling and making life unpleasant for his fellow passengers, well — what do you do? Now consider the effect that Cameron and his mostly anonymous fellow louts and their gutter tactics (I mean it) have on our political discourse — our ‘journey’ as a country. We’re dealing with issues far too important to be left to bigots, bully-boys and liars.

I don’t see myself as a deputy sheriff or anything like it, but at times I think the fact that one notices things going awry is almost a commission to try to right them. Or at least respond.

Hate speech is a form of violence

I’ve come to see Cameron Slater’s website as a ‘histrionic hate blog’, as I have said before. Reflecting on it, I’d go a step further: It’s hate speech.

Mixed in with the guns, helicopters, fast cars, YouTube hits, and adolescent pop-culture pap (you know, typical blog stuff), Cameron routinely dispenses dubious statements about other people as if they were fact. As if fixated, he myopically whacks Labour Party politicians, ‘pinkos’, trade unionists, journalists, foreigners and Catholic priests (UPDATE: And Greens, of course! How could I forget this?) or anyone who challenges his worldview, and peddles outrageous provocations intermingled with nasty abusive attacks on people whom he — for some reason — regards as his enemies, or sometimes his friends’ enemies.

Here’s a definition of what Bill O’Reilly calls out as ‘hate speech’: 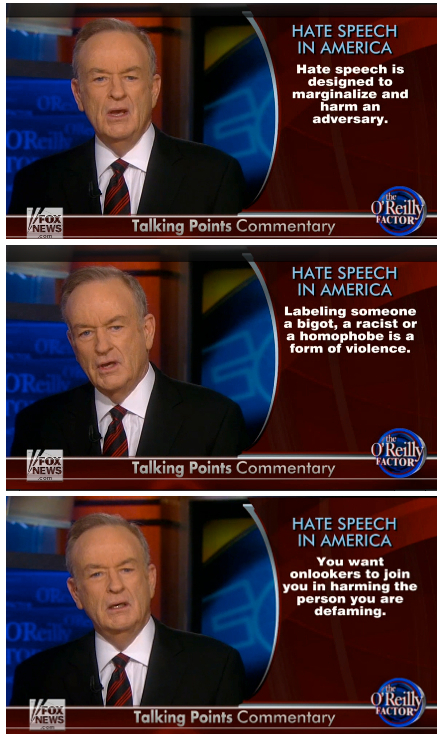 “Hate speech is very specific. It’s designed to marginalize and harm a political or idealogical opponent, a business rival or someone else the hater doesn’t like. If you can’t win the debate hate speech is a cheap way to retreat. Labelling someone a bigot, a racist or a homophone, whatever, is a form of violence. You want onlookers to join you in harming the person you are defaming. You are inciting bad feelings against another human being.”

Now, two things:
(1) It’s not rocket science.
(2) I’m not a fan of Bill O’Reilly and don’t like what he does with his influence, frequently. But he’s not dumb, he’s not insane and he’s not ‘evil’. All that said, when I heard it, the phrase “hate speech is a form of violence” resonated with me.

He’s right about that. And also the thought: “You want onlookers to join you in harming the person you’re defaming”.

Yeah. That’s how what Cameron Slater does with his hooligan sock-puppets looks to me. Let me  give you an example. 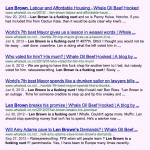 I know I’m partly stating the obvious here, but let me say this: Some who fancy themselves as political ‘operators’ (legend, meet lunchbox) falsely smear and demean their political ‘opponents’ in lieu of pointing out where their policies or intentions or actions may be wrong, and offering alternatives. They behave, not as political ‘opposition’, but, to borrow a phrase, merely as wreckers and haters.

In some cases they use heavy-handed on-going campaigns of nasty, dishonest public denigration, echoed by a chorus-line of anonymous/pseudonymous cowards and sock-puppets, for example, vacuously, repeatedly, abusing the Mayor of Auckland in disgusting terms.  (‘Len Brown is a f****** c**t’ – NSFW).

It looks like the ‘moderators’ (cough) of Cameron Slater’s histrionic hate blog deem such crap to be a contribution to ‘debate’ on their website. Anything for a page-view, eh Cameron?

Publishing that abuse, using those tactics is nothing but spiteful, poisonous hate speech — no matter who you’re talking about. I think it’s disgusting and should be called out for what it is.

Shrieking, bullying may see you prevail, for a while. But at what cost?

This distinction, from David Frum considering again his obituary of the gleeful/hateful class warrior Andrew Breitbart, (Breitbart: Second thoughts – Daily Beast) strikes me as at the heart of the political debate. It explains the temporary ‘ascension’ of bovver boys and lying hate-spewers — whether they’re anonymous, pseudonymous or out in the open.

In any political conflict between extremists and non-extremists, the non-extremists start with one serious disadvantage. They tend to be conflict-averse. Moderate-minded people tend naturally to be people of moderate temperament. When they encounter rage, hate, and paranoia, they flinch. Extremists, on the other hand, delight in conflict. Simply by being louder and nastier, they bully the non-extremists into silence, acquiescence, or exit. Which happens to be the recent history of the Republican party.
What America needs now, and what the Republican party most especially needs, are moderate-minded people who are also tough-minded – who won’t be shrieked down and who won’t be intimidated. “Civility” cannot mean: you yell, I yield. Conservatives deplore those old-line 1960s liberals who shriveled up when challenged by student radicals and Black Power militants. Well, now it’s happening in our house, and it is we who are being tested: Do we dare confront our own radicals? It’s not enough to have greater wisdom, greater tolerance, and greater patriotism if you don’t also muster courage, endurance, and will to win. Otherwise, you’re playing by Weimar rules.

As I said when discussing The Simon Lusk stigma (sorry to quote myself, again!):

Despite his ceaseless self-promotion as some sort of ‘conscience’ of the National Party and repeated attempts to position himself as a far-sighted prophet crying in the wilderness, lamenting daisies crushed in the caterpillar tracks of the Party machine, Cameron seemingly fails to grasp the impact of his near-continuous public displays of nasty, personal, churlish disloyalty and disrespect for his fellow Party members. These things hurt the National Party. That seems indisputable.
So Cameron Slater has become more than just a loose cannon. It seems he is seen as ‘an enemy within‘ the National Party. And Cameron’s guru/Svengali Simon Lusk with him, apparently.

To me, those behaviours, along with Cameron’s (and Simon Lusk’s?) attempts to bully National Party figures more toward class warfare and right wing political/social policies with cries of  ‘harden the f*** up’ have a direct parallel with the ‘extremists delighting in conflict’ phenomenon that David Frum identifies.

There’s no long term success in such ‘dark arts’ strategies, or there shouldn’t be. Liars are liars are liars. Breitbart’s brief, hyped, malevolent influence has largely passed with him.

In New Zealand politics, as elsewhere, success lies at the centre (hence most politicians claim to be ‘centre-right’ or ‘centre-left’ with an urgency akin to musical chairs). But in the — until now — wild west of the the blogosphere, it seems that perhaps the rule is: the more hateful, the more extreme, the more views. But is that influence? Nope.

Cameron, if that’s your metric for ‘success’, you’re welcome to it.

PS: My criticism of Cameron Slater’s miasma has, it seems, become one of the themes of this blog. Just go with it.