Had to happen: iPad approved for flight plans 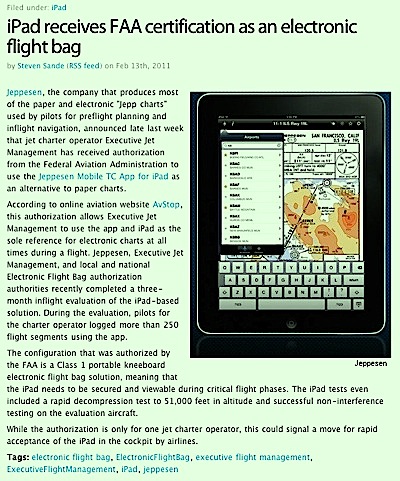 Jeppesen, the company that produces most of the paper and electronic “Jepp charts” used by pilots for preflight planning and inflight navigation, announced late last week that jet charter operator Executive Jet Management has received authorization from the Federal Aviation Admin-istration to use the Jeppesen Mobile TC App for iPad as an alternative to paper charts.

This says something about the reliability of the gear — and the battery? — doesn’t it?

It mentions a “rapid decompression test to 51,000 feet in altitude” … but gee, can you imagine Search & Rescue/recovery crews picking through the wreckage looking for an iPad? … nah, too horrible.

+
UPDATE: Great comment over on the TUAW stream (I can’t see a way to link to it directly)

Flyboy721 said:
I am an airline First Officer with a large regional airline and while Executive Jet is certainly not the first operator to have the iPad certified as an EFB, it will unfortunately not be nearly as quick and easy for the airlines to do the same. The FAA is notoriously waaaaaaay behind the curve when it comes to technology like such as this and is in fact even somewhat fearful of it as the FAA is filled with old geezers who barely know what a calculator is much less an iPad. Convincing airline management to buy thousands of the devices for their pilots is also another major hurdle. While not nearly as fearful of technology, their bottom line is always the almighty dollar. The only way airlines will adopt them in large numbers is first for the FAA to accept them and then they will have to be convinced that it will be cheaper for them to do this in the long run. On a brighter note, American Airlines has an active testing program for them and we can only hope it will be successful. As for my own airline, one of our fleet managers never passes up a chance to espouse to the powers that be the benefits of going to an EFB via the iPad. He has even done an analysis of the costs and the iPad definitely comes out ahead. But unfortunately, it has so far fallen on deaf ears.