« What Judith Collins told the Chisholm inquiry – part 1
The escape of exnzpat, Part 32 »

I actually, literally staggered when I was told yesterday that David Bowie had died.
‘Have you heard about David Bowie?’ someone asked me.
‘What? About his new album?’ I replied … then what a crash.

Bowie was a hero to me, an artist whose influence was enormous in my life. I have written about him for print and here on this blog (see: ‘David Bowie’s influence on acceptance of gay ‘lifestyle’‘ and read the comments). I’m not gay, but Bowie’s art, his unmistakable voice and his plainly evident intellect and adventurism stretched my teenage consciousness. He made it ‘OK’, acceptable. Bowie’s visibility confronted anti-gay bigotry and his example stirred and broadened the social membrane – even in little ol’ Wellington New Zealand. As I disclosed in that earlier post, I worried about him. About his health. 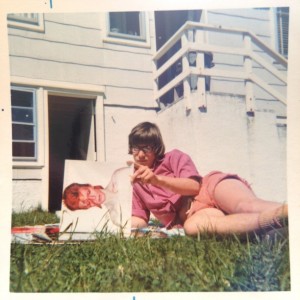 Me with Bowie’s album Aladdin Sane. (Like, when it was new.) Consciousness-expanding.

I know this will sound indulgent, and I apologise. Sorry, but I am partly the person I am because I identified with David Bowie’s personas, and in a way travelled with him as a fan on the musical journeys he took.

I’ve overcome my personal embarrassment to reproduce here a family snapshot of me aged about 14 or 15 in my mate Wayne’s backyard … listening to my precious David Bowie albums (loud) which was a statement in the early 70s, let me tell you. Of course, later, with Let’s Dance, he would become a mainstream superstar. But early on, nah, we saw ourselves and were seen as edgy and dubious outsiders, probably headed to Hell for liking him.

Farewell David Jones, who became Bowie, then Ziggy, then the Thin White Duke, then a legend. And thank you.

What an impact. What a life he lived.