Not a bad column from Michael Laws in the Sunday Star Times today. He’s worth reading when he writes about things he knows about… and there’s no question he knows about political ambition.

Not that the game isn’t intoxicating. We both know that it is. Parliament and politics is its own world. And the only people who truly understand that are those that are there.
Not the press gallery nor even the staffers. Not the party functionaries nor the luminary apparatchiks. Just the elected. [Comment: As a former member of the Parliamentary press gallery (actually while Laws was there), I have to strongly agree with him on this point. And the next.] I was only ever a government backbench MP. There is no lesser life form. You’re either a plodder with ambition or a plonker with ambition. Either way, you are going nowhere fast. People can smell the ambition like it’s a bad Lady Gaga scent. Maybe that’s why you are going nowhere. 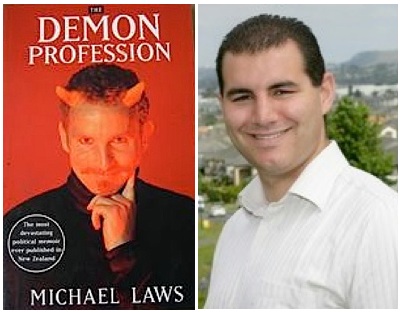 Laws’ book The Demon Profession is absolutely fascinating … and essential reading for every neophyte politician, including the newly-annointed Jami-Lee Ross virtual MP-in-waiting for Botany. (God save his soul.)

This passage from The Demon Profession (p 296) resonated when I first read it. Referring to machinations in 1996 around joining what he called the ‘psychic morass’ of Winston Peters’ NZ First Party, Laws recounted:

My corruption was now complete. I had become as opportunistic, as expedient, as politically vain as the system I loathed and publicly condemned. This profession had subtly but inexorably exposed my own ethical inadequacies — I equated the public good with my personal good; compromised my own beliefs for the promise of post-election power and influence; and had proven unwilling to test my own beliefs in the public arena, instead choosing to hide behind the skirts of more established personalities.
My fall was complete. It was just a case of waiting to hit the ground.