« The escape of exnzpat, Part 3
Plagiarism as a business model »

Leadership — not always about popularity

That’s what I’m talking about. Enough with the pious BS from the religious right and those looking for a smokescreen or trying to earn brownie points with their one-eyed supporters. 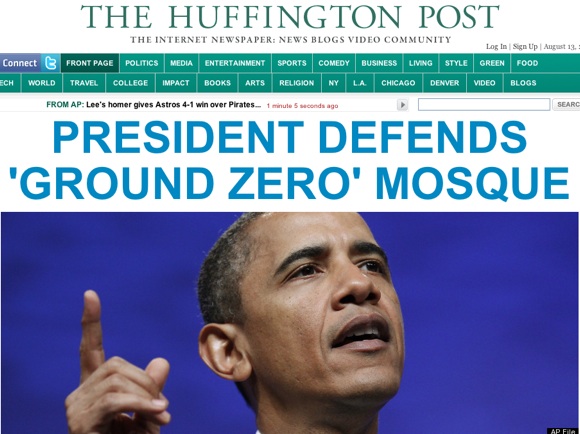 Another student of the US Constitution opposes ignorant, shallow religious bigotry. Amen.

“As a citizen, and as president, I believe that Muslims have the same right to practice their religion as everyone else in this country,” Obama said, weighing in for the first time on a controversy that has riven New York City and the nation.

“That includes the right to build a place of worship and a community center on private property in lower Manhattan, in accordance with local laws and ordinances,” he said. “This is America, and our commitment to religious freedom must be unshakable.”

Obama made the comments at an annual dinner in the White House State Dining Room celebrating the Islamic holy month of Ramadan.

The White House had not previously taken a stand on the mosque, which would be part of a $100 million Islamic center two blocks from where nearly 3,000 people perished when hijacked jetliners slammed into the World Trade Center towers on Sept. 11, 2001. Press secretary Robert Gibbs had insisted it was a local matter.

It was already much more than that, sparking debate around the country as top Republicans including Sarah Palin and Newt Gingrich announced their opposition. So did the Anti-Defamation League, a Jewish civil rights group.

Obama elevated it to a presidential issue Friday without equivocation.

Now, is there more to this issue than town-planning ordinances and the law’s constitutional blindness to flavours of religion? Yes, of course.

But those who ignorantly profess that the ‘Founding Fathers’ intended the US to be ‘one nation under a Christian god’ and that those of other religions (including Jews) should be treated as second-class citizens — and say that’s what they meant, are, to put it politely, talking out of their armpits. That’s not what the constitution says. Show me otherwise or admit you’re just appealing to religious prejudice.

While insisting that the place where the twin towers once stood was indeed “hallowed ground,” Obama said that the proper way to honor it was to apply American values.

“Our capacity to show not merely tolerance, but respect towards those who are different from us – and that way of life, that quintessentially American creed, stands in stark contrast to the nihilism of those who attacked us on that September morning, and who continue to plot against us today,” he said.

Obama harkened back to earlier times when the building of synagogues or Catholic churches also met with opposition. “But time and again, the American people have demonstrated that we can work through these issues, and stay true to our core values and emerge stronger for it,” he said. “So it must be and will be today.”

I was shocked by what I read about the strength of the anti-Catholic prejudice the Irish endured in Boston as reported in Nigel Hamilton’s JFK: Reckless Youth biography. Boy it was bad. Easy to forget.

Scratch a religious intolerant and you’ll find a bigot. Get a bunch of bigots together and you’ll have a lynching, or a church/synagogue/mosque/gypsy wagon burning … then a pogrom … and a holocaust. STOP.