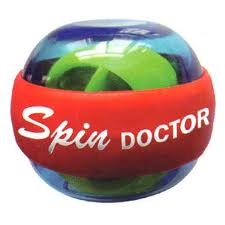 Are smear tactics compatible with claims of ‘integrity’?

I don’t think so. Especially if you piously declare you’re ‘above’ smear tactics and won’t use them … before you do.

In context of an earlier discussion about allegations of ‘secret funding’ (Tribalism), I found myself again considering the lobby group Vote For Change Campaign, dedicated to ridding NZ of MMP. This group of zealots last caught my attention when a former white supremacist and [allegedly] National Party electorate executive member by the name of Alex Fogerty was unmasked as one of their foundation members. That sparked wild ejaculations from left-wing whirling dervish Martyn oh-pleeeeease-why-won’t-somebody-give-me-a-mainstream-media-gig Bradbury… but Martyn had a point. That was a factoid worth knowing, and led to Mr Fogerty’s Vote For Change membership, um, ending …

‘The allegations of Mr Fogerty’s previous membership of a white supremacist group appear to be true and he will be asked to resign his membership immediately, or have his membership revoked if he chooses not to resign.’ — Jordan Williams/VFC media release (published 3 July 2011 and since removed from Facebook.)

Perhaps my sense of smell is oversensitive, but it appears to me that this anti-Proportional Representation group seeking the burial at sea of NZ’s MMP electoral system is using some shadowy The Hollow Men-style tactics. (See ‘misinformation experts‘).

For instance, their virtuous-sounding Pledges to New Zealand to ‘Play the ball not the man’ with ‘No negative campaigning’ and promising ‘Integrity in the Campaign’ appear, upon cursory examination, to be an hilariously transparent example of the sociopathic ‘If I say it’s true it must be true’ delusion. That, or the door-to-door huckster’s affirmation of faith: ‘You can fool some of the people all of the time.’

Demonising MPs after specifically ‘pledging’ NOT to? Looks like an ‘Integrity’ FAIL for the Vote For Change spin doctors.

For each of those noble ‘pledge’ sentiments has already been broken, to my way of thinking.

The series of ‘MPs behaving badly’ ads is produced under the Vote For Change banner — then pumped through the free-flowing online alimentary canal of right-wing proxy/attack dog Cameron Slater’s blog and tweetstream.

Cameron is against Proportional Representation, it seems, repeatedly castigating list MPs as ‘scum‘, for example, and declaring MMP ‘bad for National‘ pointing to what he sees as a paucity of future coalition partners for National. Enough said. Cameron also told me he’s not being paid by the anti-MMP brigade … except for an advertising spot on his blog. I take WhaleOil at his word.

Nevertheless, I’ve observed and commented before about Cameron’s active advocacy for the National Party and the anti-MMP cause — regularly squeezing the moist ordure of these slanted attack ads along with other insults and half-truths* through his partisan cyberspace sphincter.

Of course, the neat thing for the VFC campaign is that Cameron Slater isn’t openly one of them (although he seems more active than ‘frontchild’ Jordan Williams so far) … and since he says he’s not on their payroll, perhaps the magnaimous VFC ‘pledges’ (‘Play the ball not the man’ with ‘No negative campaigning’) don’t apply to his efforts on their behalf?
(Credit: Jordan Williams as ‘frontchild’™ & © Cactus Kate.)

But even so, the VFC campaign’s official approach, producing and distributing these denigrate-o-gram video ads seems to me to fly in the face of their ‘pledge’ (cough) to value integrity …

Integrity in the Campaign

Under MMP [Comment: see note below] politics and politicians’ reputations have been damaged by their bad behaviour. We do not want to add to the damage by demonising our opponents or getting into childish squabbles. Our campaign cares more about improving the public’s view of politicians and the political environment than it does about winning. We will not descend into muckraking, dirt throwing, scandal breaking or any of the other features of negative campaigning that makes voters resent politicians.

And yet it seems clear that they clearly DO descend into ‘negative campaigning’.

So, which is it, do you think? Deliberate, bare-faced bullshit? Clintonesque hair-splitting? … or near-schizophrenic levels of lack of self-awareness? You decide. 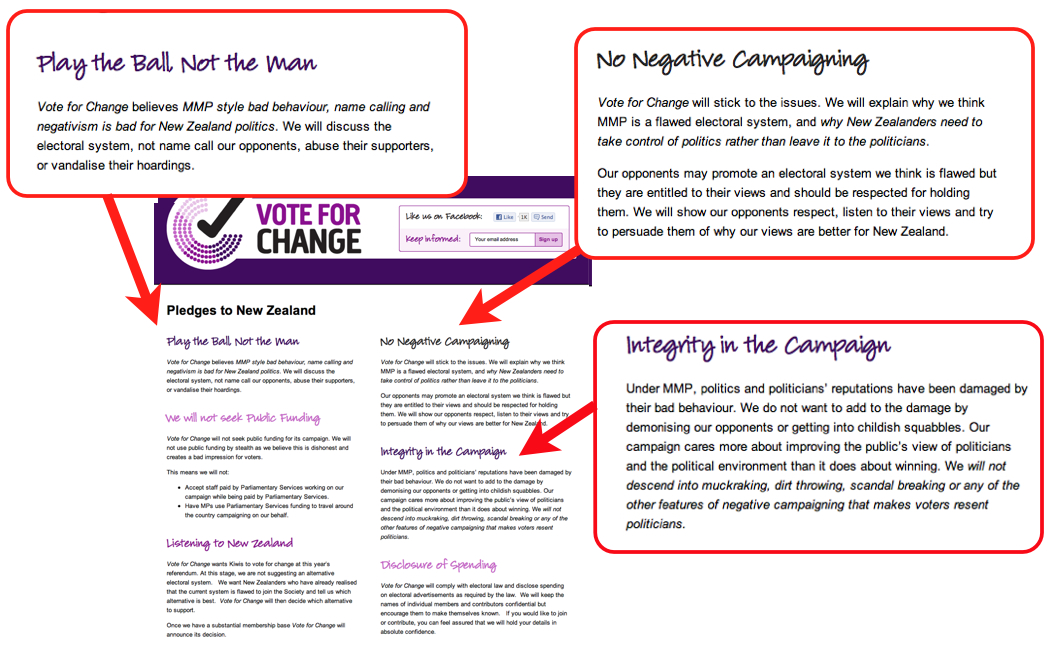 For public consumption only? Given their anti-MMP YouTube ads, are these so-called Pledges to New Zealand just cynical spin and positioning in the tradition of ‘The Hollow Men’?  (click to enlarge)

No doubt there’ll be more to say about this group and its artifice — as well as its connections, public and private — in the weeks to come. (Or not? It may be that discussion/buzz about them and their tactics is part of their marketing strategy.) Personally, I find it intriguing and entertaining to watch political marketers like this using advertising’s dark arts in an attempt to spin and frame the debate on these issues.

Note: These political activists not-so-subtly claim that it’s the ‘flawed system’ of Mixed Member Proportional Representation (MMP) which is the root cause of all sorts of political malaise. e.g. The tripe highlighted above: ‘Under MMP politics and politicians’ reputations have been damaged by their bad behaviour’ and ‘MMP-style bad behaviour, name-calling and negativism is [sic] bad for NZ politics’.

See what they’re doing? Repetitively linking ‘bad behaviour’ with MMP. Oh, riiiiight. As if before MMP politicians were sooo much ‘better behaved’ and ‘positive’. And First-Past-the-Post elected MPs were sooo much more competent and representative. Pfft!

Hogwash. MPs have been behaving like disgraceful children in Parliament for generations. The debating chamber and the adversarial nature of Westminster democracy (denigrate the opposition rather than win the competition for ideas) often leads to a barracking boarding school environment. That’s always been the case. It has nothing to do with how the MPs are selected, despite the anti-MMP brigade’s resentment politics spin. 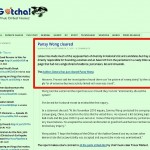 ‘Pansy Wong cleared”? No, not quite. Not cleared of abuse, just no ‘regular pattern of abuse’ detected. FAIL (click to enlarge)

* Yes, half-truths — e.g.’Pansy Wong Cleared’ was Cameron’s headline on a brief article which neatly neglected to mention the NEW confirmed case of travel perk abuse which the Auditor General’s report pinned on the disgraced Chinese National Party MP and her husband … in addition to the one the Speaker identified that saw her resign from Parliament. Instead, Cameron selectively quoted (OK, we all do that) and focussed on the shifted goalposts of ‘no regular pattern of abuse’ … before (to no-one’s surprise) squirting another burst of vitriol in Trevor Mallard’s direction.
How that looked to me: Fixated, credibility-eviscerating attack blogging from Cameron Slater on behalf of his political mates. Cam may not realize the damage he does to his own reputation — and the impact on opportunities for him to be embraced by ‘mainstream’ media — with episodes of such obvious jingoistic partisanship. He makes it easy for media decision makers and producers to dismiss him as hopelessly one-eyed, or irrational or flakey. I don’t write him off in that way. I detect he’s more complex, connected, and insightful at times … as I indicated in my post ‘In praise of Cameron Slater (yeah, I’m surprised too)‘ but I can see how others do. Bombastic barrow boy Matthew Hooton, for instance, is every bit as agenda-driven and partisan, but often dresses his right-wing spin and venom up more obliquely (well, unless he’s talking about Nicky Hager!)
I guess I’m not the target audience of either of them.