« What a twit!
Tea Party leading the world off the cliff – The Economist »

We’ve discussed before my preferred policy of tackling criticism head-on, and also, as a policy, publishing all threats I receive. 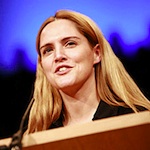 Yesterday British MP Louise Mensch, a protagonist in the ‘hackgate’ scandal admitted she exaggerated Piers Morgan’s ‘admissions/boasting’ of phone hacking in his Daily Mirror days, and publicly apologised. (Although in typical politician fashion, still tries to slip a few mealy-mouthed jabs in to salve the ego.)

In my questions to Rupert and James Murdoch and Rebekah Brooks, I wrongly stated that Piers Morgan, formerly editor of the Daily Mirror, had been open about personally hacking phones in a book he wrote. This was based on my misreading of an article in the Daily Telegraph published on the 13th July, which covered Mr. Morgan’s description in his book of how to hack a phone and how he won the Scoop of the Year on the story of Sven-Goran Eriksson and Ulrika Johnson. The Telegraph report covers the claim of a blogger that this story was acquired by phone hacking, and I misread that as Mr. Morgan himself claiming this to be true.
Therefore, I must apologise to Mr. Morgan and the Committee for this error about his book. I would have done much better to stick to quoting the figures for the Daily Mirror …

That teeth-grinding apology was necessary (she could have faced censure for misleading the committee) and was ‘accepted graciously’ by Morgan via Twitter. 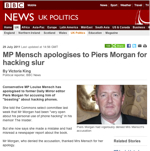 Points to both parties, although Mensch’s error is, let’s face it, regrettable and credibility-degrading. It was, frankly, piss-poor behaviour for an MP to fire off shots like that, from the safety of Parliamentary privilege,  without concrete evidence, then to resist his calls for retraction and correction for so long. Bad form.

However, my respect for her grew somewhat when I read her response to what looks like a ham-fisted attempt to intimidate her.

Mensch issued a press release containing what appears to be smear threats in correspondence from ‘David Jones Investigative Journalists’ in full and anwering with the flair I would expect from a novelist, nicely framing it in terms of plucky and persecuted truth-seeker.

Most importantly, I have not the slightest intention of being deterred from asking how far the culture of hacking and blagging extended in Fleet Street.

By her actions, she also deprived ‘David Jones Investigative Journalists’ (a pseudonym) of any scoop and spiked a dripfeed campaign against her.

On 19 July, as part of the CMS Select Committee, I questioned Rupert and James Murdoch and Rebekah Brooks on phone hacking at the News of the World.
I also focussed questions on whether hacking and blagging was, in fact, widespread throughout Fleet Street.

On 22 July I received the following email, which I reprint here in full and respond to below:

We are informing you that we have come into possession of the following information, about yourself, and would like to ask you for any comments, before we publish this information.

… Read her reply at politicshome.com.

Nice work. In the context of allegations/revelations about not-just-Murdoch media intimidating politicians into compliance, it’s interesting to see these tactics exposed in this way.

Phony ‘David Jones’ is maintaining his/her anonymity at this stage and issued a mealy-mouthed non-answer.

There’s more to come, I’m sure.

Hmpf. Not a bad reputation to have, though, eh?