So, who is Simon Lusk?

Scratch this one down to idle curiosity:

I’m seeing Simon Lusk‘s name bandied about in Parliament, in the media and on the interwebs. He’s a fairly low-key chap, apparently, who works as some sort of campaign manager/political careers advisor/ninja for various ‘players’ (or wannabe players) on the right of politics in New Zealand.

A blogger at The Standard James Henderson, in a post titled Beached as bro accuses Simon Lusk of being the brains behind right-wing attack poodle/volunteer PR organ Cameron Slater’s um, … behind his, er, … behind Cameron’s … um, gee, … his recent attention-grabbing (is that the right term?) even suggesting the two are co-writers of Cameron’s blog, but I’m not so sure about that. 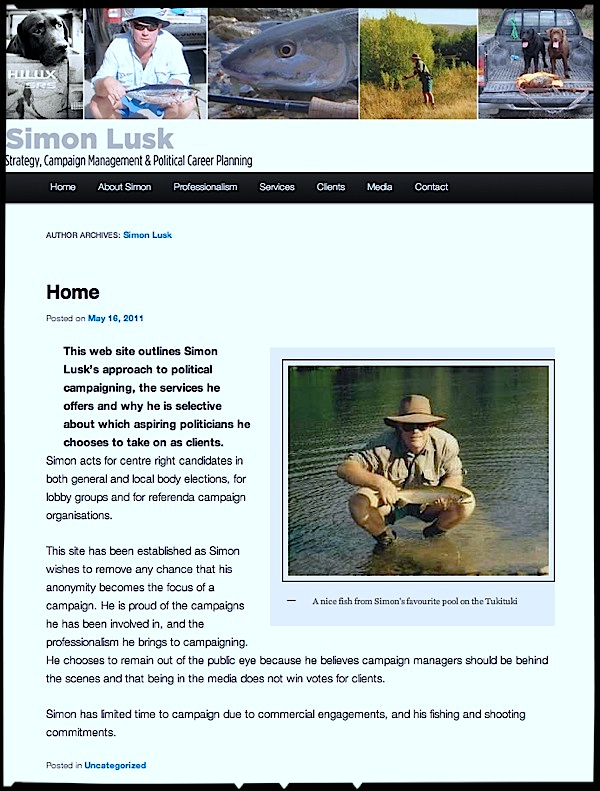 ‘This site has been established as Simon {Lusk} wishes to remove any chance that his anonymity becomes the focus of a campaign.’ Hmm, but the whole website is PASSWORD PROTECTED at present. Why?

I must say, I heartily approve of Simon Lusk’s marketing posture: “Hello, I’m simply selective Simon, I act for candidates on the political right, I’m proud of my work but very discreet about it. Oh, and I’m in demand and may just be too busy huntin’ & fishin’ to be bothered.” Noice. In other words: ‘You want me? You may not be able to have me!’ Playing hard to get is an old ploy, but still great marketing. 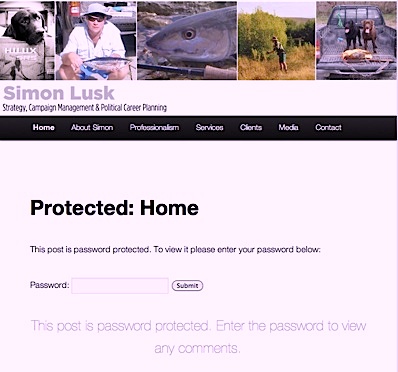 This web site outlines Simon Lusk’s approach to political campaigning, the services he offers and why he is selective about which aspiring politicians he chooses to take on as clients.
Simon acts for centre right candidates in both general and local body elections, for lobby groups and for referenda campaign organisations.
This site has been established as Simon wishes to remove any chance that his anonymity becomes the focus of a campaign. He is proud of the campaigns he has been involved in, and the professionalism he brings to campaigning. He chooses to remain out of the public eye because he believes campaign managers should be behind the scenes and that being in the media does not win votes for clients.
Simon has limited time to campaign due to commercial engagements, and his fishing and shooting commitments.

Now, the only trouble is, you need a PASSWORD to visit any pages on Simon Lusk’s information website (including the ‘Contact’ page). So, let me see if I follow the strategy: (1) Set up a website to ‘remove any chance that […] anonymity becomes the focus of a campaign’ … and (2) Make the whole site password protected? Hmm.

According to the NZ Herald, Nicky Hager’s book The Hollow Men points to Simon Lusk so:

In June 2005, National’s Napier electorate campaign manager Simon Lusk emailed Brash’s assistant Bryan Sinclair, writing: “Some of the ads we were discussing in Napier were shown to a selection of MPs yesterday.”

Hager says these documents confirm that “months before the election campaign, National Party MPs and staff – who would later earnestly deny any knowledge – were fully aware of the Exclusive Brethren advertising campaign plans and that at least some MPs had the seen the draft publications.”

More recently, Simon Lusk was named as being involved in last year’s Don Brash ACT Party leadership coup which saw Rodney Hide toppled under the pressure of ‘polls’ which purported to ‘project’ a ‘big swing’ for ACT under Brash (we know how that worked out). The NZ Herald’s Derek Cheng reported in a story Brash’s Act coup angers some National members …

The figure that has attracted the most attention from the Labour Party is Simon Lusk, a National Party volunteer who is thought to run a consultancy business to manage election campaigns.

In 2005 he was campaign manager for Napier MP Chris Tremain, and in 2008 he is believed to have had a hand in three National MPs’ campaigns, including Louise Upston in Taupo and Sam Lotu-Iiga in Maungakiekie.

Thanks from the bottom of my heart to the National Party volunteers in Taupo, led so well by Campaign Manager Simon Lusk and Electorate Chair Hilary Brown.

Referring to the mixed fortunes of last year’s anti-MMP ginger group which was early on outed as harbouring a neo-Nazi type, columnist Brian Rudman referred to Simon Lusk in these terms:

Yet in this case, Vote for Change didn’t do the simplest of checks on Alex Fogerty. Hadn’t its battle-hardened campaign manager, Simon Lusk, one of the masterminds behind Don Brash’s takeover of the Act Party, heard of Google?

… implying (in Rudman’s opinion, at least) some sloppiness or lack of sophistication on Simon Lusk’s part. Badly briefed, perhaps?

It does seem true that Cameron Slater endeavours to promote ‘professional services’ by un-named ‘advisors’ eerily similar to Simon Lusk’s services (noted above). For example, Cameron’s advice to Maggie Barry on losing the Botany selection.

If Maggie does decide to pursue a career with National she should do what this blog recommends to all candidates. Get proper professional advise [sic] from discrete [sic] and competent people with a track record of winning. There are a number of people who work behind the scenes and shun publicity, and candidates can call the tip line for their details.

Gee. “… discrete [sic – presumably he means discreet] and competent people with a track record of winning. … people who work behind the scenes and shun publicity“. Does that sound like anyone you can think of?

Then there’s this, which the blogger at The Standard suggests is actually an example of Simon Lusk ghost-writing for Cameron:

Some boneheads in the Auckland region [National Party] hierarchy have been putting about that candidates should not pay for advice or pay for strategy. They are as prissy and as puritanical as the old amateur era rugby people and need to stop this silliness. Laughably the main proponents of this argument are people who earn a living by charging for their services themselves.
If you want to be a National candidate there is a very small group of talented, experienced professionals who will greatly enhance your chances of winning. Yes they will cost, but who else won’t you pay – your lawyer, your accountant, your printer, your speech coach, the petrol station for the gas to get to delegate meetings? Professional advice costs money all over town, why not in politics?
What I can’t understand is why paying for someone who gives you the best chance of a long career in politics is wrong or unethical or whatever else the buggers muddle in Auckland seem to think is reason for not engaging professionals. Aspiring candidates should call the tip line if they want introductions to competent political advisors.

Look, I’m not sure about the ghost-writing charge, but it seems pretty clear what’s being promoted. I haven’t asked him (Juana doesn’t like it when I ask such questions) but like his anti-MMP advocacy, Cameron is probably promoting those professional ‘advisory’ services for aspiring National Party candidates as a hobby. 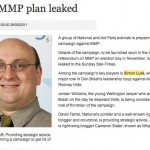 My only previous awareness of Simon Lusk was that he was, along with the National Party’s sometime employee/contractor/supplier of ‘marketing services’ David Farrar reported to be a part of that (failed? Too soon to tell) anti-MMP lobby group Brian Rudman referred to above … the one which expended large amounts of money on nasty ‘play the man’ personal denigration advertising (after promising not to) to influence the MMP referendum. Simon Lusk’s Jedi apprentice, junior lawyer Jordan Williams (observed to be servicing Don Brash’s media/PR needs during the ACT leadership coup) was the frontman, presumably because Simon Lusk “believes campaign managers should be behind the scenes and that being in the media does not win votes for clients.”
—
As I said, Simon Lusk been named as a ‘suspect‘ in the leaks regarding the ACC-Bronwyn Pullar affair.

Confirmation that Privacy Commissioner Marie Shroff will investigate the email’s trail from Ms Boag to an eventual report in the Herald on Sunday came as Labour claimed Ms Collins, National Party operative Simon Lusk and right-wing blogger Cameron Slater all played a part in the leak.

It all just makes me curious. And raises the questions: So, who is Simon Lusk? Why is he keen to keep such a low profile? And why isn’t he actually succeeding at that?