« Against expectations
Hunting for a word »

We’ve discussed ‘Black hat’ web ‘marketing‘ tactics before, in the context of so-called experts selling punters hyped-up snake oil like the Shaun Stenning-fronted Geekversity and, once that had collapsed, the Twalk and Snipr equally hyped and ill-fated enterprises that the Stenning performing troupe hawked around Asia like a cargo cult until the wheels fell off that too. 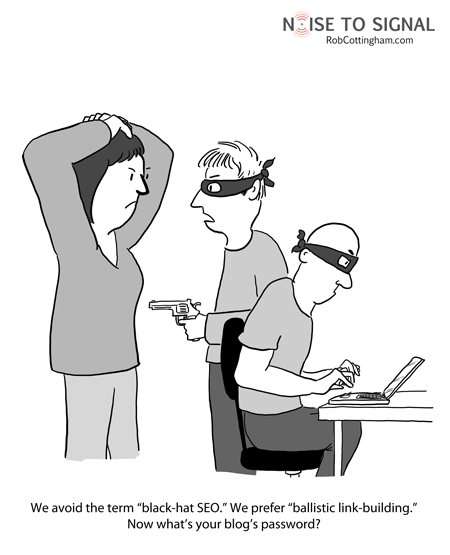 I guess at the root of things, my criticisms of the marketing hyperbole and the apparent misleading claims made by those claiming to be instant internet experts were based on a (negative) judgement of the ethics of those involved.

Ethics, like integrity, is a word I try to use very sparingly, knowing as I do that such swordy words are two-edged and, as my conversation about a sometime blogosphere propaganda channel showed, even an implied use can open a critic to being labelled ‘gay‘ for suggesting truthfulness and playing fair have a place.

So, it was with interest I spotted this cartoon and brief article by Rob Cottingham today, which puts a discussion about marketing deceit and what in politics we call ‘spin’ into a different, but related context. On the peripheral but interesting.