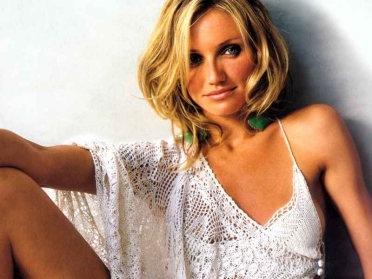 Now why would I put a picture of Cameron Slater here, when I can use this one of Cameron Diaz? Mmm-much nicer. (cameron-diaz-online.com – click)

I am troubled (but not ‘shocked‘ or ‘outraged‘) by a demonstrated lack of what I called ‘fair-mindedness’ and the occasional deployment of untruthfulness (I regard that as a far more serious breach) I observe in some political blogs, some of whom really fancy themselves as opinion shapers.

the way I see it, a reasoned, fair-minded discussion is easier to listen to, and more effective communication than tone-deaf, one-speed-only, reflexive attack blogging. Being ‘fair’ builds a reputation for credibility … and is far more likely to open mainstream media doors. (Which was my point in the footnote here.)

What I also notice is the dubious machinations of some parasitic* bloggers are frequently accompanied by a stream of gibes and criticisms aimed at ‘mainsteam media’.
Those working in MSM make an easy target because the professional journalism model — with its adherence to professional standards, its coverage demands, priority setting, editorial process and legal obligation to be truthful — is inevitably slower than some dork in his or her pyjamas spraying bilious vitriol at those on their ‘enemies list’.
[*Parasitic bloggers (and that’s most of us) take far more content and ‘inspiration’ from MSM than the reverse, in my observation. Some of us have the grace to admit our debts, some don’t.]

The doctrine of fairness is an important one, despite the overt disavowal by enraged ‘partisan bloggers’. 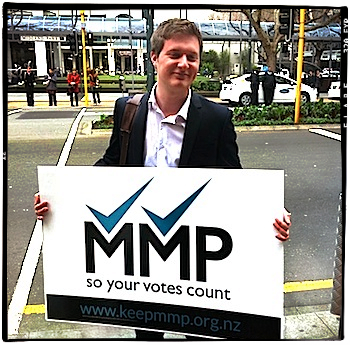 Are state employees entitled to ‘campaign’ for an upcoming referendum on their own time? Photo of Jordan King with placard in Wellington – adapted from an image made by anti-MMP activist Jordan Williams and secretly supplied to right wing proxy and attack blogger Cameron Slater for use in his ongoing smear campaign against supporters of KeepMMP.org.nz (click)

One of my ‘targets’ (in the nicest possible way) right wing proxy and attack blogger ‘WhaleOil’ Cameron Slater denies being a journalist — preferring to run barefoot and naked through the lush grass of the social media jungle as a ‘partisan blogger’.

Here’s Cam’s response to my challenging him about selectively omitting relevant facts from a seedy little smear on a public servant waving a placard around in Wellington [allegedly] in his lunch hour.

Peter, FFS, I’m not a jour­nal­ist, I’m a par­ti­san blog­ger, when will you fuck­ing under­stand that?

Well, sorry, but that seems like bullshit when Cameron, in fine Armchair Quarterback style, frequently deigns to criticize and castigate MSM (mainstream media) for [allegedly] ‘following’ bloggers and generally doing a poorer job of covering news that he cares about than he does, questioning their ethics(!), intelligence and competence…

I’ve lost count of the num­ber of times that I have bro­ken sto­ries and the repeaters ahve (sic) foll­woed (sic) along one, two (sic) or even a week later. It would be nice of them to insert a line acknowl­edg­ing where they heard about it from.
The thing is I know they heard about it from me first, because they all fol­low my Twit­ter account and read my Face­book wall. I’m sure as hell not fol­low­ing them on Twitter.
When blog­gers use news sto­ries to high­light their opin­ion they politely pro­vide a link to the source story, it would nice if chur­nal­ists and repeaters did the same.
I might have to start billing I think. Either that or the various schools of churnalism start teaching these chumps about ethics, [Comment: See?] how to google, how to link to sources and other useful topics instead of them sit­ting on Face­book and Twit­ter hop­ing a story will land in their lap.)

Good grief. Cam I’m-not-a-journalist Slater has even (FFS) developed his own rating system for journalists. I’m not kidding. See: 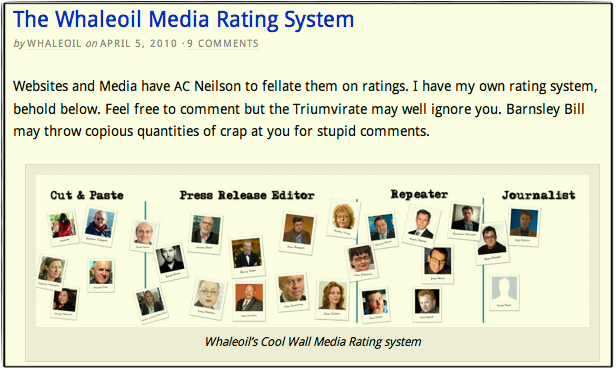 So what we’re dealing with is a bloke who sees the standards of ‘ethics’ and ‘truthfulness’ don’t apply to his online alter ego because he’s ‘not a journalist’, he’s a ‘partisan blogger’ … but he’ll happily judge them on some twisted model of his own design about their ethics and competence. Yes. Inconsistent to say the least. Or fruitcake levels of self-deception.

So, what about these guidelines developed earlier this year among middle eastern bloggers and others? This Code of Ethics for Citizen Journalists was created by bloggers operating in the blood-soaked crucibles of the Arab Spring and elsewhere, fighting bigger battles than ours.
I’ve reproduced them in full because I think they’re worthwhile.

This code was established by young citizen journalists from the MENA region and Iran, with the help of traditional journalists namely Kelli Arena, Magda Abu-Fadil, and Digital Strategy Consultant Ayman Itani, during the last session of a workshop on “Citizen Journalism, Professionalism, and Ethics”. The workshop was organized by the National Democratic Institute and ASWAT in Beirut from July, 25, 2011 to 27.
It is highly recommended for this code to be shared in order to “increase the professional standards of journalistic reporting for citizen journalists”.

Perhaps bloggers in less contentious parts of the world, dealing with far less contentious issues (like, gee, our upcoming referendum on our Mixed Member Proportional Representation electoral system — which the Egyptians, Libyans, Syrians, Iranians, Yemenis, etc would die for) might benefit from adopting some of these ethical standards? What do you think?

Why would a propagandist use a slogan like ‘Keeping the buggers honest’ then dissemble and mislead about his and his friends’ enemies? Whacky.

It’s ludicrous for Cameron Slater to try to hold himself out as some sort of political-moral-media monitor and enforcer, castigating his enemies and even using a slogan like ‘Keeping the buggers honest’ … and then act in an unfair, dodgy way.

For instance, like not revealing that he’s doing anti-MMP Vote For Change spokesman Jordan Williams’ dirty work, then, when confronted about it, saying ‘journalistic’ standards of ethics and honesty don’t apply to him — nor is he bound to Vote For Change‘s pledges to act with ‘integrity in the campaign’ (cough), ‘Play the ball not the man’ (hack) and refrain from negative personal attacks. (splutter) because he’s not formally a member. (No, he’s just a PR conduit.)

Unlike some of Cameron’s critics such as Andrew Geddis (‘Cameron Slater’s slighty wonky jihad‘), I have had the pleasure of his company and find him interesting, informed and insightful. I look forward to our next meeting. Cameron is entitled to his political opinions, of course, about MMP and any other matters like our name suppression laws & legal conventions, and, if he so chooses, to attempt to persuade and proselytize on behalf of the sleazy Vote For Change propagandists seeking to reduce representation in our electoral system. I guess. (See what I did there? Irony.)

But it would be better if he was honest about it.