« Inside joke: Pete says creepy things
So, who is Simon Lusk? »

Following up on our conversation about differing measures of openness to ideas, depending on self-identification as ‘conservative’ or ‘liberal’ … 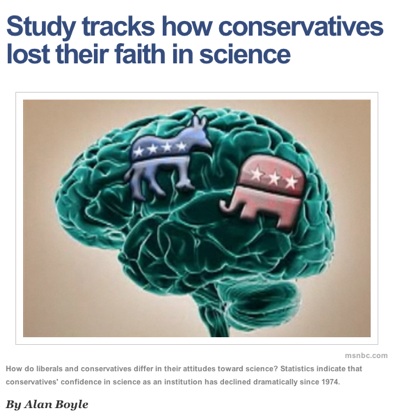 Study tracks how conservatives lost their faith in science

How do liberals and conservatives differ in their attitudes toward science? Statistics indicate that conservatives’ confidence in science as an institution has declined dramatically since 1974.

An analysis of 36 years’ worth of polling data indicates that confidence in science as an institution has steadily declined among Americans who consider themselves conservatives, while confidence levels have been at steadier levels for other ideological groups.
The study, published in the April issue of the American Sociological Review, provides fresh ammunition for those who complain that conservative views on issues such as climate change are at odds with the scientific consensus.
“You can see this distrust in science among conservatives reflected in the current Republican primary campaign,” Gordon Gauchat, a postdoctoral fellow at the University of North Carolina at Chapel Hill’s Sheps Center for Health Services Research, said in a news release from the American Sociological Association.
“When people want to define themselves as conservatives relative to moderates and liberals, you often hear them raising questions about the validity of global warming and evolution, and talking about how ‘intellectual elites’ and scientists don’t necessarily have the whole truth.” … > continued at msnbc

Yeah, I hear quite bright people who pugnaciously claim ‘the jury is still out on climate change’ not from any scientific standpoint but from the standpoint of that scientists are corrupt/cowed/idiots/gullible/godless.

Ideology, in other words.