« Stating the obvious/sympathy for the dev… uh, Gizmodo’s Chen
True or false doesn’t seem to matter to liars »

Landing in my in-box this afternoon … A promotion for an upcoming ‘not another property seminar’ with Kieran Trass, fresh from his stint at the NZ Property Guru’s [sic] hard-sell roadshow …

What a line up!

Starring Kieran Trass as ‘The Property Investment Genie’.
Well!
Knowing Kieran as I do, I might have plumped for a different imaginary magical character. 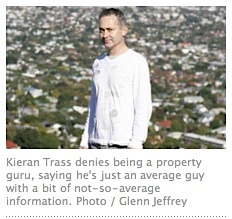 In June 2008 the NZ Herald reported Kieran Trass DENYING being a property guru.
I guess that was then, this is now.

How about: ‘The Property Investment Leprechaun‘ … or maybe ‘the PI Pixie‘?

In addition to Kieran’s star turn as a genie, there’s also going to be a Shoe Bomber Terrorist (!) and a Professional Belly Dancer. Oh boy!

I swear I’m not making any of this up. I can’t help but wonder if this is NZ Property Guru’s [sic] marketing genie-ass Shaun Stenning‘s influence?

I haven’t seen Kieran’s costume. I’m sure it will be good, but I think Dean Letfus’s clown suit and blue wig will take a lot of beating. What fun!