True or false doesn’t seem to matter to liars 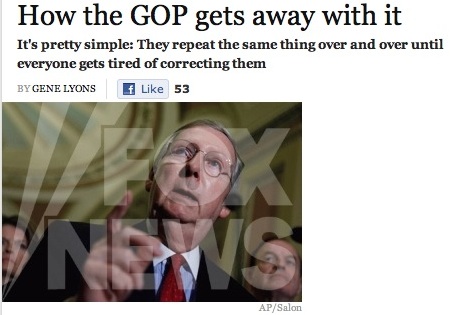 Some people put so much energy into pretending they're advocating the exact opposite of their actual agenda. (image: Salon.com)

This is a really good essay about dishonest argument — which is one of my bugbears, as we have discussed before. It’s about US politics, but many of the points apply to the business of selling as well.

Salon’s Gene Lyons examines the tactics deceivers use — repeatedly telling bare-faced lies or claiming the exact opposite of the truth about their intentions are two favourite tricks — and explains that these lying rats are often cunning but intellectually bankrupt:

Say what you will about academia, in professorial debate so blatant a misrepresentation would be seen as a shameful confession of weakness.

Somebody who can’t win an argument without resorting to a simple “black is white” lie gets as little respect as he deserves.

When I read the naked and unsupported assertions repeatedly made by some of the creatures whose claims I examine critically here and elsewhere — self-proclaimed ‘experts’, spruikers and their gums-for-hire — I’m always struck by their near-total lack of  … what? Conscience? Self-awareness? Decency?

It would almost be humorous if there weren’t victims.

Some of these operators put so much energy and skill into convincing you they want to make you rich … and all you have to do is just buy their snake oil.

They are as intellectually crooked as they are in other ways and probably lie to everyone around them.

Like the politician in Lyons’ piece, they mean the exact opposite of what they say they’re there to do. They’re glib salesmen who are very slick about how they sell, practise their disarming arts, and in some cases studiously polish and apply ‘pseudoscientific’ persuasion/manipulation techniques … seeking to become ‘better’ at their deceitful craft.

Sadly, the quote wrongly attributed to PT Barnum: ‘There’s a sucker born every minute’ seems to keep them employed.