« The ‘message’ of SHAME
The Marshmallow Theory — finding a soft centre »

And the spin goes on … Shaun Stenning’s latest 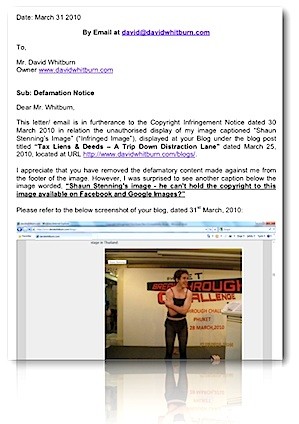 Here’s Shaun Stenning‘s latest effort to get the genie back in the bottle … by (again) threatening legal action and spinning a yarn about how copyright works. It’s interesting to see how he operates.

Read the full letter here (160k PDF) for yourself and see how plausible you find it.

Background: A bunch of very recent pictures of Shaun Stenning on stage in Phuket stripping down to women’s pantyhose and a variety of novelty g-strings were published on Facebook by several event attendees and Facebook ‘friends’ of the Stennings. All in good fun, judging by the smiles on everyone’s faces.

Whitburn issued a ‘commercial alert‘, saying the full facts about these US tax liens were NOT being presented in the ‘gurus’ hard-sell pitch and highlighting the fact the Dean Letfus himself publicly slated them as “snake oil” less than a year ago.

As reported earlier, that blog attracted a couple of poorly-drafted threatening letters, apparently from Shaun Stenning (although one was in Dean Letfus’s name), whose ‘concerns’ ranged across a variety of somewhat implausible intellectual property claims and the inclusion of supposedly defamatory statements and images.

The truth can hurt

To me, Whitburn’s carefully-worded blog read like honest opinion, based on first-hand experience. It looks to me as if his conscience and concern for others compelled him to speak out.

Now, this second letter (31 March 2010) from Shaun Stenning has arrived, and tells a story of the embarrassing photo having been taken under his direction (?) asserting copyright and all rights are ‘held’ by the person wearing the pink g-string. (What about all the photos taken by other participants?)

In scrambling to suppress the images and — probably more to the point — negative comments, Shaun Stenning and Dean Letfus are, it seems to me, trying to bend reality.

They’re entitled to try to engineer their reputations, of course. I’ve noticed that about Dean Letfus before. But making implausible claims that this-or-that “amounts to Copyright Infringement in terms of national and international Copyright laws” merely makes them look ridiculous … or worse. (See my earlier comment about the NZ Copyright Act’s provisions for ‘fair dealing for the purposes of criticism, review and reporting’.) No ‘infringement’ has taken place, in my view, despite the bald assertions of the threatening letters.

Accusing David Whitburn of “publish[ing] [the photo] for your personal gains, (sic) and particularly when you (sic) use or publication is for your commercial benefits (sic)” as the letter does, also strikes me as nonsense.

As if he’s charging people to look at it? Come on! How is David Whitburn exploiting anyone’s intellectual property? No-one’s collecting money except Shaun Stenning, Dean Letfus and Steve Goodey. To complain that Whitburn’s comments are somehow commercially-driven is unsupportable, in my view. It’s trying to dodge the criticism by using the time-worn tactic of smearing the critic. (No surprise.)

Whitburn, it seems to me, is just speaking up with his concerns about a very questionable (in his view) sales operation being run by these roosters, having been himself burnt and witnessing first-hand the Blue Peak fiasco involving some of the same cast of characters.

Fair enough. It may madden the hell out of them, but they’re getting the respect they deserve.

* It crossed my mind that an investment statement and registered prospectus might be required for these US tax lien-based ‘offerings’. I don’t know — I’ll leave such musings to the Securities Commission.