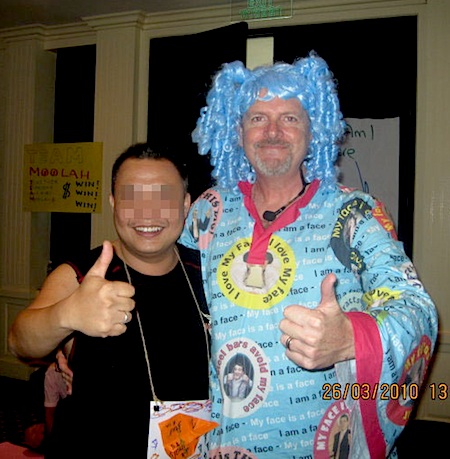 Earlier this week I pointed to lawyer/investor/whistleblower David Whitburn’s blog in which he shared his concerns about the way US tax liens were being sold to naive NZ investors by a new company called “NZ Property Guru’s [sic]”.

As I see it, Whitburn’s blog post is a clearly written, well-supported and detailed explanation of his concerns about the sales methods and marketing materials these operators use to sell US tax liens. His comments are based on his personal observations and direct experience. He covers some of the background and inter-connected history of the spruikers involved: Dean Letfus, Phil Jones, Steve Goodey and (new boy in town) Shaun Stenning.

Whitburn also quotes Dean Letfus’s previous publicly-expressed disgust and criticisms of the US tax liens (“They are snake oil, complete with white shoes and wagons”, Letfus said, calling them “high risk”) and, like me, Whitburn wonders Dean? What on earth has changed? and issues this warning:

I personally take issue with a number of things in the presentation so feel I have to issue my own commercial alert as a result of NZ Property Gurus not telling the audience all that they need to know; namely: …
(Whitburn’s eleven points follow — read them all here)

Two poorly-drafted threatening letters (see below) arrived by email a few days later: one from Shaun Stenning, taking exception to Whitburn’s use of a recent Facebook photo (apparently one of a series showing Stenning on stage dressed in women’s underwear) and a statement which Stenning says shows him in ‘poor light’.

Your use of my photograph and the defamatory and disparaging statement made by you in your Infringing Blog Post show me in poor light and amounts to libel in terms of Defamation Act of 1992. The statement made by you has not only hurt me emotionally but has also damaged my reputation in the [sic] business circles.

Another letter,  purporting to be from Dean Letfus as ‘Owner’ of NZ Property Gurus Limited claims ‘copyright infringement’ and also objects to statements and use of a photo that ‘hurts emotionally’ etc.

This notice is in reference to the reproduction and use of the image as available [sic] at [NZ Property Gurus Limited] Company Website in your Blog post titled “Tax Liens & Deeds – A Trip Down Distraction Lane” dated March 25, 2010, located at URL http://www.davidwhitburn.com/blogs/ (Hereafter “Infringing Blog Post”), use of leaflets of “MillionareMastery VIP Programme” and use of my photograph and the disparaging and defamatory content against me [sic] in the Infringing Blog Post, none of which is authorised by the [NZ Property Gurus Limited] Company or myself.

Your reproduction and use of the image as available at Company Website and the leaflets of “MillionareMastery VIP Programme” in the Infringing Blog Post, without the company’s express consent is a clear case of Infringement of [NZ Property Gurus Limited] Company’s Copyrights in violation of the national and international laws.

Your use of my photograph along with the statements made by you in your Infringing Blog Post do not state the correct factual position and show me and the [NZ Property Gurus Limited] Company in bad light. Such defamatory and disparaging statements, amounting to libel in terms of Defamation Act of 1992, has not only hurt me emotionally but has also damaged mine and [NZ Property Gurus Limited] Company’s reputation in the [sic] business circles.

Now let me tell you from experience, this statement allegedly from ‘Dean Letfus’ claiming that reproduction of images from websites for illustrative purposes is “…a clear case of Infringement of Company’s Copyrights in violation of the national and international laws” is, in my view, fantasy.

David Whitburn’s use — and my use, any number of bloggers’ use (including Letfus & ‘geekversity’ guru Stenning) — of published images from various websites in this manner falls easily into the ‘fair dealing for the purposes of review, criticism and reporting’ provisions of the Copyright Act — in this case illustrating criticism and a statement of honest opinion. There’s been no attempt to appropriate or commercialise someone else’s intellectual property or claim it as one’s own. To say otherwise is nonsense.

Looking at the photos of Shaun Stenning wearing pantyhose over a pink G-string and Dean Letfus wearing clown pyjamas and a curly blue wig, it’s understandable they may feel embarrassed the next morning … but WHY DRESS LIKE THAT? and WHY POSE FOR PHOTOS?
Unless these images are faked (seems unlikely), how can they be ‘untrue’ and defamatory? (And these aren’t the worst, apparently.)

Hello? It’s called Facebook Shaun and Dean — have you heard of it?
One’s Facebook ‘friends’ can publish all sorts of ‘stuff’ on the internet, tagging you in photos — it may be awkward at times, but not ‘illegal’.

It’s the same with YouTube (embarrassing, but already published):

You can read the threatening letters from Shaun Stenning and someone claiming to be Dean Letfus in full here: PDF_200K

The far bigger issue, of course, is whether the US tax liens ‘package’ being so aggressively promoted by these self-proclaimed NZ Property Gurus is a worthwhile investment.

David Whitburn doesn’t think so and gives his reasons.
A year ago neither did ‘guru’ Dean Letfus — but now he’s selling them! (No joke.)