A couple of days ago in my post Dean Letfus: change of heart or rudderless mercenary? I discussed the comprehensive about-face demonstrated by property spruiker Dean Letfus who criticised US Tax Liens as ‘snake oil’ — he even warned the investing public to steer clear of them and the (according to him) dubious characters hawking them to Kiwis. 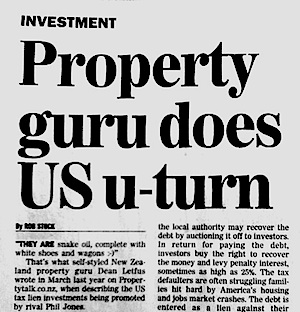 I pointed out that he seems to now be actually promoting the same US Tax Liens and the same sales personnel through his NZ Property Gurus … er, sales operation (whatever). That’s since been the subject of some news media attention (well, the turnabout is striking, let’s face it.*): Property guru does US u-turn (Sunday Star Times 18/7/10)

His [Dean Letfus’s] earlier opposition had, he said, been partly based on his personal antipathy for Jones, as well as other factors such as exchange rate risk and what he saw as excessive costs.

But Letfus said his new view was based on a changed exchange rate position, as well as the tax lien education being sold at the seminar being delivered by Steve Goodey in New Zealand rather than out of the US.

“Because Steve’s involved and people are making good money out of it, and the world has a totally different look to it, it is a good opportunity for some people.”

“… a good opportunity for some people.” Yeah right. Pardon my cynicism. Let me guess WHO is (generally) ‘making good money out of it’. Yes, the spruikers! (As for Steve Goodey’s alleged ‘tax lien education’, oh please stop! I can’t breathe!)

Today, in this post I’d like to share some thoughts about why I think buying property or get-rich-quick ‘unique opportunities’ (like US tax liens) from people claiming to be ‘investment property educators’ or ‘mentors’ or ‘gurus’ (or even ‘good friends’ of such claimants) can be fraught with difficulty and hidden traps.

Since he’s been cited, I’ll focus (for illustrative purposes) on the activities of the individual Dean Leftus claims showed him the light regarding last year’s dodgy “snake oil”, this years ‘golden opportunity’ US Tax Liens: Steven Goodey. 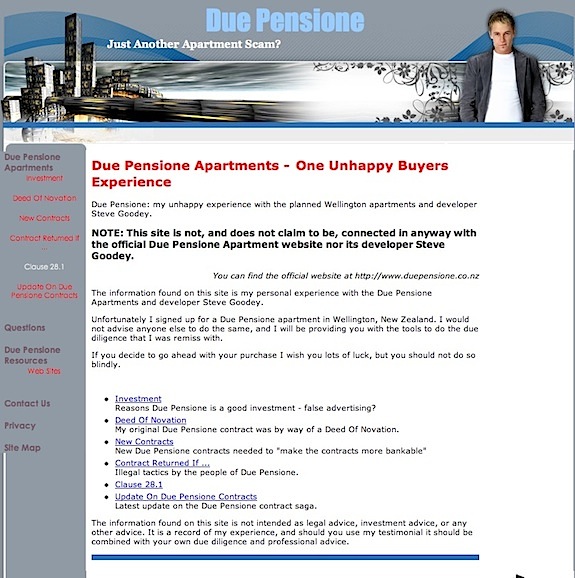 Dean McNamara spoke up about his issues with Steve Goodey. (click to view as PDF)

Questions To Consider With Due Pensione Apartments

You might like to consider the following points as part of your due diligence on a Due Pensione apartment.

• Once consent was granted for the project the developer devalued each apartment by at least $20,000 to make the project look more attractive to the banking establishment. So much for the capital gain.

• The project does not yet have financial backing. Will the developer decide to drop the price again to sell more units?

• If the project gets funding and goes ahead but not all units are sold, will the developer, given his track record, have a fire sale once the building is complete or near complete to quit the rest of the apartments?

• Many of the original purchasers were looking for the capital gains between plans and completion – they will be looking to sell before completion, or soon after. What effect will this have on the value?

• Apartments fall harder and take longer to recover than most other real estate in an economic down-turn. Not helped by the number of scams that have plagued the apartment market.

• They have [allegedly] illegally tried to bind me to two contracts on the same on the same property at the same time.

• They will not release my deposit after I decided to exercise my [allegedly] legal right to abandon the property after doing my due diligence on the second contract.

• They are trying to force me to hand over this website and sign a non-disclosure contract in order to get my [allegedly] legally entitled refund.

I am, for reasons too numerous to go into here, sensitive and understanding of the plight of developers caught in a property market downturn (see How to Survive and Prosper in a Falling Property Market) but let me say this, publicly, to Steve Goodey:

Expecting your buyers to just ‘deal with’ your vaporising assurances of anticipated capital gains, issues with pre-completion sales, prolonged construction/development delays, multiple S&P contracts (?), your own issues with banks/funders being invoked in discussions re ‘unanticipated’ or pressured settlements .. and THEN making demands of non-disclosure to sweep it all under the carpet …

As noted earlier, I have no tolerance for property ‘educators’ and ‘mentors’ who sell property to their ‘students’. I’m not the only one (PDF) who sees it as crossing an ethical line.

We know Steve Goodey travelled around the country as co-owner of the Richmastery Wellington franchise (“Richmastery — Educators, Investors, Experts” — was their tagline … no mention of being unlicensed real estate agents collecting commissions for selling real estate) enthusing audiences at so-called ‘educational events’ about the big bucks to be made buying apartments off the plans. e.g. from the now-defunct Richmastery website: 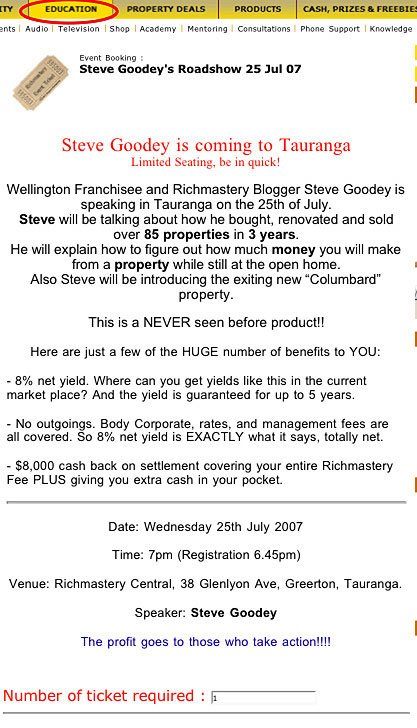 Note that this 'roadshow' was presented as an 'Education' event. Does that sound familiar to the NZ Property Gurus

So it appears, from the look of things (joining the dots) that as well as hawking the “NEVER seen before product!!” Columbard apartments, at some point the ‘educator’ Steve Goodey sold — through Richmastery — apartments in HIS OWN developments … pitching them as, according to Mr McNamara’s published records “a great opportunity to purchase and sell prior to settlement for a potential profit.” Which was eerily similar to Dean Letfus’s hyperbolic sales pitch for Sponge Bay sections (PDF) … with similar (how shall we put it?) disappointing results.

Read this letter/contract (below) and ask yourself if you see any possible conflict of interest in this situation? What catches my eye is, as mentioned, Steve Goodey was (a) Richmastery Wellington franchise owner and (b) 100% shareholder and sole director Haining Street Trust Limited (vendor) according to a Companies Office search. 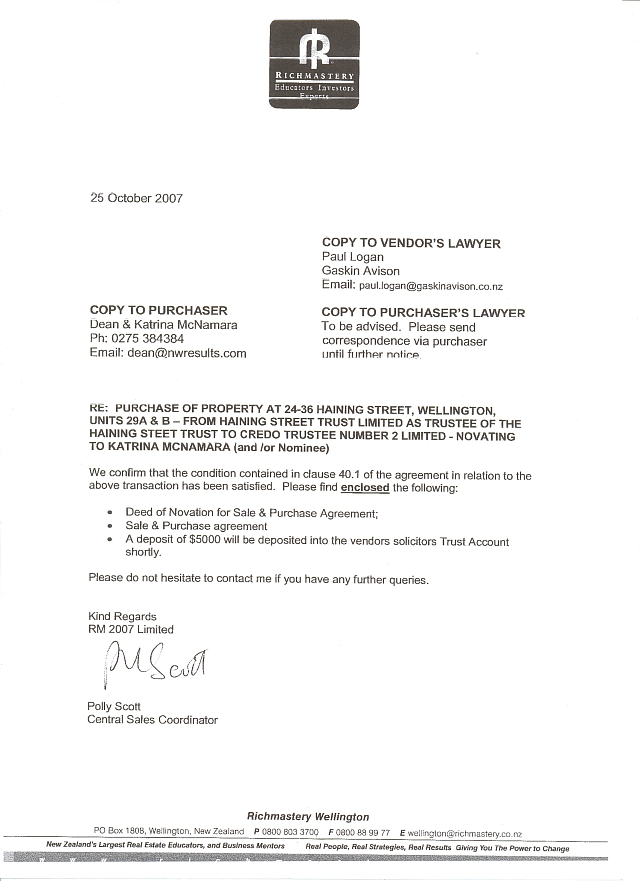 Proof positive that some sleazy so-called 'educators' sell property to their 'students'. 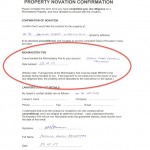 'Educators' Richmastery charged their students a fee — to 'find' an apartment in RM franchisee Steve Goodey's development! (click to enlarge)

At some point, it seems, the self-described “unhappy buyers” wanted OUT of this deal on various substantive grounds. And that seems fair enough to my untrained eye, based on the material they highlighted on their website.

The question that often swells in my mind when faced with this kind of information is simple:

Jeez, if these spruikers are such zillionaires (as they claim), why don’t they just reach into their pockets and put things right? Chiseling this wannabe ex-buyer for a few thousand dollars as appears to be the case here, seems strange behaviour for a zillionaire. Are buyers for the “opportunity” so scarce?

Now that the Richmastery enterprise has disintegrated (and been shut down), the likes of former Richmastery ‘mentors’ Steve Goodey and Sean Wood, their acolytes, former associates and helpers have scuttled off to new ventures — such as the (in my view) truly ghastly NZ Property Guru’s [sic], PropertyTeachers, PropertyTutors, MillionaireMastery, iProperty … and who knows what other self-proclaimed ‘investment property educators’ (dis)guises next?

Call me suspicious if you like, but it seems likely to me, given the history, that they’ll be running a similar operation in their new livery. Ask yourself: Can a leopard change its spots? Or, to use a more colourful expression: ‘Same shit, different paddock.‘

This example demonstrates that spruikers like Steve Goodey (a few Dean Leftus examples here) have a track record of using ‘education’ as bait and window-dressing for real estate sales — followed by what I think can fairly be described as less-than-straightforward business dealings.
My recommendation: AVOID THEM.

* Read Rob Stock’s fairly comprehensive March 2009 article about US Tax Liens, if you care. Spruiker Steve Goodey was selling them then, and he’s selling them now.

These are the facts as I understand them and the commentary expresses my honest opinion. If I’ve misunderstood or misinterpreted any matters discussed here, I invite those concerned to contact me directly to clarify or correct any issues of fact, using the email address here. It’s not my intention to mislead. Comments are open.
Regards, Peter Aranyi. © 2010 All rights reserved.