A gushing review from Steve Goodey

Well, the reviews are in: Wellington property spruiker and US tax liens “educator” Steve Goodey tackles the complex and intellectually demanding task of identifying the raison d’être of www.thePaepae.com.

(If the name is familiar, I discussed some of his past … um … ‘activities’ in this post Property spruiker Steve Goodey: let’s join the dots.)

In a clearly heartfelt blog post entitled ‘Why do we need to bash the competition?’ Dean Letfus’s accomplice business partner cries out to the world in anguish: ‘What’s wrong with us?’

What boggles me is the tactics that a lot of the people in the industry use to promote themselves, or rather to discredit each other. … surely there must be a better way to market ourselves than to figure out who the competition is and start taking pot shots.

For instance I’ve had many conversations with Shaun Stenning who knows and [sic] awful lot about the Australian Seminar, Wealth creation and internet marketing industries, and he is bemused and appalled with how this country acts.

In Australia it seems there is a gentleman’s agreement that you don’t “Bag” the opposition for your own gain.

The only real exception to this rule is if you really genuinely feel that someone is fraudulent and in danger of injuring the industry in which case the serious fraud office is probably the first place to go rather than giving someone a public bashing.

“…right here in New Zealand we have a large number of websites, blogs and educators who seem to think that the best way to promote themselves is to drag down any and everyone else.”

A “large number of websites”, Steve? Any in particular? Got any examples?
Why, it’s as if he read my mind! …

This line of discussion wouldn’t hold much water without an example but in giving one I risk looking like the same type of person that I’m rallying against so I apologize if it comes off that way.

Having said that a prime example would be the blog www.thepaepae.com,   [Comment: Aye Carumba!] this is a blog site written by Real Estate publisher Peter Ayrani. [sic]

The site seems to be the odd post about publishing or the internet used to glue together a tyrade [sic] of abuse aimed at Dean Letfus or anyone remotely related to Dean.

I struggle to adequately explain my point of view often because I’m really somewhere between average and rubbish at writing these blog post’s [sic] and so it just annoys me even more that Mr Ayrani [sic] makes it all seem so effortless and really does have great skills in use of the written word.

Peter really does write very well and manages to find no end of ways to bash, smite, smear, and do no less than bludgeon Dean Letfus with every second or third of up to 2 post’s [sic] per day.

You have to wonder what sort constructive endeavors could be achieved if this ability and effort were pointed toward a more productive outcome.

This is simply an example and not typical of everyone in the entire industry but it does highlight my point, which is that when you throw mud everyone ends up covered in mud and the client is never any better off.

Well! How nice of him. And he’d ‘really like to hear your opinion’… so I replied. Umm… but the reply is, um, not showing on his blog … for some reason … yet. So, here it is: 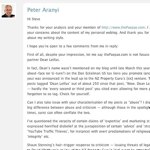 Thanks for your analysis and your mention of www.thePaepae.com. I appreciate reading your concerns about the content of my personal weblog. And thank you for your compliments about my writing style.

I hope you’re open to a few comments from me in reply:

First of all, despite your impression, let me say thePaepae.com is not focussed on your business partner Dean Letfus.

In fact, Dean’s name wasn’t mentioned on my blog until late March this year when his striking about-face (or U-turn?) on the Dan Eckelman US tax liens you promote (and his partnership with you) was announced in the lead up to the NZ Property Guru’s [sic] venture. There have been 18 posts tagged ‘Dean Letfus’ out of about 250 since that post, “Wow. Dean Letfus = Phil Jones (?)” — hardly the ‘every second or third post’ you cited even allowing for more posts I may have forgotten to so tag. Check for yourself.

Can I also take issue with your characterisation of my posts as “abuse”? I disagree Steve. There’s a big difference between abuse and criticism — although those in the spotlight (myself included at times, sure) can often conflate the two.

I’ve questioned the veracity of certain claims of ‘expertise’ and marketing statements. I’ve expressed horrified disbelief at the juxtaposition of certain ‘advice’ and ‘strategies’ promoted (the ‘YouTube Traffic Thieves’, for instance) with overt proclamations of religious convictions and ‘integrity’ etc.

Shaun Stenning’s hair-trigger response to criticism — issuing threats of legal action (‘defamation’) to David Whitburn’s review of the NZ Property Guru’s [sic] event he attended was also an eye-catching episode. I felt interested to share a few thoughts and opinions about that at the time on www.thePaepae.com — er … it’s a blog, Steve, after all.

If you can, Steve, I’d really appreciate it if you could point out any INACCURACIES or ERRORS OF FACT in anything I’ve blogged about Dean Letfus … or yourself for that matter.

I’m sure your comments about me setting out to “bash, smear, and smite” Dean or anyone associated with him are heartfelt. They certainly read that way. But Steve, from my point of view, that’s really not a true reflection of my goals for the blog. (I think I can understand how and why you reached that conclusion, however.)

No hard feelings at my end. Judgements, yes … but no ‘hate’, I assure you.

The only thing I’d add (besides saying how nice it is to hear from a regular reader of my blog) is that I don’t regard myself as ‘competition’ for Steve Goodey or Dean Letfus, and we’re not in the ‘same industry’. Draw your own conclusions, however. – P