Ugh. I’ve just been slimed (again) by a man I personally regard as a dishonest and obnoxious bully-boy. So, in keeping with my general policy of confronting and directly answering criticism, here’s a response: (Only read it if you’re actually interested … OK?)

It was a case of ‘speak of the devil’ — A couple of weeks ago, as discussed in ‘A little backlash?‘, a sock-puppet called ‘Don Smith’ popped up on spruiker Steve Goodey’s only-if-you-agree-with-Steve comment stream to praise fellow spruiker/internet ‘guru’ Dean Letfus … and to tell the world what a terrible, stinking hypocrite I [allegedly] am.

He referred to when I was a plaintiff with others in a lawsuit against a now-defunct get-rich-quick outfit called Richmastery run by former electrician Philip Ronald Jones, formerly of Hillsborough and Takanini.

In an effort to prove I’m no ‘Mister High and Mighty’ (yeah, he actually called me that!) ‘Don Smith’ alleged that Empower Leaders had included plagiarised material in the book How to Survive and Prosper in a Falling Property Market [supposedly, according to ‘Don Smith’] infringing the copyright of ‘another leading author’. (Yeah right.)

I answered the bogus charge (as you do), pointing out there’s a big difference between plagiarism — passing off someone else’s work as your own — and fully-attributed references to another author’s work for the purposes of review and criticism … which is allowed under the ‘Fair dealing’ provisions of the Copyright Act (without the need for ‘permission’, despite ignorant or ill-motivated commentary to the contrary. Ask a lawyer.)

(1) Fair dealing with a work for the purposes of criticism or review, of that or another work or of a performance of a work, does not infringe copyright in the work if such fair dealing is accompanied by a sufficient acknowledgement.

In passing, I mentioned to ‘Don Smith’ that someone else had previously made those same untrue allegations:

A similar fanciful tale was promulgated by the Richmastery supremo as a last wail of anguish over being held to account for their comprehensive and admitted plagiarism.)

This week, out of the blue, I was directed to a new website belonging to that same Richmastery supremo: ‘Mr Phil Jones, the Connector’ he calls himself now.

[Speaking of connections, Steve Goodey was the Wellington Richmastery franchisee, and one of their spruikers, even selling apartments in his own developments to Richmastery ‘students’. For a while, Goodey partnered with Richmastery’s sole company director Phil Jones to sell US tax liens to NZ investors before jumping ship to offer the same ‘snake oil’, um … ‘opportunity’ to investors through NZ Property Guru’s (sic) in partnership with Mr U-turn and former Richmastery mentor/blogger/speaker Dean Letfus. (Small world, huh?)]

Anyway — apparently in early September Phil Jones embellished and re-published some of his old Richmastery blog posts lashing out at his critics, his enemies and his former business partners (same thing?) Phil Jones’s dubious epistles from a parallel universe include fantasies about his 2007 copyright dispute with Empower Leaders Publishing and three Empower authors, including me.

It appears information about our copyright lawsuit against Richmastery (and the terms of the out of court settlement) still on the web is causing some reputation issues for Phil Jones and his ‘Presidential Inner Circle’ enterprise in Los Angeles, USA — where he is now living as a tax exile according to newspaper reports.

Apparently our copyright lawsuit is being cited, among other things, as a sort of negative ‘character reference’ for Phil Jones. And he doesn’t like it. I can understand that.

But since he has chosen to again raise these issues in this way NOW, let me say in response that from my point of view, Phil Jones has a history of being less than truthful, despite his claims to ‘value integrity’.

Serious doubts and misgivings have been expressed about Phil Jones and his get-rich-quick business operations by a variety of industry professionals like Real Estate Valuers (Appraisers) through the Property Institute of New Zealand, as well as the Advertising Standards Authority, the Consumer’s Institute, the NZ Qualifications Authority, and the leadership of the Auckland Property Investors Association who declined his membership after he threatened to sue them.

The abrasive Mr Jones has also attracted open scepticism, even scorn from some in the news media (particularly in the business press) since shortly after he commenced business in 2002 with Entrepreneur’s Success Centre, re-named Richmastery, re-named Ralph Trading Ltd (in liquidation). For example, the multiple-media-award-winning publication National Business Review: 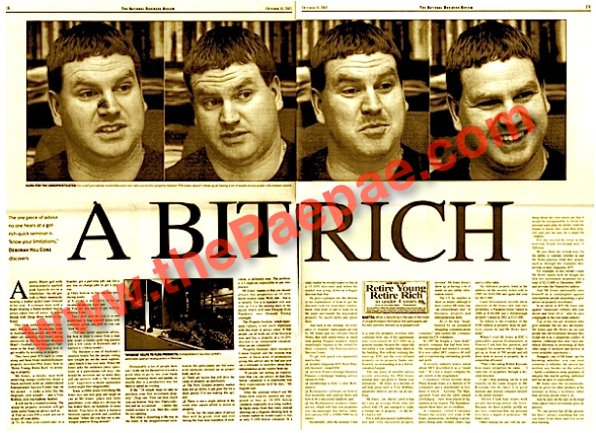 The distrusted Phil Jones — his claims of wealth openly questioned and his business portrayed as a shallow get-rich-quick operation by the media since 2003. (NBR Photo caption - GURU FOR THE UNSOPHISTICATED For a self-proclaimed multimillionaire and very successful property investor Phil Jones doesn't show up as having a lot of wealth on any public information source.) 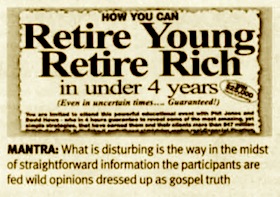 Get-rich-quick in a nutshell — NBR

I say: ‘untrue and misleading’

While our copyright case against Richmastery Ltd, its sole director Phil Jones and his ‘2.I.C’ and Franchise manager John Bedggood was progressing during 2007-2008, Jones issued several imaginatively written articles. They were heavily laced with invective, untrue and misleading statements and character attacks on the Empower Leaders authors Olly Newland, Mark Withers and me in particular which, I hope, few would find convincing. Consider the source.

Using his disreputable Richmastery blog (and now his new website) as a platform, Phil Jones has, in my honest opinion: 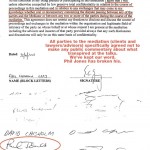 What is Phil Jones's word worth? (click to enlarge) 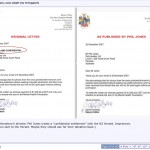 One of the reasons I personally doubt Phil Jones

Phil Jones lost his grip and spat the dummy.

All this appeared to me to be an effort to inflame and personalise the dispute. It was as if Phil Jones set out to create a distraction or smokescreen for his own corporate wrongdoing along the lines of: “Yes, sure, we stole their IP and peddled it as our own. We admit it. Peter caught us, damn him. But those guys taking us to court are just as bad or even worse(!) and they don’t admit it.” (Childish? Yes, I can see why you could think that.)

Phil Jones seemed under considerable emotional and financial stress at the time. From where I sat, he appeared to absolutely hate the new experience of being held to account — and being unsuccessful in his efforts to threaten, intimidate or argue his way out of it.

After the screaming died down and his lawyers finally got through to him about what our evidence clearly demonstrated, we received (as recorded here):
(1) An admission from Richmastery that they’d infringed our authors’ copyright,
(2) A defendants’ undertaking filed in the NZ High Court but applying worldwide promising not to do it again,
(3) Payment of $65,000.

Those are the FACTS — No ‘la-la land’ smokescreen, convoluted denials, attempted re-writing of history, false statements nor character attacks by Mr Phil Jones will change them.

Last word: I’ve pretty much refrained from fresh comment about these matters since our case was settled, regarding them as closed. Unlike Phil Jones, for the most part I remained fairly muted during the lawsuit itself. But if Mr Phil Jones thinks publicly regurgitating his misdirected outrage and venom more than two years later in this fashion to smear me personally (as well as Neil Jenman and other critics) is a way for Jones to ‘Answer Myths’ (!) or try to rehabilitate his reputation and promote his ‘Presidential Inner Circle’ enterprise, I have some sad news for him:

Re-heating cold horseshit and serving it again isn’t going to help you Phil.

Facts are stated to the best of my knowledge (and in this case, recollection). Commentary is my honest opinion. Corrections or clarifications are always welcome by email. Comments are open.

+
UPDATE: The following notice has been added to a page on the Empower Education website which recorded events in the copyright dispute (but had remained static since June 2008).

Richmastery – Copyright infringement and Breaches of the Fair Trading Act

UPDATE: September 2010
This month, more than two years after the out of court settlement detailed below, Philip Ronald Jones (Phil Jones) published a number of untrue and misleading statements about this litigation.

In these statements, Phil Jones attacked the character and motivations of the plaintiffs; he misrepresented aspects of the legal proceedings; he breached a confidentiality agreement relating to pre-trial mediation and misrepresented events at that mediation; he made false claims about the costs of the litigation; and he made several serious and unsubstantiated allegations of supposedly ‘illegal’ actions by the plaintiffs and their lawyers, and [alleged] ‘copyright breaches’ by Empower Leaders Publishing.

His allegations are untrue. If you have any query about any matters connected with this, please contact us through feedback.

Here is a link to a statement by Peter Aranyi in response published on his personal weblog www.thePaepae.com.

Note: The company Richmastery Limited was re-named Ralph Trading Limited on 20 May 2009 immediately prior to being placed in voluntary liquidation on 19 June 2009. Public records available at the Companies Office website (search ‘Ralph Trading’ or Co. # 1207353 in the Companies Register) show that the company and Phil Jones were, at the time of liquidation, defendants in litigation against them by Gilligan Rowe & Associates and Matthew Kevin Gilligan; and that Phil Jones has left NZ and re-located to the United States.
Legal advice to the plaintiffs in the Empower case in 2007-2008 had raised the possibility of these actions (company liquidation and emigration before a court hearing) and this was a real factor in the plaintiffs’ decision to accept the Richmastery/Jones $65,000 offer accompanied by the admissions and High Court-filed defendants’ undertaking detailed below to settle the litigation.

+ UPDATE from Bob Dey Property Report 24 January 2013:
Bankruptcy: Richmastery’s Phil Jones bankrupt
Bankrupt: Phil Jones, Hillsborough
Adjudication date: 24 January 2013
Petitioning creditors: Westpac NZ Ltd & Steve Goodey
Other details: Phil Jones – promoter of property investment through Richmastery, Entrepreneurs Success Centre and later, through his Millionaire Master VIP business in the US – was adjudicated bankrupt on the bank’s application, leaving Mr Goodey’s to be dismissed. Westpac’s counsel, Lina Lim, said the bank doubted the validity, “and in fact the reality”, of a transaction Mr Jones put forward in an attempt to get a brief adjournment. She said an American creditor had also issued enforcement action against Mr Jones & companies related to him in the US. Mr Jones’ counsel, Alex Shinkarenko, told Associate Judge Abbott “the transaction’s taking place on 24 January US time”, but the judge rejected the request for an adjournment because he had no evidence substantiating the transaction. “Mr Shinkarenko, I’ve seen lots of these kinds of proposals. They just vaporise. I’m not prepared to consider a further adjournment,” the judge said. Westpac’s judgment for $800,000 had swelled to $1.2 million, and Mr Goodey got judgment for $396,000 last July in a claim over earnings from the Millionaire Master VIP mentoring programme. Mr Jones promoted property investment during the property boom of the early 2000s through Richmastery Ltd, Blue Peak Ltd & Entrepreneurs Success Centre Ltd. He & his wife Corinna left New Zealand during the property downturn in September 2008 to set up their American business, the Presidential Inner Circle USA LLC – “the world’s intimate & exclusive private club,” according to its website. 11 months later they separated.