« Right/wrong vs Can/should
Another con » 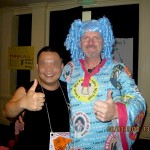 Spruiker Dean Letfus says he has been studying lies.

What I DO find interesting, however, is that the spruiker in question, Dean Letfus, doesn’t actually answer my criticism — of (a) his marketing methods, (b) his hyperbolic claims & promises and (c) his demonstrated track record as a property spruiker/commission agent while promoting himself as an ‘educator’ — in a meaningful way. No. Instead, he chooses the Madoff-esque route of slandering his critic while spouting double-speak to the faithful…

Pursue truth, real truth, knowing you will rarely find it in people who have agendas, are negative or critical, and where their envy is showing.

Oh dear. Speaking personally, I interpret that dodge-the-question-smear-the-messenger behaviour as fitting part of a pattern…

AND he’s claiming new expertise (to add to his property and internet ‘guruships’) … (1) as a student/teacher of America’s founding documents and constitution, and also
(2) how politicians and the media tell lies “with supporting lies”. (He’s worked it out, apparently: ‘I have now studied sufficiently to understand [it] as a “tactic” or “strategy”.’ )

Yesiree, the President of the United States, former US senator and sometime constitutional law professor Barack Obama says religious freedom is enshrined in the US constitution, but property salesman, former print finisher and self-professed internet guru Dean Letfus from Pakuranga dismisses that opinion (and NYC Mayor Michael Bloomberg‘s) as “patent rubbish” (!) — based on WHAT, you ask? Oh, some quotes he probably copied-and-pasted from a religious propaganda website justifying bigotry and second-class status for US citizens of other religions? It’s almost embarrassing.

After overtly damning Obama’s and Bloomberg’s careful, judicious statements about the constitutional protection of religious freedom as “lies”, instant expert Dean Letfus then (if I read him right) takes another swing at lil ol’ me with this brief treatise on news media ethics and “lies” …

It’s a bit like journalists who say things like “Facts are stated to the best of my knowledge” for example”[sic] What they mean is that they have no idea whether what they are saying is true or not so they are qualifying the lie to make it appear more true rather than sticking to facts.

How sad. The full quote from thePaepae.com is this:

Facts are stated to the best of my knowledge and commentary is my honest opinion. Corrections or clarifications are always welcome by email. Comments are open.

That’s not ‘qualifying the lie’ as Dean Letfus suggests. Not at all. I stand by what I write here. And I’m also allowing for the possibility there may be things I don’t know which may be material to the discussion. Or that perhaps I may have misunderstood something — and genuinely inviting feedback. For the newfound expert on lying to portray that as indicating “no idea whether what they are saying is true or not” misses the point in my view and — true to form — is an attempted smear rather than an answer. Ho hum. (That’s if I read him right. That wording he quoted may just be a coincidence…)

Which ARE the specific statements/facts he implies are ‘lies’ or ‘half-truths’?
No answer so far.
Don’t expect one, it seems easier for operators like Dean Letfus to continue to avoid the truth, while spouting about their religion as they crash from U-turn to U-turn.

When I get a chance, I’ll pull together another bunch of Dean Letfus’s marketing statements and compare them with reality. Let’s see how they go through the BS filter. Here’s one to start:

Scrolling headline: “FLASHNEWS:[sic] ‘Dean Letfus is an educator, [sic] He does not sell property, Provide property or Find property”

“Now, in case you’re wondering, I am not the type of property educator who sells property, finds deals for you to invest in or earns commissions from your success. In fact, I guarantee that when you come along to my event I will not try to sell you any property.”

Compare that with this public appeal, from a few days ago… 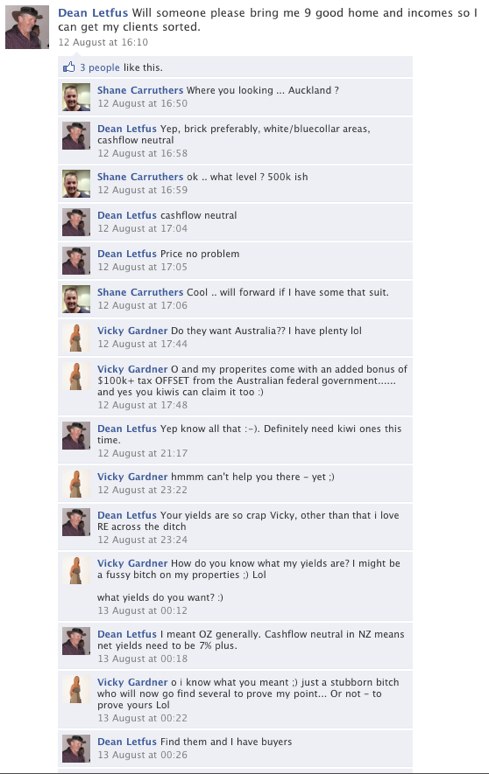 Uh, OK… From “Dean Letfus is an educator, [sic] He does not sell property, Provide property or Find property” and “I am not the type of property educator who sells property, finds deals for you to invest in…”  to advertising for property finders to send him real estate deals: “home-and-income … to get my clients sorted … in Auckland … brick preferably, white/blue collar areas … price no problem” … riiight.

What’s that saying about leopards and spots? Oh yes, I remember.

Until then, cheers – P