« What ‘letting it slide’ can cost you
Keeping things in perspective »

No hard feelings – present some facts 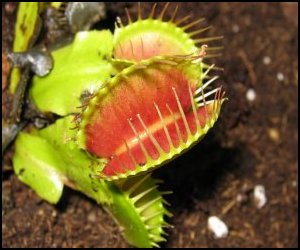 I know the spruikers I take aim at here now and then feel hard done by. So do some of their fans.

I’m sorry for their hurt feelings. I really am. But the way I see it, they make their own bed and lie in it (— or lie from it, one could say). Actions have consequences.

Some of those mentioned have made their feelings known privately and publicly, and their outrage about the outrage (to quote Lewis Black) and intimidatory behaviour and threats have seen some censorship and retraction lately. (Not here.)

Bullyboys will give it a try whenever they sense weakness — remember the Marshmallow Theory?

Sometimes, as we have discussed before, the targets of criticism will, instead of considering whether there’s any legitimacy to the points being made, or raising a fair and reasoned argument, simply try to thump or abuse their critics. Sometimes they, or their anonymous glovepuppets or secret alter-egos will merely make false allegations in an attempt to smear the critic. That happens a lot.

To demonstrate what I mean, here’s a recent example from the comment thread at interest.co.nz. (It followed Managing editor Bernard Hickey quoting from this post on ThePaepae.com which responded to comments prompted by Gareth Kiernan’s article.)

by Anonymous – 30 May 10, 3:27am
it’s interesting to see Peter Aranyi commenting on this blog (and in numerous of his own posts) about Dean being a “spruker” when his Empower Education business does exactly the same thing? now am i [sic] the only one to think that hypercritical? [sic] The only difference between Dean and Peter is that Dean can actually get people to his event and Peter couldn’t event [sic] get his own mum to come list [sic] to his event..

Charming, don’t you think? These poorly drafted and factually incorrect comments — anonymous, naturally, and posted at 3.27 am! — popped up as a Google alert a day or so later… so I replied thus — in my own name:

What a novelty: an anonymous commenter accusing me of being a bad ‘hypercritical’ person.

Anonymous 3.27am, your tired old ‘Peter’s just the same as those he criticises’ schtick doesn’t cut it, I’m sorry to tell you. Empower Education doesn’t sell property — unlike your hero, property spruiker (note spelling) Dean Letfus.

I’d be curious to see any evidence or justification for your comment that EE does ‘exactly the same thing’. Your claim is nonsense.

Here are just three easy to find examples of offers Dean Letfus made to his ‘students’ (source: his website):

Hi there.
I promised you one final chance to get in on this Fiji development. Well here is the info.
….
These sites are available for $95,000 NZD as full payment in advance. As previously stated you have my personal money back guarantee that you will receive freehold title of a section. They are all back sites with good elevation which is good from a breeze and view perspective and safer in the event of a hurricane. If you look on the scheme plan the lots are around 817 through to 822 more or less.

To give you an idea of the value of these sites Momi Bay next door is now selling sections in it’s subdivision which is behind the golf course. The cheapest sites are $270,000. They have no view at all and are a long long way from the water. Sites with views are selling for 500 to 700K and none of them have marina berths.

Does all this sound a bit too good to be true?? Well it is not unusual for developers to offer presales at discounted rates to get s/divisions out of the ground. The level of discount reflects the fact that the funds are being disbursed directly to the developers so potentially your funds are unsecured until title. I am sufficiently confident in the development having met with the developers on site and completing extensive due diligemce [sic] in Fiji that I am will ing to remove that risk for you by guaranteeing your funds until title.

There is VERY significant profit in these sites as soon as title is issued or close. My onselling of some now enables me to continue my work with the poor in Fiji and allows you to purchase a significant investment for much less than it’s true value. There are only a small number of sites left so please contact me promptly if you wish to pursue this offer. CONTACT ME

Oh, dear. That didn’t work out so well. I wonder how the personal guarantees are working out?

Sponge Bay:
Last month we sold out the new Sponge Bay development and as expected, a few deals didn’t finalize. I found managing a waiting list to be rather difficult whilst in Fiji so this is to advise you that there are a few lots available still. Please go here, choose an available lot and follow the instructions. Strictly on a first in first served basis!! Don’t forget to read the market update at the bottom of the link page!!

Thank you to the many people who always ask about our work in Fiji. On our recent trip we met with the architect who is designing the new building to replace the burned down one. That is progressing well. We also noted an enormous increase in poverty, (up from 32% to 50% in 7 months), so our work there will become even more critical now. Your interest in and ongoing support of our work there blows us away, thank you all again.
… Stay safe ~ Dean, Raewyn and the Massive Action team.

According to the Gisborne Herald, the Sponge Bay subdivision didn’t work out so well:

“Mr Lane is also project-managing the sale of 10 sites in the Sponge Bay development.
It is in Wainui Road by the Sponge Bay turn-off and many of the lots are still on the market. They initially all sold before the market crashed and buyers were unable to settle.
Land owners Trevor Burrows and Matthew Gilligan then asked Total Property Strategies NZ Ltd to market 10 lots.
A price correction on the sites, with some now starting at $99,000, …”
http://www.gisborneherald.co.nz/article/print.aspx?id=15798

Storage Zone is the first strata titled storage facility in the country. You can owner occupy or keep as an investment. Usually these storage units are owned as one lot and you can only rent them. This one you can own and use or rent to the public!!
There is only 1 other storage facility in the area and that is 100% occupied,… you cannot get in.
So Storage Zone is likely to enjoy similar occupancy, and with owner occupier options there will only be some available for rental at all.
I’ve checked out the developer, he is a long term serious player who builds excellent quality.

I’m buying some and I recommend it to you!!

Read the brochure below and then contact me to reserve a lot. Then do your due diligence, talk directly to the developer etc. and decide if you want to go ahead. No pressure but reserve a lot No now so you don’t miss out.

Oh I nearly forgot, I have managed to negotiate this as a 100% NO MONEY DOWN DEAL for you as well. Deposit bond the deposit, (you’ll need maybe 20 grand equity in a property somewhere and it can be above 80% LVR) and Massive Action and the developer will pick up the tab on the fee.

Oh and did I mention that as you are buying off the plans so you also have plenty of time before settlement ( and hopefully some rental and capital growth :-)).
This opportunity couldn’t get much better 🙂

This development was apparently shelved due to the market collapse/tightening finance.

These are just three examples of Dean Letfus acting as a property spruiker.

Anon 3.27am, I invite you to find anything remotely resembling this behaviour from Empower Education. You can’t. We don’t do it.

Look, we ALL get defensive under fire — me included. I think that’s just human nature. (One could describe my reply to Anonymous 3.27am as defensive. Fair enough.)

But if we can — and I really try to do this — it’s important to try to get to grips with what’s actually being said or alleged about you or your behaviour, statements or actions, and consider it as feedback. (And valuable as such.) Marshal some facts and present an argument, I say.

A couple of spruikers who are now working together have separately claimed Tall Poppy status recently (i.e. ‘I’m only being criticised because I’m an achiever!’) in response to some examination of their behaviour — but the claim is vacuous, in my opinion. This headline, written about Blue Chip’s Mark Bryers and mentioning Hanover’s Mark Hotchin applies to them equally, in my view: 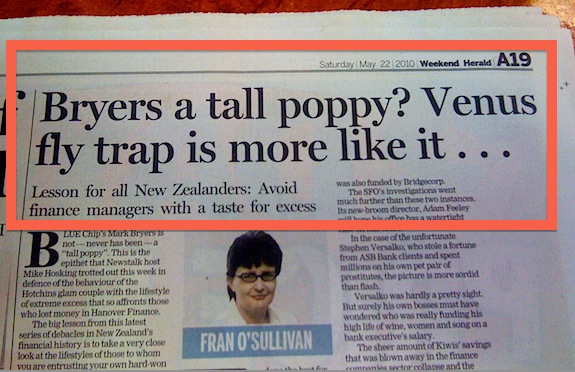 Fran O'Sullivan calls it on the deceitful and self-serving description of predatory spruikers as 'tall poppies'.

To the investors who lost large in Blue Chip by following the Bryers’ brand of commercial magic, he is more like a carnivorous plant: the kind that attracts and digests its prey. — Fran O’Sullivan in the NZ Herald