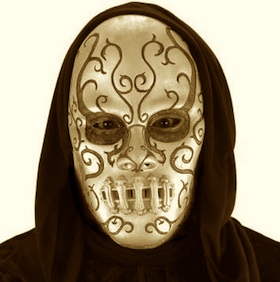 A while ago I posted a few thoughts: Potshots from behind a mask of anonymity are, by definition, cheap, saying in part…

I’m all for well-expressed (even strident!) comments, discussion, argument and debate. I much prefer it to be in the critic’s own name (accountability) but sometimes anonymous can be OK.

The recent case of a British history professor and author, Orlando Figes, anonymously trashing his “rival’s” books and then DENYING it was him doing it when caught and confronted — lying, then threatening to sue his targets/unmaskers for libel (?!?!) — opens up a different conversation.

The aftermath to these events is this unseemly spectacle:

One of Britain’s leading historians, Orlando Figes, is to pay damages and costs to two rivals who launched a libel case after a row erupted over fake reviews [he] posted on the Amazon website.

(Hello “Slapper“? Hello “MUFFIT“? Is there anything you need to confess?)

Here’s a good background article ‘How I rumbled the lying professor’ from one of Prof. Figes’ targets. A low tale indeed.
—

I maintain there is a way to criticise people and their arguments: cleanly and directly. It’s what I try to do. Truly. (Do I fail? Yes, sometimes I fail.) Here’s an example of how it’s done … where Columbia Historian Alan Brinkley took issue with Seymour Hersh’s book on JFK The Dark Side of Camelot: 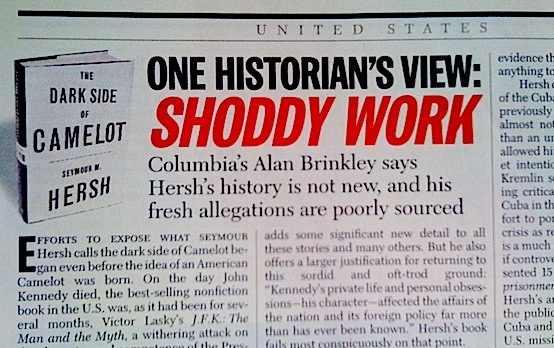 How to criticise — in your own name, openly.

Pretty tough, but that’s how to do it: openly, with your name and affiliation top and bottom. Lay out your argument and ‘go for it’. Some of what Brinkley said about Pulitzer Prize-winner Hersh’s research, his reported manner when interviewing sources and how he expressed his conclusions must have been galling for Hersh to read, but I’m sure he answered as best he could. Most importantly, he knew where the ‘fire’ was coming from and thus could respond.

I rate Seymour Hersh, by the way. He’s a legend and a hero of mine in the same vein as another investigative journalist John Pilger. Remember his work exposing the My Lai massacre and Abu Graib. Is he perfect? No, but he’s insightful, a committed professional muckraker (“uncovering dirt is the job that made Hersh’s name” – TIME Magazine) and by god he’s courageous.)

Given my own journalistic background and sensibilities I sometimes try to shine a light on misdeeds — and always to provide hard evidence for my analysis and assertions. I try to focus on documentation, quoting on-the-record statements, citing provable actions and outcomes. (Yeah, OK, describing spruiker Dean Letfus as ‘rootless and slippery’ is a harsh judgement, I grant you, but I’ve given that guy plenty of rope. It’s also my honest impression based on observation of his words and actions — and, vitally, their consequences.)

It’s pretty hard to argue with facts and someone plumbing your clearly demonstrable track record. (Walks like duck, talks like a duck … etc.)

Still, as the Orlando Figes example shows, some weaklings and liars revert to bluster, threats and slander or try smear campaigns as ‘the best defence’, muddying the waters by invoking implausible claims of persecution and ‘tall poppies’. (Please.)

Look how that worked out for Professor Figes.