Making a pig of it. Jordan Williams has been tardy with his financial reporting obligations 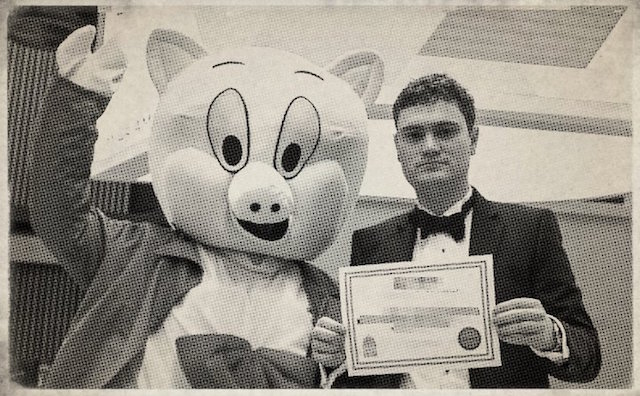 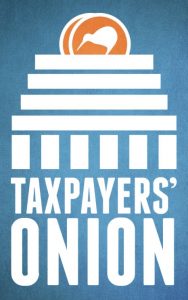 It appears the PR attack machine operated by New Zealand’s most defamed man Jordan Williams (the value of whose reputation has been under review) and his ‘co-founder’, long time National Party political activist David Farrar, has been delinquent in its financial reporting obligations since the end of January this year.

The ‘NZ Taxpayers Union Inc’ incorporated society has failed to file up-to-date financial reports at the Incorporated Societies office, as it is required to, and (as I write this) it has failed to rectify the breach despite it being drawn to its attention.

Some might see that as ironic, given the PR attack machine’s loud focus on holding other, actual real public bodies ‘to account’ in the name of ‘transparency’. (vomit)

Now, one presumes there are all sorts of advantages to be gained by operating in this manner, as an incorporated society – not least that organisers can send out press releases claiming their lobby group/proxy service/PR attack machine is a (cough) ‘grass-roots’ group of Kiwis who care deeply about … yada yada.

But one of the downsides is an obligation to file annual accounts which are made public by the Incorporated Societies office and published on its website: www.societies.govt.nz (part of the Companies office.

The office says filing these reports is ‘important’ … see Why should you file financial statements?:

‘Important’ and ‘reporting obligations’ sound like, you know, an OBLIGATION, right?

And there’s a deadline to comply… see: When do you need to file financial statements? 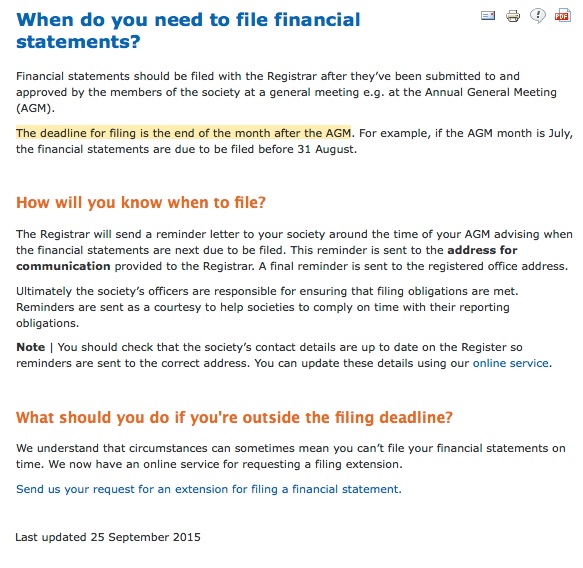 Deadline — the end of the month after the AGM. Got it.

OK, so when was the last AGM for the PR attack machine? Oh look:

Notice that:  The AGM for the 2016 year was on 14 December 2017. To me that seems quite late to hold an AGM for the previous year. But I guess it was a big year with all the defamation litigation, appeals etc., and ghostwritten blog posts for Cameron Slater to do. Oh and all that anti-sugar tax stuff for Carrick Graham’s clients etc. (I’m speculating here — but hey, that’s how some of their stuff reads, man.)

But all good. According to that filing on www.societies.govt.nz reproduced just above, someone calling himself ‘Jordan Williams (Executive Director)’ uploaded a ‘Financial Statement File’ at 3.48pm on Monday 15 January. (I had few days at the beach at that point, I think. Maybe he did too?)

Anyway, looks like he filed it well within time — but what’s this? Oh noes!

By some unfortunate error, ‘Jordan Williams (Executive Director)’ apparently uploaded the previous year’s financial report. (I know this because I can read.) 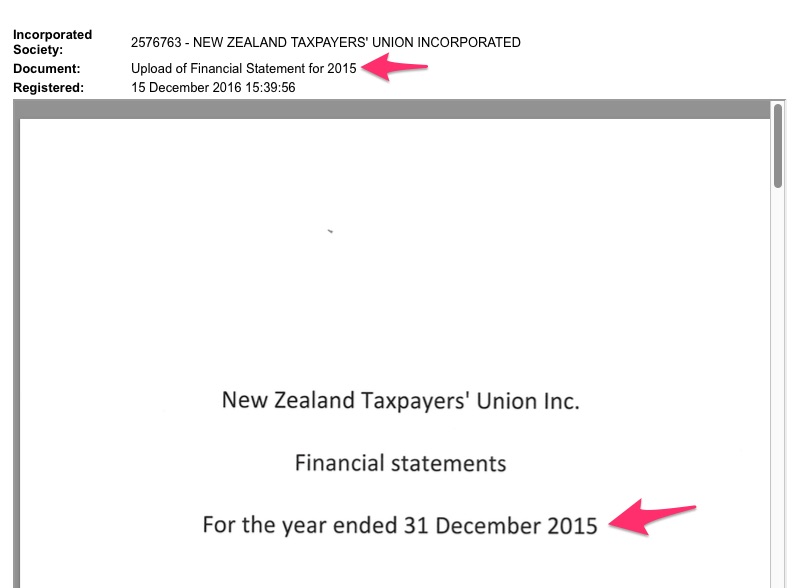 And, oops! Oh dear me, how ever did this happen? Here’s, supposedly, the Financial Statement for 2016, filed 15 January 2018, but OMG it’s actually the same report as the previous filing: the 2015 year.
How unfortunate. 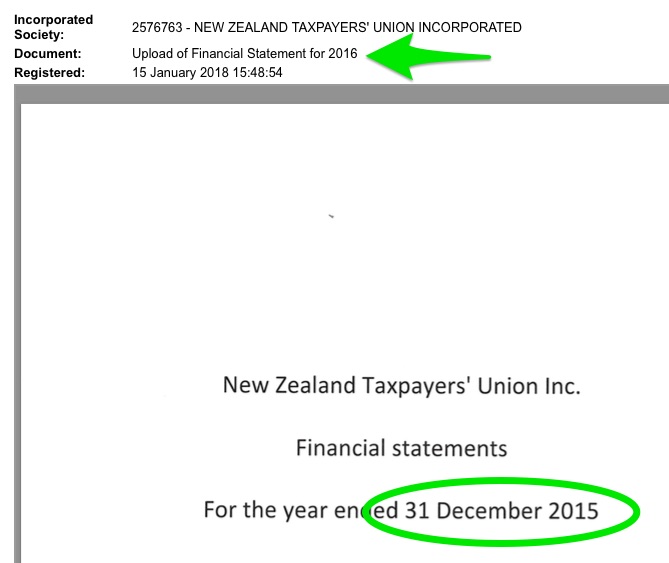 If you take a look at the filed documents list, and you’ll see the two files are identical:

Ruh-roh. Both 384.6 Kb – yep, the same paperwork. A sad case of ‘finger trouble’ at PR Attack Machine Towers? Could be.

But that’s the funny thing. Despite being told by someone (Not me. I am a persona non grata,  apparently) and, apparently being officially informed by the optimistically-named ‘Compliance Team’ at the Incorporated Societies office, it still hasn’t been fixed.

Two months after the incorrect report (the previous year’s Financial statements) was publicly filed, that’s still the case. It’s still wrong. The ‘society’ is still not complying. How must those original 15 people who set up the society be feeling about this state of affairs? Pretty shook, I’d say, and rightfully so.

As we’ve seen, one of the legal requirements of maintaining an incorporated society is that annual financial reports are publicly filed. By the end of the month following the society’s AGM. But it’s not a happening thing.

In the gap, we can only speculate. But I think we’re entitled to, don’t you? Yes, so do I.

There’s no public reporting obligation to reveal the names of the ‘donors’ so that category is quite opaque. Which is convenient, huh?

But their identity is not a complete mystery. For instance, there’s a guy with a somewhat chequered history (he would admit that)  called Damien Grant who recently proudly declared on Twitter that he funds the PR attack machine to the tune of $100 per month. 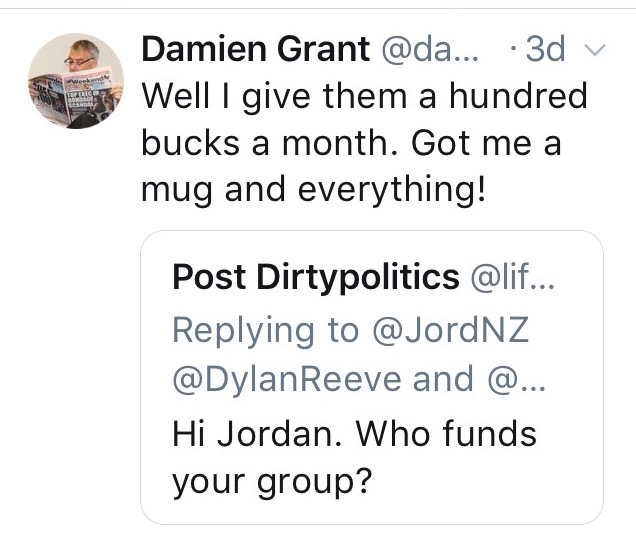 A mug! For a mug. You’re known by your friends, eh Damien?

A few more zealots like Damien and you’ll soon pay for the photocopier lease, the aquarium in reception, and 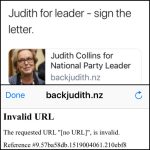 But aside from such semi-public declarations, there’s apparently a well-established reluctance by ‘the society’ to disclose the identity of those bankrolling the NZ Taxpayers Union Inc. That’s a sitution that leads to feedback like this (below), given directly to Jordan Williams, this week – again on Twitter. (And until you’d read this, you might have thought I was a bit harsh in my judgement of the PR attack machine): 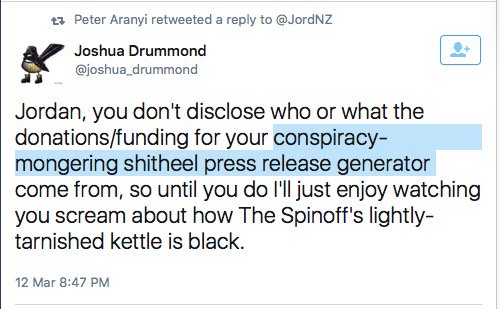 The context of that comment was Jordan Williams hassling new media start up The Spinoff (Joshua is part of the wider team, I gather) with, let’s call it his criticism of a recently-announced content sharing arrangement with Radio NZ.

To be clear: Jordan Williams does not like The Spinoff. Brittle at the best of times, Williams displays deep, deep grievances with The Spinoff. Remember this? This was nothing. (On the plus side, it’s nice to know I’m not the only personae non grata. Yay! Me and Duncan.) 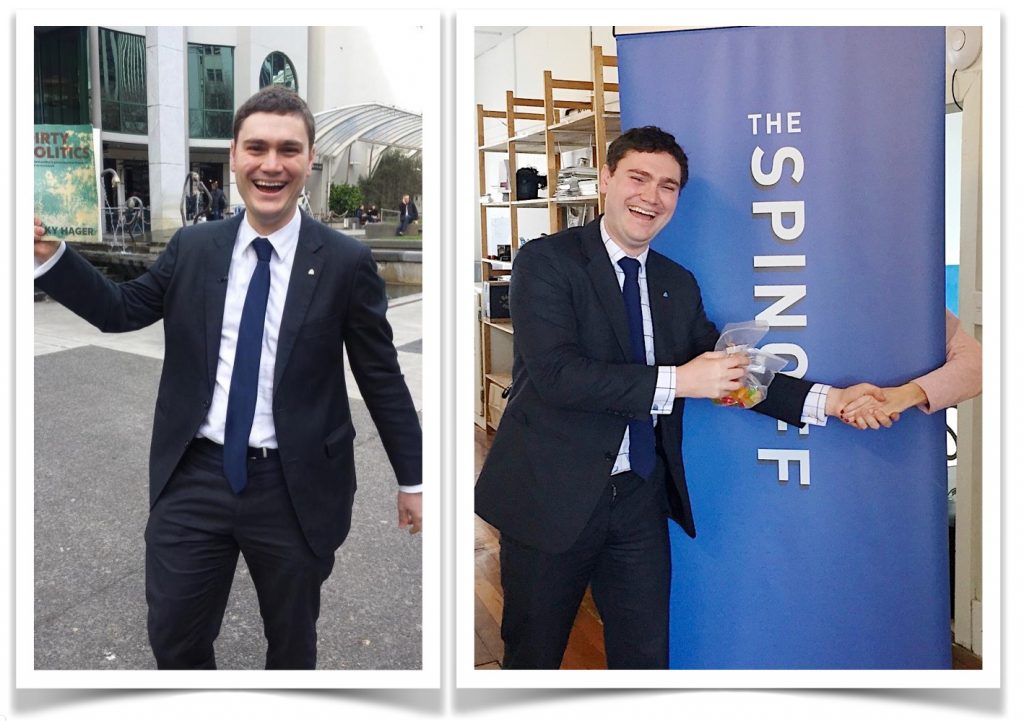 Anyway, a member of the toothless ‘Compliance Team’ at the Incorporated Societies office advises that the team has apparently “been in contact with the organisation and will be closely monitoring the matter.” But for whatever reason, they (the toothless Compliance Team) are unwilling/unable to say anything more about the matter, nor give any predicted timelines. OK.

I’m aware that there have been a number of steps taken by the ‘NZ Taxpayers Union Inc’ PR attack machine to move towards a new corporate vehicle.

Someone calling himself ‘Jordan Williams, Executive Director of the Taxpayers Union’ apparently met with a solicitor in January 2017 seeking advice about how to establish a limited liability entity using a new Company Constitution and a Trust Deed for the ‘Taxpayers Union’ which had just been drafted. Has anyone else heard about developments in this area? If so, let me know, please. I’d ask myself, but, you know, *mutters* persona non grata. (It’s all some innocent misunderstanding, I’m sure.)

In the meantime, Jordan Williams and his hirsute assistant Louis Houlbrooke (freshly released from press secretary duties by the Lone Ranger, oops, I mean ACT MP David Seymour) apparently have got time to waste – other people’s time, I mean — carrying out attack PR stunts supervised by (I’m pretty sure) co-founder David Farrar dressed in a pig suit. 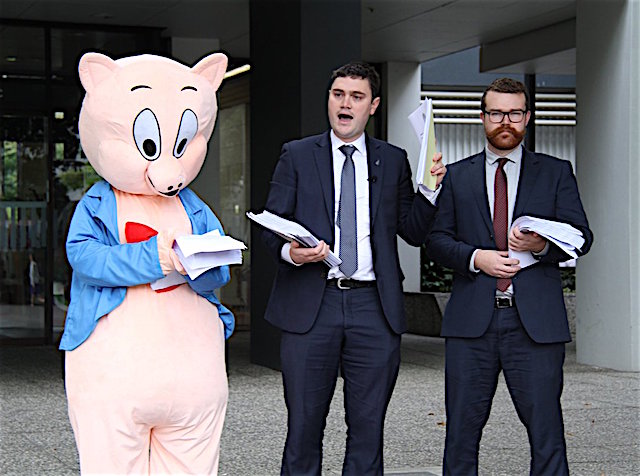 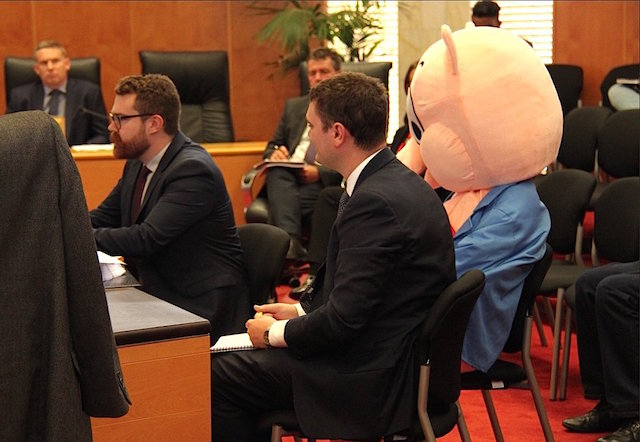 “Maybe instead of wasting its time with pointless meetings, Jordan Williams COULD ASK THE PIG to file the ‘NZ Taxpayers Union Inc’ PR attack machine’s CORRECT annual financial report at societies.govt.nz? Then the Onion would actually be *complying with the law*. Just a thought.” – Peter Aranyi @onThePaepae 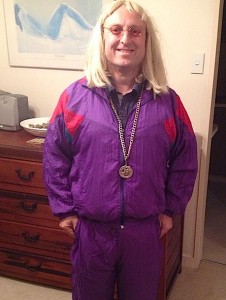 David Farrar’s love of dressing up in costumes is of course well-known from his early days involved in Young Nationals, beginning in 1986 he says.

And here’s another, more light-hearted pic of David Farrar playing dress-ups — from a function that looks like rehearsals for skits night at a Young National Party camp. (I bet they let their hair down at those, right?) 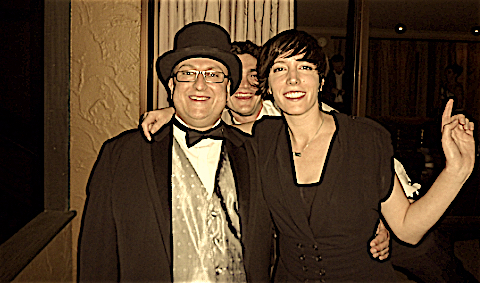 It’s notable that Jenna Raeburn has gone on to a full-time career as a performance artist, playing the part of a political/government relations consultant whose business (wait for it) only operates when right wing governments are in power. It’s absolutely brilliant satire — guerrilla theatre which has actually been taken at face value (lol. I know, right?) by a number of ‘serious’ media outlets, notably Newshub. Priceless. 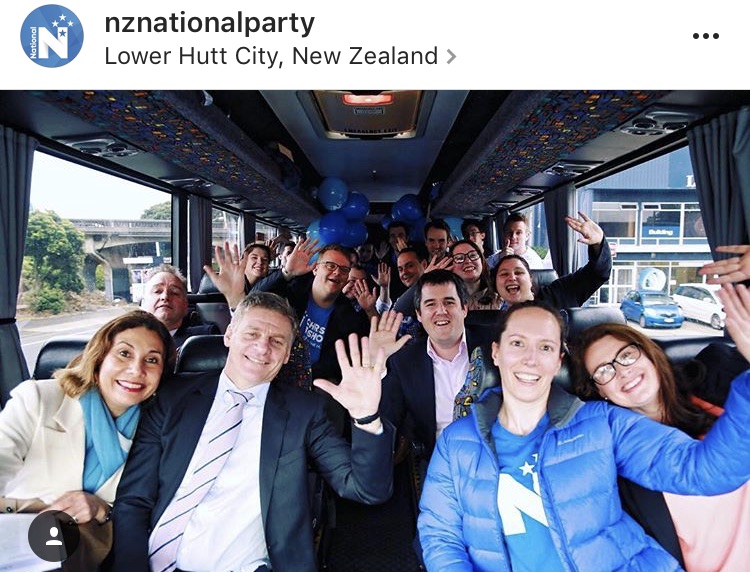 (You know, on reflection, maybe I’m only 65%-70% sure about that being David Farrar in the pig suit.)

PS Here’s the Court of Appeal decision declining Jordan Williams’ appeal against the setting aside of the historic (but not in a good way) defamation damages awarded by a punch-drunk jury in the Williams vs Colin Craig lawsuit. See: NZCA-Wiilliams-v-Craig-(re-issued-8-March-2018).pdf

Updated to mention the 2017 financial accounts and election year; and to remove the terminal ‘e’ from ‘performance artiste’ in my description of Jenna Raeburn’s new gig. Like many other disappointed National Party campaign workers, that tortured soul has enough to deal with in Opposition, without my thoughtless, inadvertent sexism. (Although Barbara Ewing told Wallace Chapman on Radio NZ recently that she still prefers to be called an ‘actress’. So horses for courses, I guess. Sorry Jenna.)