« Are you dating a tyrant? Take our simple quiz to find out!
John Key’s changing narrative on al-Qaeda threat in NZ » 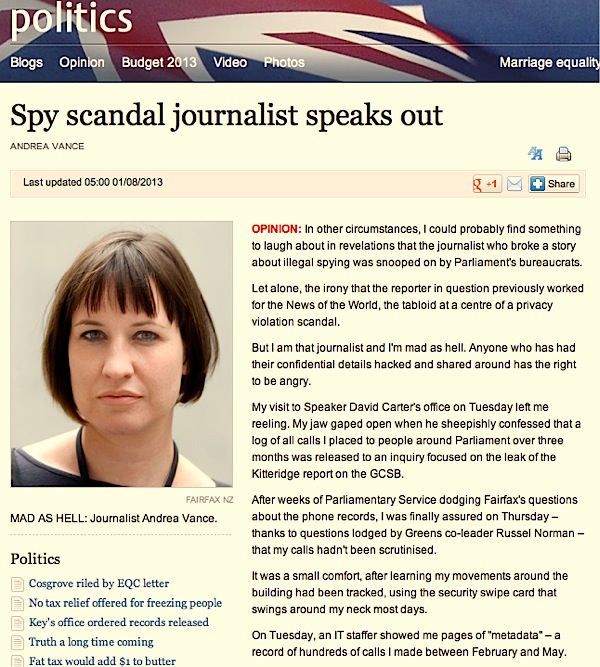 Maybe I’m ‘conflicted’, since I’ve worked in the press gallery — back when it was where it should be: in the corridor on the 2nd floor of Parliament Buildings, a short stroll from the actual Parliamentary Press Gallery. I’ve used the swipe-cards, used the Parliamentary Service-provided phone extensions (paid for by my employer at the time, Radio New Zealand).

It nauseates me to discover that far from protecting the fourth estate’s role and right to do its job at the seat of our democracy, Parliamentary Service, under pressure from the Prime Minister’s Office and his “enforcer” Wayne Eagleson, rolled over and surrendered surveillance data on a press gallery journalist to the David Henry witch-hunt set up on Mr Key’s orders.

The claim that this was ‘inadvertent’, etc. seems unprovable to me. The actions were taken, and to me that speaks of a climate of intimidation, power and arrogance which rivals the days of Muldoon. (Does anyone still credibly question the validity of Russel Norman’s comparison?)

I’m glad Ms Vance refers to the Prime Minister instigating Police raids on news media offices over the teapot tapes. I was aghast at the police’s actions on Mr Key’s behalf, acting as they did to suppress the news media on the eve of a general election. (see: A shot across the news media’s bows re cup of tea tape and Is NZ’s international reputation as a democracy taking a pasting?)

I remain enormously impressed with John Key as a communicator — as a salesman for the government and, in the right circumstances, for the country. But Mr Key’s inexperience as a Parliamentarian, his administration’s deployment of deal-making ‘business ethics’ and short-cuts like the SkyCity ‘tender process’, and his National-led government’s at-times cavalier attitude towards due process and democratic conventions are not a new phenomenon. And they trouble me.

Any journalist will take Mr Key’s statements about ‘valuing’ the role of the fourth estate with a sack of salt. His, and his enforcer’s actions, as well as the supine responses of those whose ‘co-operation’ they sought, speak much louder than any glib assurances.

I second Andrea Vance’s outrage, and her conclusion: It seems plain John Key’s administration holds the news media in contempt.