Is NZ’s international reputation as a democracy taking a pasting?

I started to reply to a comment by Craig, who suggested that if Bradley Ambrose is successful in his call for the High Court to declare the ‘cup of tea’ conversation “not a private communication” that that (in Craig’s view) would be “a sad day for privacy in this country”

Oh yes? I thought. What about Democracy in this country, Craig? Or Law? … as noted yesterday in Bradley Ambrose takes the initiative:

I welcome the involvement of the courts in this fiasco

I personally think the country’s international reputation has been damaged by actions involving the police in media suppression just before a general election.

Following his complaint, apparently laid when he summoned police officers to his Beehive office (does that make it at his orders?) the police at first took the extremely unusual step (*never* in my experience) of ringing around news media organizations and overtly ‘warning’ them of the consequences of letting details of the conversation slip out — specifically pointing to big fines and jail time.

Threats? That kinda sounds like something more at home in post-coup Fiji. Or the Kingdom of Tonga.
You think I’m kidding?… 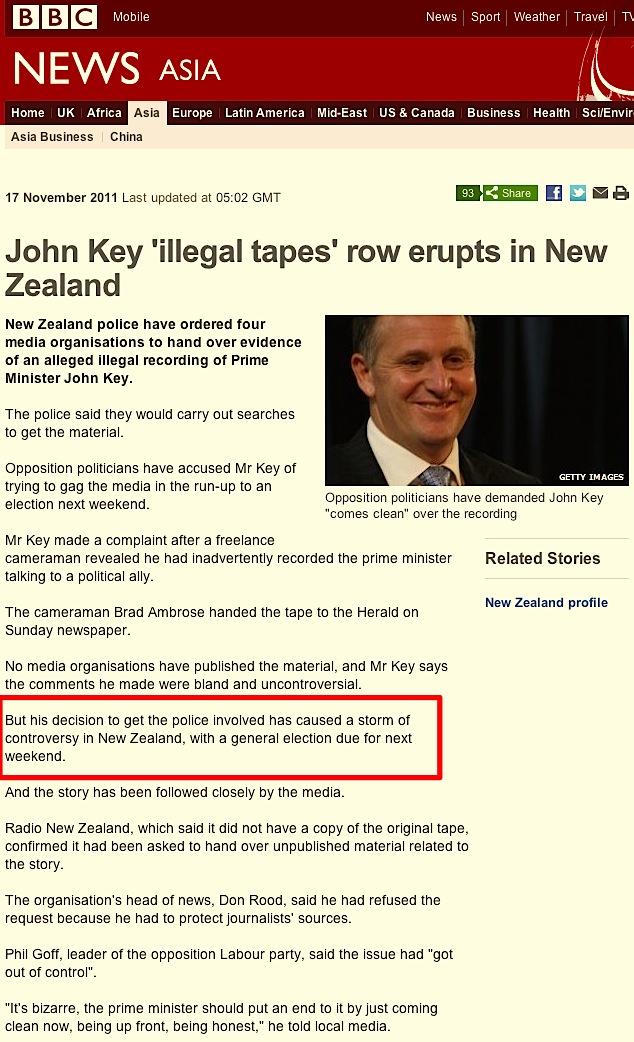 Shame. We’re used to seeing media-suppression stories like that about, well, about other countries.

Now, in what risks being seen as police-acting-as-proxy-for-the-PMO’s efforts to suppress the recording (as the BBC story demonstrates), police investigators are literally serving search warrants on news media offices … in the lead-up to an election!

Shades of Mugabe? Or am I drawing too long a bow? Really?

At least the High Court will consider the law, and (who knows?) perhaps at another time, the police actions, as they did with the Urewera 18 — gee, how did that end up again?