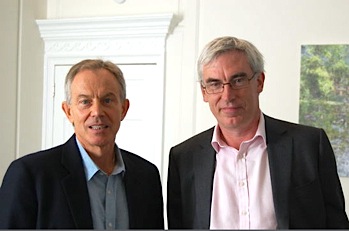 I listened to this interview twice last night (as a podcast).

I was impressed with Blair and his argument, I have to say. I always thought he was a great communicator, but didn’t expect to be struck, even inspired by his reasoned resoluteness and his thoughts about the challenge of radical Islam and Iran’s nuclear ambitions … and his self-doubt/questioning his own decisions and positions.

It was also interesting to hear him say ‘I remain basically a public service guy’ and indicate he would go back into it, given the chance (European Parliament etc.)

Listen here at the BBC:

Owen Bennett-Jones says Blair’s book is ‘suffused with disdain for the media …’ and the conversation takes an interesting twist (about 22 mins in), with Blair describing the ‘rancorous’ relationship the 24/7 media machine has developed with politicians.