Misunderestimating* a player’s willingness to ‘burn the rules’

Reading a quite good column from Marco Arment about the Google Reader shut down, emerging competition and ‘free’ services (he’d earlier said, and I agreed: “It may suck in the interim before great alternatives [to Reader] mature and become widely supported, but in the long run, trust me: this is excellent news.”) I came across this section (bolded) which echoes a conclusion I reached about business a few years back. 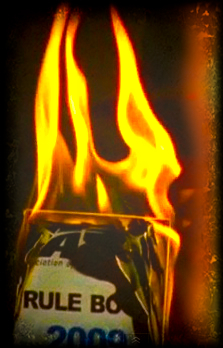 Our industry is prone to many common failures of unregulated capitalism, with the added instability of extremely low barriers to entry and near-zero cost per user in many cases.
If you try to play by the traditional rules and regulations, you run the risk of getting steamrolled by someone who’s perfectly willing to ignore them. Usually, that’s the biggest potential failure of the tech world’s crazy economy, which sucks for you but doesn’t matter much to everyone else. But sometimes, just like unregulated capitalism, it fails in ways that suck for everyone.

I run a training business which formed alliances with some top experts in their fields — people who had earned the right, by stint of their long track records, to be considered ‘qualified’ to teach others about the steps to success.

It was striking then, to see a couple of my clients, people who’d come to learn at the feet of the ‘gurus’ during training events I’d set up, launch their own copycat versions of those events … with themselves as ‘gurus’.

I call them copycats because that’s what they were. Shamelessly. e.g. I ran a course called ‘Property Investor’s School’ (which they attended) and they launched a weekend ‘Property University’ — before being advised by the NZ Qualifications Authority that ‘university’ is a protected term … and switching to ‘Property Academy’.

Where they surprised me (and it’s a long tale) wasn’t in their mimicry, imitation and copyright infringement, although that was striking, but in their apparent dishonest willingness to just make stuff up about their own experience and expertise as ‘gurus’.

All those odious plagiarizing roosters did was (1) loudly, hyperbolically proclaim they were experts (2) spend a lot of money on advertising making those same brazen claims and exaggerated promises to ‘get rich quick’, and (3) fend off the odd setback like Advertising Standards Authority warnings, etc …and Bob’s your uncle.

So Marco’s “you run the risk of getting steamrolled by someone who’s perfectly willing to ignore the rules” rings true.

Sadly, a generation of spruikers and con-artists sucked a lot of money out of the marketplace during the last boom … before some of them were bankrupted and/or ran overseas. Others seem to be coming around for a second bite of the cherry, notwithstanding warnings from the regulatory authorities.

Still, you decide how you want to live your life, and by what standards.