« Julian Assange on 60 Minutes
Anyone could be a critic … » 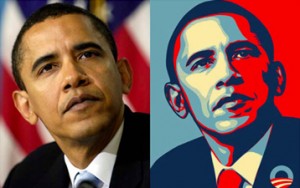 I hadn’t seen that The Associated Press and Shepard Fairey had sort of settled their dispute over Fairey’s unauthorised and lied-about use of AP photographer Mannie Garcia’s pic of Obama in the famous and ubiquitous HOPE poster … which we discussed here and here. (Read AP media release here.)

The lawsuit (which was enriching no-one but the lawyers!) was settled ‘on amicable terms’ earlier this year, according to some reports. (Read this story with the lead buried in the last line in this report from PDN online):

In reaching their settlement, both sides stuck to their legal positions, and issued face-saving statements. AP president and CEO Tom Curley said, “AP will continue to vigilantly protect its copyrighted photographs against wholesale copying and commercialization where there is no legitimate basis for asserting fair use.”

For his part, Fairey said, “I respect the work of photographers, as well as recognize the need to preserve opportunities for other artists to make fair use of photographic images.”

He added, “I look forward to working with photos provided by the AP’s talented photographers.” And, the AP press release notes, he has agreed not to use another AP photo in his work without permission.

Today’s news is that AP is now suing more US clothing manufacturers, including Urban Outfitters Inc., Nordstrom Inc. and Zumiez Inc. … adding to its suit against Obey Clothing …

….accusing them of selling T-shirts [nationwide] that violate the news agency’s copyright of a photograph of Barack Obama that an artist’s “HOPE” image was based on. 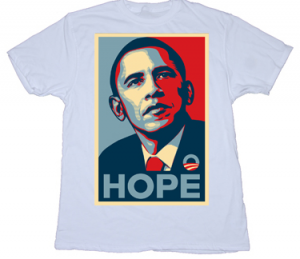 Fair enough. Those firms (presumably) made money from a commercial venture exploiting a creative work for which they paid nothing(?) … pretty tough to make a case for ‘fair use’, it seems to me. And karma for Fairey.

Is admission of guilt important? It depends.

A copyright infringement lawsuit some of my authors and I took against a gang of multiple plagiarists a few years ago was also settled out of court — but not really ‘on amicable terms’. Indeed, the copyright infringer’s yelps of outrage (at being caught and held to account) continue to echo around the internet.

Richmastery’s public admission of wrongdoing — theft of our intellectual property — was part of the settlement. Unlike the evidence-falsifying plagiarist* Shepard Fairey. Still, AP is clearly ‘following the money’ … taking Deep Throat’s advice from All The President’s Men. Smart move.
-P
* Yeah, I think AP had it right about Shepard Fairey. Fair use? Nope. Not without attribution or acknowledgement. Fail.