« Understatement of the week
Another unflattering profile of propagandist Roger Ailes »

I stumbled across a statement ex-Richmastery franchisee Steve Goodey posted on the PropertyTalk discussion forum last week claiming that he’d been a ‘full-time property investor for 15 years’ — which made my ears prick up. Eh? I thought. 15 years? That doesn’t sound right. 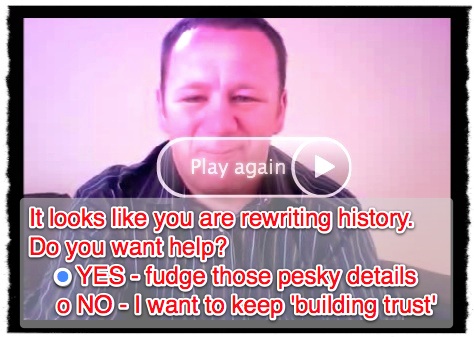 Property spruiker Steven Goodey presents himself as 'a full-time property investor for 15 years' but HIS OWN earlier claims seem to challenge that statement. What are we to believe? (Apologies to Rachel Maddow)

I bought my first property just on 4 years ago now while my wife and I where [sic] still flatting in Wellington.

Side note: This tale, Steve Goodey My Story is also notable for what appears to be Steven’s public confession that he submitted a misleading mortgage application to his bank to buy this ‘first property’. He says he’d signed an agreement to buy ‘your average 3 bedroom ex state up and down flat’ from a mate for $85,000 …

… I changed the contract for sale and purchase to read that I would pay $95,000 for the property, and then wrote a side agreement with my mate the vendor saying that if I settled on time on settlement day I would get a $10,000 discount.
So off to the bank I go and ask for a 90% loan on the value of $95,000 the bank said yes presuming that the shortfall between purchase price and finance figure was to be my deposit, I settled paying the vendor $85,000 and using the $500 for legal cost’s. [sic] …

OK, so how do you read that? On the face of it, it seems Steven Goodey is willing to mislead his bankers when applying for finance. That’s how I read it, am I wrong? (If so, how?) And is that what he teaches his ‘mentoring students’ d’ya think? Cor! Interesting.

Anyway, back my initial point: According to his own account, salesman Steven Goodey bought his ‘first property’ in 2001. So, how odd that Steven should claim just last week (19 May 2011):

I’ve been a full time property investor for 15 years and still love every day of what I do. 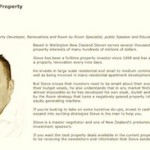 But, that date doesn’t quite figure either. Here’s a claim from his ‘Venture Property’ website June 2009:

Steve has been a fulltime property investor since 1999 … 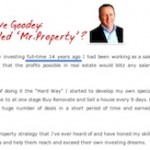 Sheesh! He’s all over the place, isn’t he? What’s going on? Do I detect exaggeration from this salesman? (I’m shocked!) Or is there another explanation?

And then — what does Steve Goodey mean by ‘full time’?

Of course, all of this assumes Steven is being um, straight about his being a ‘full-time‘ property investor in the first place.

How did ‘I bought my first property’ … an $85,000 3 bedroom ex state up and down flat (whenever that actually was) magically convert Steven into a ‘full-time property investor‘ … do you think? Remember, this is the same Steve Goodey who also claims to be “a NZ property investing icon” — see my earlier post: I think I would die.

And as we’ve discussed before (and documented) Steven Goodey worked as a spruiker/seminar presenter/salesman for Richmastery and then became Wellington Richmastery franchisee during the 2000’s, travelling around the country pitching apartment developments like Columbard and his own troubled Due Pensione flats — so what was all that? A hobby at weekends?

And then there’s his $20,000 Millionaire Mastery ‘mentoring’ (cough) with Phil Jones/Property Teachers, his ‘coaching’ (splutter) services, and selling/spruiking US tax liens with Dan Eckelman etc, then the ill-fated Property Guru’s [sic] etc … I wonder, was all that separate to, or a part of, what Steven is now referring to as ‘full-time property investing’?

Hmmm. Sounds to me more like Steve was pretty busy running a hyperbolic edu-tainment sales & marketing business — the sort of finders fee driven ‘locust’ operation Kieran Trass referred to in his missive The Truth Is Out… Don’t Throw Your Pearls To Swine! Does that sound like ‘full time property investing’ to you? I guess it could be a matter of opinion.

From what I can see, it looks to me like Steven Goodey is trying to rewrite history. I can’t help but wonder: if the self-aggrandising salesman and hype merchant (that’s my honest opinion of him, supported by facts) is so …um … inconsistent in disclosing minor details like this … what the hell is his performance like on more important issues?

Trustworthy? What do you think?