Speaking what seems to be true re CNN & Tea Party Express

Impressive and worth watching — Rachel Maddow on CNN’s decision to air what they (CNN) described as the ‘OFFICIAL Tea Party response’ to Obama’s State of the Nation speech: 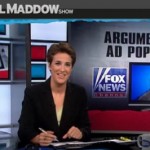 CNN presented an alternate reality of their own making, one in which their debate partner officially speaks for the Tea Party and in which the Tea Party is a co-equal third party of equal stature to the Democrats and the Republicans… and CNN has a competitive and potentially financial interest in selling you that alternate reality as if it is news.

Pretty tough words, but justified, I think. Video below the fold

Visit msnbc.com for breaking news, world news, and news about the economy