« Why are the get-rich-quick boys in such a HURRY?
Refreshingly good advice from a former jailbird »

More ‘straight talking’ … but is that what it is?

Watch this campaign ad (below the fold to stop the YouTube script slowing this page load), and count the bald, slanderous, (defamatory?) statements. Pretty robust stuff.

I wouldn’t dream of saying things like that unless I had evidence (even nailed-tight proof) for the statements.

Maybe he does. But they seem to get pretty ‘out there’ in US politics (… maybe it’s something to do with the prominence given to sedition crimes in the revolutionary history of the breakaway colony?) There seems to be a recklessness in some of the public statements made, as if in US politics, people are not accountable for their public statements. (It’s not always like that. Ask Nick Smith.) 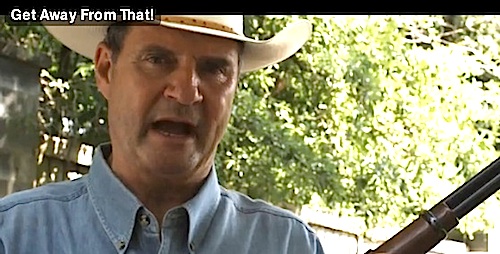 And this guy, Dale Peterson (with Winchester, by the look of it) is running for Alabama Agriculture Commissioner! (Actually, he’s now NOT running — he’s endorsing another candidate by trashing the reputation of the other guy in the race.)
Gee. Bruising. Not exactly top tier politics.

At one level it’s amusing, but the aftertaste, for me, was that it was a nasty hit piece (calling it as I see it) … and it raises an important issue:
Why would anyone same stand for politics if they’re going to be subjected to that kind of abuse and slander?

There’s straight talking and then there’s trash talk. It may be unpopular to say it, but I think Petersen’s ad is out of line with its shallow appeal to a macho redneck base and unsupported personal attacks on his opponent. What’s with the carbine? And firing it(!) and an actor ‘creeping’ towards the yard sign?
What is he saying? “Me big man with gun. Listen to me. Do what I say.” ?

l generally like straight talk. I much prefer it to hype. This campaign ad goes too far for me. Nasty. (But what do I know?) Worth thinking about.

Another video definitely worth watching is the one highlighted in this post: Honesty in advertising — a rare and beautiful thing. It doesn’t demean anyone — not even ‘my wife’s boyfriend’ …