The scariest sentence in the English language (and ‘stolen data’) 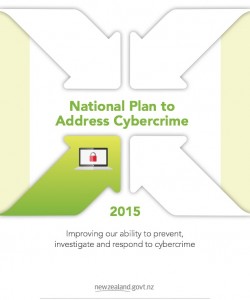 “I’m from the government and I’m here to help.”

Yeah, that’s an oldie but a goodie. Let me use that as an introduction (well, I just did, thanks) to news revealed by the New Zealand Government.

It’s in a very nicely laid out booklet called ‘National Plan to Address Cybercrime’ (right); with a tagline: ‘Improving our ability to prevent, investigate and respond to cybercrime’; and a vision statement: ‘A secure, resilient and prosperous online New Zealand’ (getting the picture yet? It’s all thrillingly super-positive stuff.)

Now it is par for the course when discussing ‘computer crime’ to go to the extremes, child exploitation imagery, sabotage/hacking, money laundering for ‘criminal or terrorist groups’ and use those bogeymen as justifications for surveillance and ‘covert work’ … as well as privacy intrusions such as NZ Customs officers scooping the data off people’s phones at the border. (Oh, did you think I was making that up? Nope. See Tony Wall’s article at Stuff.co.nz: ‘Customs secretly copy data from cellphone’ – and archived here as PDF.)

I mean, who would speak up in defence of sick paedophiles, violent terrorists or dirty rat criminals? Gosh, hardly anyone. So, perhaps those extremes and that mindset (‘it’s all about protecting the kids’) informs this thinking out loud, from  pages 11-12: 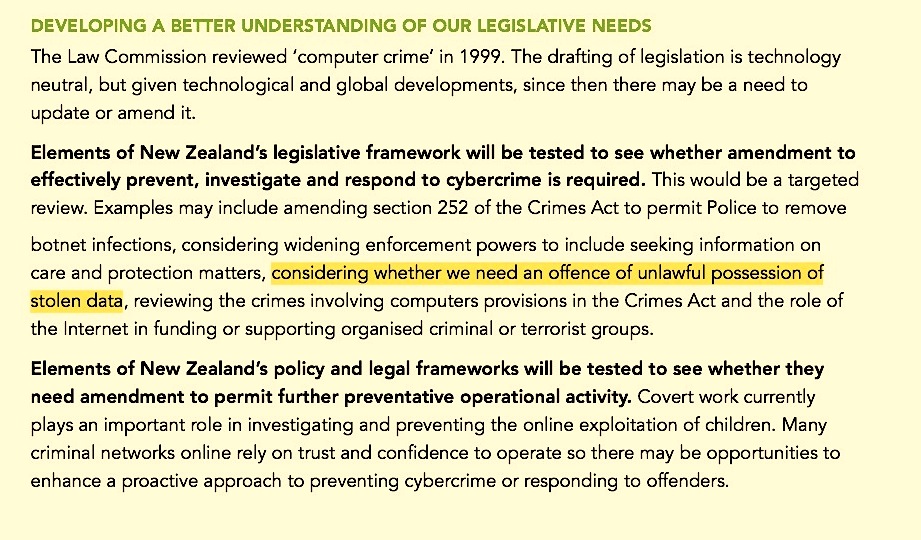 See that? Looking at whether ‘unlawful possession of stolen data’ should be a criminal offence.

Not unlawful use of. Not unlawful publication. Not threatening to unlawfully distribute (or blackmail). No siree.

And wow, let’s think: if ‘possession of stolen data’ was a criminal offence, and a ‘suspected criminal’ needed to be, you know, investigated, how do you suppose our noble law enforcement agencies would go about that?

Gee, maybe they’d need to examine or (gasp) even SEARCH in the areas where a ‘suspected criminal’ might routinely keep his or her (cough) non-stolen ‘data’ … say, their computers or storage devices … or their daughter’s bedroom. Sure, there may be a few teeny-weeny civil rights objections but after all, the police can’t make an omelette without breaking a few USB sticks eggs, can they?

By golly, that ‘unlawful possession of stolen data’ sounds rily bad, eh? Straight on to it chaps!

Thanks to Thomas Beagle, Tech Liberty for the heads-up.