« Maurice Williamson. ‘Blood on the floor’ … and now maybe in the water?
Sarah Harrison of Wikileaks » 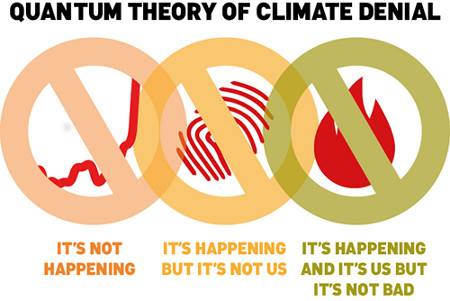 They can, and they do. We see it in the blogosphere all the time. One day a blogger claims that global warming stopped years ago. Next they blame the (previously nonexistent) global warming on the sun. Before long they’re back to denying there’s a problem at all.

How do we explain this weird, counterintuitive phenomenon? It can be explained by the “quantum theory of climate denial.” This theory holds that climate deniers exist in a fuzzy quantum state of denial, simultaneously rejecting many or all aspects of climate science.

Apply a stimulus (for example, show them some scientific evidence) and they collapse into one of the three states of denial. This enables a denier to exist in one state of denial, then transition to a contradictory state, then jump back into the first state of denial again. (emphasis added)

And there’s quite a good analysis of this ‘theory’ being applied editorially by Rupert Murdoch newspaper, The Australian in this article from The Guardian: 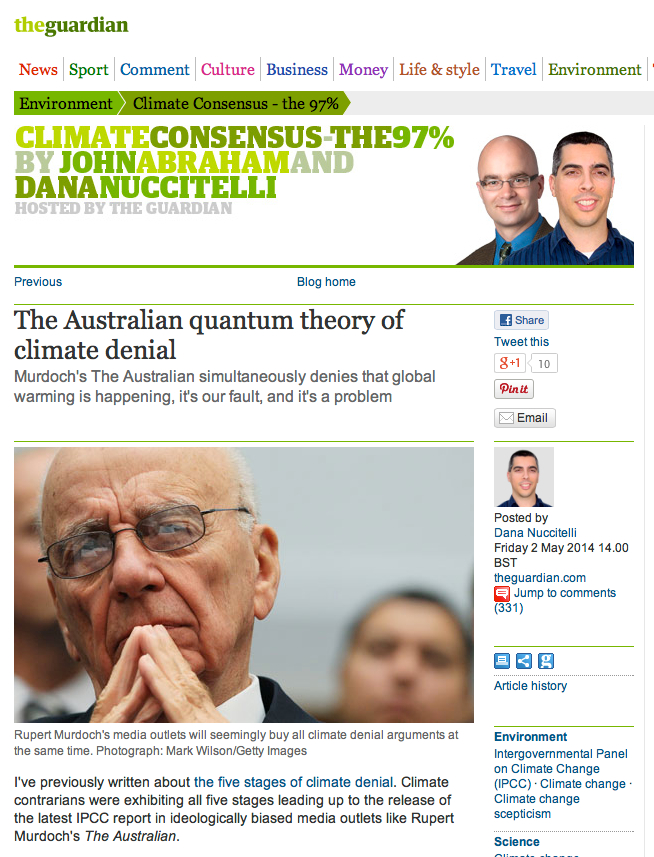 … worth reading, and it links to another good one: Let’s be honest – the global warming debate isn’t about science whose subtitle (and argument): ‘The scientific evidence on human-caused global warming is clear. Opposition stems from politics, not science’ resonates with me.

We need conservatives to be constructive, not obstructive

Ultimately this climate ‘debate’ is not about science. The scientific evidence is crystal clear that humans are causing rapid global warming. The longer we wait to do something about it, the more climate change we commit ourselves to, and higher the chances are for a climate catastrophe. From a risk management perspective, failing to take action to reduce greenhouse gas emissions is just plain stupid. Opposition to climate action isn’t about the science, it’s about the politics and policies.

So let’s debate those policies. The more input we have from different political and ideological perspectives, the better crafted the solutions will be. After all, Republicans came up with the concept of cap and trade as an alternative to government regulation of pollutants, and it was a good, successful idea.

Denying the science and obstructing the solutions will only make the problem worse.