« Why speak up?
Talk about product placement! »

Kiwi Barnaby Jack wowed an American crowd this week by making cash spew out of an ATM machine like magic.

But although he was in Las Vegas, Mr Jack is no magician – he’s a super hacker. …

If it sounds like a criminal mastermind’s dream, it is. But Mr Jack is using his knowledge for good, not evil.

Yes, that’s the test, isn’t it?:
With what aim are we using our time, attention and energy? Huh? 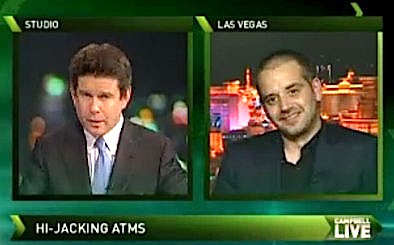 And here’s a link to a video of John Campbell’s TV3 Campbell Live interview with Barnaby Jack.