Let me say, first of all: I don’t know how long it takes to get synthetic cannabis out of your system, but I think it is grossly unfair of people who take issue with the accuracy of Duncan Garner’s use of statements of ‘fact’ (and his political sources) to keep referring to this: 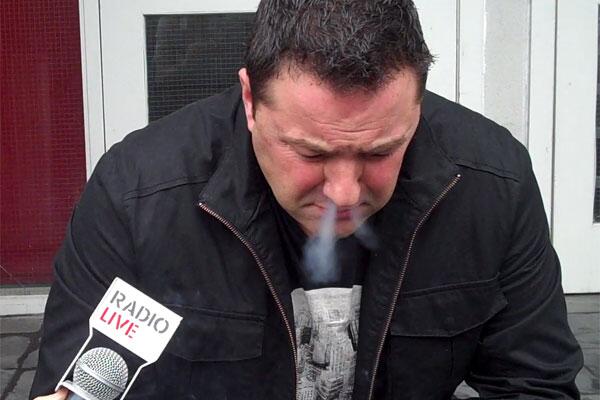 For heaven’s sake people, just let it go. Duncan was smoking that dairy-purchased synthetic high in the line of duty! There is NO EVIDENCE that Duncan’s sometimes slurred and hesitant speech, his erratic, lurching grasp of basic facts, and his childlike credulity have got ANYTHING WHATSOEVER to do with that ‘weed’ he smoked at Radio LIVE in May. That’s just Duncan. He’s been like that for AGES.

WEDNESDAY
O tea leaves at the bottom of my cup! O cured leaves of the tea plant Camellia sinensis which foretell events such as Labour leader David Shearer losing his job in a political coup.
Drain the remaining liquid.
Shake the cup.
Study the pattern of the leaves.
Nothing.
Light up the bong left behind on my 3rd Degree experiments with synthetic cannabis.
O boy!
The leaves form a letter. It reads, “Dear Duncan. Coup on in Labour. Letter of no confidence being circulated. It’s over for Shearer. Watch for his resignation. Well, that’s all for now. Take care. Give my best to Guyon. PS . . .”

See? “Light up the bong…” What’s with that, Steve? That’s just mean. [Read the whole ‘Secret Diary’ here — prepare to curl your lip.*]

It’s unforgivable to keep dredging up Duncan’s short-term use of synthetic cannabis. As if it explains his dodgem-car-like approach to news and current affairs. Duncan’s always been like that, people. According to one of my inside sources, the term ‘like a bull at a gate’ was invented for Duncan Garner. No, really. It was. Good source.

So Duncan was given a bum steer (geddit?) on the ‘Coup on’ and ‘Letter being circulated’ and ‘Paddy Gower has the letter’ and ‘Paddy is going on Nightline with it’ bits.

So what?
That can happen to anyone. Even if they are in complete control of their faculties.

* No doubt, if he remembers, Duncan will immediately consult his lawyers about Steve Braunias’ hit-piece. Right after he conducts another experiment (in the line of duty) to see if a barrel of KFC can fix the munchies …