« Carumba! Scott Adams defends himself using sockpuppet? Yes.
Despite that, your honour, I wasn’t ACTUALLY there » 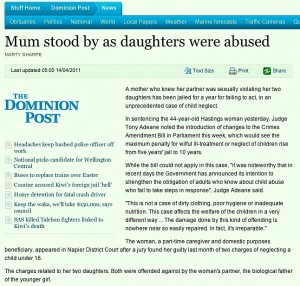 I read this article last week with a shudder. A mother has been jailed after her conviction for child neglect:

A mother who knew her partner was sexually violating her two daughters has been jailed for a year for failing to act, in an unprecedented case of child neglect.

So, effectively, this individual has been convicted of a crime … and jailed … for ‘standing by’ — failing to speak up about her partner raping her two daughters — one aged 9 and the other while she was aged 8 to 11.

As the trial judge Tony Adeane said, the damage done by (1) the sexual abuse and (2) her disgraceful lack of action to protect her daughters from it is “irreparable”.

This ghastly true life story touches on one of my ongoing themes of this blog: Finding the courage to speak up — to blow the whistle on wrongdoing when you perceive it … even if at a risk.

I don’t want to dwell on this particular case any further (you can read more details at stuff.co.nz) and, please understand that I fully realize it can be very challenging to speak up, and there can be a cost. 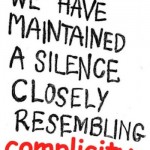 As Sarah so wisely said in her comment on my 2009 post Daring — if there was no risk it wouldn’t take guts:

I’d rather be go down in the annals of history as a failure who tried than be someone who has done nothing to affect change.

Agreed. Silence implies consent as we have discussed before. And sometimes, as Judge Tony Adeane found in this case, it can literally be a crime to stay silent.

As it should be.