UPDATE June 2013 — There have been developments on this. See this post:
Is this what we want? Internet ‘take down’ and indefinite gagging orders? 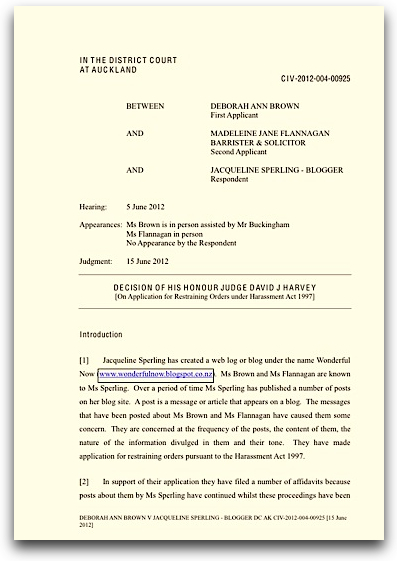 The decision in a recent court case involving allegations of harassment by blog post is instructive on all sorts of levels for what it tell us about the state of internet comment and criticism.

Effectively, the plaintiffs Brown and Flannagan were seeking to gag a blogger.

Judge Harvey is no innocent neophyte when it comes to these important matters: the boundaries between criticism, derogatory statements, defamation, public information and free speech. I’ve quoted him before here on The Paepae in discussion about blogger Cameron Slater’s convictions for breaching name suppression orders via blog. In that respect, I regard his opinions seriously from an intellectual point of view, not just a legal standpoint.

As he points out in his judgement, the application came from two bloggers well familiar with the cut-and-thrust and tone of debate in the blogosphere and the greatly-reduced privacy of people who choose to be part of that ‘community’: Ms Brown and Madeleine Flannagan.

In their affidavits to the court they claimed ‘distress’ at reading what another blogger/ex-friend wrote about them on her blog. They claimed it amounted to harassment. Judge Harvey agreed that the statements and “the combative and aggressively critical tone of her [Ms Sperling’s] blogs” were likely offensive, even meeting the criteria of ‘specified acts’ in terms of the Harassment Act (I might be seen as guilty of that myself, btw), and crucially found:

“But the static or passive blog post cannot, in my view be causative of distress and it cannot be said to be so if a person accesses the material by their own act of choice. By that act that person has taken the communication flow out of the control of the blogger and has assumed control of it.” [230]

So, while Brown-Flannagan may have been distressed (or not, see below) he showed that for the most part, the plaintiffs themselves navigated to the blog to read it (except in the case of a link to her blog post being sent to Mrs Flannagan’s employer)1. So, as I read the judgement, the ‘instrusive’ and ‘causative’ tests required for the comments to be actionable under the Harassment Act were not met. 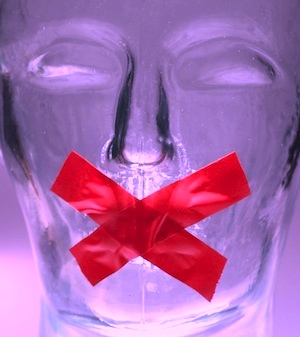 Judge Harvey told the plaintiffs they had contributed to their own distress and, effectively, that they should stop reading nasty things written about them if doing so upset them so much.

He said Ms Brown couldn’t complain about photos already published on the internet being used, nor about being ‘talked about’: “…there may have been distress it was not directly caused by the posts of Ms Sperling but flowed from Ms Brown’s own engagement with the Internet and particularly the blogosphere.” [239]

Mrs Flannagan likewise, wasn’t seen by Judge Harvey as a babe in the woods:

“Ms Flanagan is also a denizen of the Internet space and an active one too. She has a “real world” profile as well and has involved herself in matters of controversy – such as the abortion debate. She, like Ms Brown, is well aware of the robust nature of communication within the Blogosphere and has little hesitation in participating in debate, contributing to comments and actively engaging in discussion. [241]

… Ms Flannagan, like Ms Brown, engaged and was prepared to enter the lists with Ms Sperling. In view of her awareness of the, at times heated, nature of the debate I consider that a reasonable person may well conclude that she might get burned. In addition she made unprompted visits to Ms Sperling’s website and in that regard could be said to have contributed to her own distress, if indeed there was any.” [242] emphasis added

In other words, they had to expect some harsh comment. Get over it.

I’ve observed enough court hearings and read enough decisions to recognize the judge’s code words ‘there may have been distress’ (Brown) and ‘[Flannagan] contributed to her own distress, if indeed there was any‘ remarks for what they are: pointers that he kinda-sorta found Ms Brown’s and Mrs Flannagan’s claims of ‘distress’ implausible.

The result: Judge Harvey dismissed their application for restraining orders, saying very clearly that while the comments on the defendant’s blog may have been offensive, insulting and even qualified as ‘specified acts’ as far as the Harassment Act was concerned, in all but one incident, they couldn’t be seen as ‘causative’ of any ‘distress’ because the plaintiffs effectively sought the comments out.

That is an important distinction, and as a blogger who is on occasion, harshly critical of other people — by name — myself, I’m grateful that Brown-Flannagan took their (flawed and failed) court action which sees that issue clarified like this.

But it’s too bad Jacqueline Sperling had to pay the emotional price for this. The ghastly smears directed at her by team Brown-Flannagan sock puppets and anonymous proxies are disgusting. The Christianity which is claimed to be a common inspiration of the participants in this melodrama is not making much of an impact from where I sit. An anonymous blogger supposedly defending Madeleine Flannagan is peddling very nasty stuff in attempts to discredit Ms Sperling. I guess he’ll be at church on Sunday. He may not realize he’s not actually doing Flannagan’s reputation any favours.

The case failed before even reaching the hurdle of the NZ Bill of Rights Act ‘freedom of expression’ clauses, although Judge Harvey, as one would expect, touches on those — emphasizing the obvious truth that freedom of expression is only a challenge if you disagree with what’s being expressed. As I sometimes do.

The ‘engaging in debate’ aspect was also, as I read it, an important factor. (Truthfully, I actually think better of people who are willing to engage, and put their side of an argument … but I’m intolerant of abuse, especially by dishonest anonymous sock puppets. We’ve discussed that a lot here. (For instance see ‘Potshots from behind a mask of anonymity are, by definition, cheap‘)

As already noted, Judge Harvey’s decision records Ms Brown and Mrs Flannagan ‘engaged’ in online debate — in Ms Brown’s case he described her contributions as ‘aggressive and hostile’, in Mrs Flannagan’s ‘robust’ with, as noted, a reasonable expectation she could get ‘burned’, saying “In my view a reasonable person in [Mrs Flanagan’s] circumstances would not be distressed by the posts, with one exception.” [243]

The Flannagan-Brown argument, as he shows, falters on the claim that the blogged comments ’cause’ distress (if any) because the ‘victim’ has to go and read them. In that respect he showed the court action was pretty much a legal goof — action taken under the wrong Act. (A clumsy mistake for a lawyer?) —
Update: I could be wrong about this, but from discussions I’ve had about the matter, it seems to me the Harassment Act was/is intended to give people the same sort of ‘protection’ from distress-inducing intrusive behaviour as the Family Law protections … you know, non-molestation, restraint etc. but from non-family or ex-Spouse-type people. In that respect, I can now see why Mrs Flannagan took her action under that Act, and withdraw my ignorant comment about it being a ‘legal goof’. (No-one has asked me to withdraw any comments.) – P

Another matter that is common to both applicants is their concern about the way that they may be perceived by others who may read Ms Sperling’s posts. That, in my view, points not to distress but to reputation and there are other areas of the law apart from the Harassment Act that deal with that. [244]

It’s not enough to claim distress. That failed. If they felt the blogger defamed them, that’s a different legal ‘equation’ … and by no means a safe bet. We’ve discussed the challenges proving ‘harm’ arising from false statements on The Paepae before, ‘On the courthouse steps‘:

It’s one thing to say: “Oh those statements are technically untrue and my feelings are hurt”, quite another to show demonstrable financial harm (a drop in sales, cancelled subscriptions etc) as a result of the ‘bad’ publicity or those specific comments.

On a related note, it seems to me that ACC minister Judith Collins is on a quixotic quest to prove ‘harm’ to her reputation as a result of published speculation about the source of a ‘leaked email’. Her lawsuit against two Opposition MPs is like a litmus test. Collins faction fans think she’s just great doing it. It plays to all their ‘Crusher Collins’ fantasies. Many other observers seem to think she’s merely grandstanding and the case will never get to court.

As a lawyer herself, Ms Collins is perhaps in much the same situation as Mrs Flannagan: Feeling distressed and wanting to ‘punish’ [Update: or suppress?] the person(s) she sees as responsible for that distress, feeling confident in her own judgement and training in the law. Ms Collins would do well to read Judge Harvey’s decision in this case: CIV 2012 004 925 Brown & Flannagan v Sperling

The natural instinct to ‘Silence the critics!‘ is strong, but sometimes we have to overcome our reflexes.
I’m not saying it’s easy.

1 I’ve got to say: I think the act of emailing the employer of someone you disagree with online is pretty despicable. That’s nasty, unnecessary stuff, if you’re reading this Jacqueline. It’s crossing a boundary. That’s what Cameron Slater does. Enough said.

Facts are stated to the best of my knowledge and commentary is my honest opinion. Corrections or clarifications are always welcome by email. Comments are open.
– Best wishes, Peter Aranyi © 2012 All rights reserved.

Responses
See also: Speaking up for Madeleine Flannagan
and A response from Matthew Flannagan