I heart Rachel Maddow … trying to increase the cost of lying 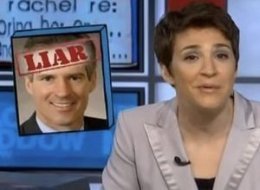 Remember the full page ad she took out to say it wasn’t true?

He’s apparently still saying it is.
So, Rachel Maddow let Scott Brown have it straight …

You [Senator Brown] made something up that’s not true. You have such a lack of respect for your conservative donor base around the country that you don’t care if what you tell them is true or not. You think it doesn’t matter in politics if what you say is true or not.

‘Just give me the money,’ makes for a good story, a good scary liberal story.

‘If you feel scared, then send me your money.’ Who cares if the story’s true or not. Who cares.

Turns out, I care.

Somebody’s gotta draw a line somewhere. Lying should have consequences. You shouldn’t get to flat out lie in the conduct of your business as United States Senator and get away with it.

So, I recognize that this is probably futile, but I’m going to say it. Senator Brown, you need to stop lying about this.

As she says: “Somebody’s gotta draw a line somewhere. Lying should have consequences.” and right at the end of the video clip below:

“I’m trying to increase the cost of you lying.”
.

UPDATE: I was looking at the photo of Scott Brown over Rachel Maddow’s shoulder and thinking, ‘Where can I get a ‘LIAR’ stamp like that? Then look what I found: