Whale Oil truth FAIL? A note to the Standards Committee

Thank you for your correspondence of 15 October received yesterday ‘Hypocrite, your name is Peter’ which followed my requests for True Blogger Cameron Slater to advance a single shred of evidence for his allegations of ‘illegal’ campaign advertising and ‘vandalism’ which I quote below.
In light of your note, I felt I should respond to you directly. 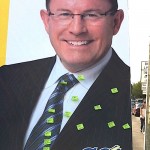 Green coloured post-it notes on a John Banks campaign hoarding - but does that mean 'the Green Party is breaching electoral law'? Outraged John Banks supporter and National Party blogger Cam Slater says it does — but failed to supply any evidence for his smear when asked. (Pic: Cameron Slater)

The Green party has been caught astro-turfing, their candidate in Hamilton got the sack for lying to a newspaper and now in Epsom they are attacking billboards of John Banks with illegal stickers. [Comment: This bold statement appears to have NO basis in fact.]
It looks like the Green Party is being advised on electoral law by the Labour party. [Neither does this.]

Here is a shot I took this afternoon on the corner of Market Road and Great South Road. They have covered John banks’ (sic) sign with little green stickers. [“They”? The Green Party? Prove it.]

A close up shows Green messages, with no authorisation statements in clear breach of electoral law. [Breach perhaps, but by the Green Party? Cam Slater can apparently offer NO evidence for that serious allegation.] Not to mention the vandalism of another candidates (sic) sign.  [What a very poor example of ‘political blogging’ this is.]

As I conveyed to Cam in a comment on his blog post, by coincidence I observed apparently the same John Banks Market Road campaign hoarding adorned with post-it notes within hours of his photographing it last Friday afternoon …

Peter A:
I don’t think it was the Green Party, Cameron.

I drove past a John Banks hoarding similar to this (perhaps it was this one?) near Market Rd this evening about 6.00 … It had a bunch of those post-its scattered over it. Standing on the street corner, shouting at cars stopped at the traffic lights (er, like mine) was a very loud ‘enthusiastic’ woman decrying “American corporate culture” in NZ. She held a hand-drawn ‘poster’ backed with cardboard in her hands with talking points. VERY amateurish presentation.

She abused McDonalds — ‘What have they ever given us except obesity and diabetes?’ and expressed disgust that (in her view) the Prime Minister John Key is not standing up to an invasion of what she labeled ‘money-focussed foreign corporate culture’ (or words to that effect). She shouted that NZ’ers are just a walkover. Thankfully the traffic light turned green (ha!) and I drove away from her.
It decidedly did NOT look like an official Green Party campaign to me, and I saw no Green branding anywhere. Did you, Cam? Or do you have some other evidence to confirm your ‘lead’ statement?:

.I don’t see your grounds for making such an allegation.

As you and the Standards Committee of the Whale Oil website will no doubt have already observed, this interchange followed…

Whaleoil in reply to Peter A:

Maybe the words “Go Green” on fair percentage of them, the green stickers???
—
Peter A in reply to Whaleoil:

With respect, Cam, that’s a flimsy basis for you to advance such definitive statements and serious allegations against the Green Party … “illegal stickers”, “clear breach of electoral law” and “vandalism”.

I could be wrong, but I don’t think your claims have any veracity. Do you have anything more concrete?
Or is this satire? (Sorry, it’s not clear if it is…) – Peter
—
Whaleoil in reply to Peter A

THe stickers are illegal, i need no more evidence of that, they are a cear (sic) breach of electoral law in that they are missing an authorisation statement, and it is vandalism as they are on a sign of a competitor.

—
Peter A in reply to Whaleoil

Perhaps I haven’t been sufficiently clear: you have advanced NO solid evidence of the Green Party’s [alleged] involvement in these acts.

Yet you state they have ‘broken the law’ etc without equivocation. That seems irresponsible.
-P

Ms Bride, let me repeat: I observed NO indication of NZ Green Party involvement in that so-called ‘vandalism’. Quite the reverse in fact, as I laid out: A bombastic individual shouting anti-capitalist slogans at cars stopped at the traffic lights … with amateur materials — nothing resembling Green Party branding.

While of course sympathetic to any John Banks supporter offended by the placement of such post-it notes, I questioned the basis for Cam’s allegations that the Green Party was ‘breaching the law’ etc.

I saw (and see) NO foundation for him to make what amount to unproven scurrilous accusations against the Green Party. Perhaps the allegations are true, but if they are not, your website has published false and misleading statements against an identifiable group of people and organisation.

Do I detect a pattern?

It’s not the first time. Last weekend I received a message from you, Ms Bride (‘I don’t like you, I question your motives … this is my last word on the subject’) after I criticised Cam’s apparently equally baseless allegation that the Labour Party has secretly employed a former colleague of mine as a ‘paid blogger and political commentator’. According to Cam, this [alleged] subterfuge was part of a Labour conspiracy to steal underpants influence political debate in the NZ media.

In that case Cameron’s published allegations were quickly refuted and NO verifiable evidence in support of his smear was advanced by the Whale Oil operation — as I discussed in Cameron Slater’s defective moral calculus. It seemed to me to be another truthfulness quality control FAIL for Whale Oil.

Ms Bride, as I am sure you and the Standards Committee are aware, the NZ General Election is approaching. I observe your website’s ‘output’ has increased considerably in recent weeks. One also can’t help but be impressed by the site’s striking redesign. Congratulations. It’s very clear and clean-looking. (Although I think the ‘Search’ box is in the wrong place, speaking as a visitor.)

No doubt these moves are part of your concerted effort to displace National Party luminary David Farrar’s Kiwiblog as the ‘top-rating’ NZ Right Wing social media website (also evidenced by the knocking campaign the Whale Oil site has been running against Mr Farrar?) Good luck with that.

But it seems regrettable to me that your operation’s headlong rush to chase page-views at a time of heightened interest in Politics appears to be accompanied by a lowering of ‘standards’ regarding truthfulness and accuracy. (Or have they always been this low?) Publishing such allegations without proof can only adversely affect your organisation’s reputation.

The blogosphere already has more than enough organs pumping out misleading partisan hyperbole, in my personal opinion. Aim higher.