« Images of death in the street
Phew! »

Dodgem or dipstick? The miraculous rehabilitation of Chris Trotter from scheming Labour flunky to honourable lefty 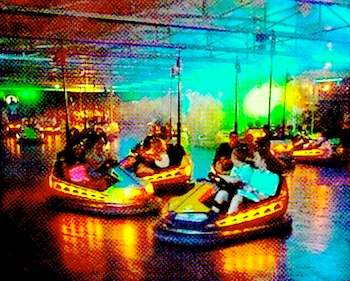 David Lange once described Mike Moore as not so much having a train of thought but ‘Dodgems of thought‘. In a way it was a compliment, because Moore was unquestionably an ideas man — he generated lots of ideas. Ideas spilling over each other. The trouble was, as someone who I can’t remember said, that he couldn’t readily distinguish between the good ones and the bad ones.

I was reminded of Lange’s ‘Dodgems of thought’ phrase this week when I observed a right wing blogger smear a political commentator who I respect Chris Trotter as a Labour ‘flunky’. Cameron Slater named Chris Trotter as [allegedly] part of a ‘scurrilous’, unethical Labour plot to spread [allegedly] unsavory rumours about former National Party cabinet minister, reborn as an ACT Epsom electorate MP John Banks.

Labour’s smear tactics in Epsom by Whaleoil on October 21, 2011
There is some pretty scurrilous stuff happening in Epsom, serious muck-raking and innuendo being shopped to the media, even Trevor Mallard is trying to spread it along with other flunkies like Martyn Bradbury and Chris Trotter.
It seems that Labour, bereft of any other ideas are hell bent on trying to undermine ACT as a strategy. Little do they know that ACT is quite capable of doing that all by themselves. However it is apparent that there is a concerted Labour strategy in play now to attack ACt [sic] at every opportunity. Mallard is blogging and Tweeting endlessly about it, their lap-blogs are likewise talking it up, their media proxies are busy talking about polls and all of it focussed on Epsom and ACT.

Wow! Setting aside the cringe-making Waaaaaaaah! factor and Cameron’s vicarious persecution complex (‘a concerted Labour strategy in play’, ‘media talking about polls’, ‘OMG Mallard is blogging & tweeting’ — Hello? You know there’s an election coming up?) and the hypocritical hand-wringing about ‘lap-blogs’ (pfft! Can you hear yourself, you poodle?) … the eyebrow-raising part of Cameron’s fevered rant was this:

He claimed Chris Trotter was [allegedly] in cahoots and scheming with Martyn Bradbury and Trevor Mallard. That’s a new twist, I must say. Chris Trotter? A conspiracy? With those two? That’s surprising. For reals?

A Clarification by Whaleoil on October 22, 2011
Yesterday I posted about Labour’s dirty tactics in Epsom. In the opening paragraph I mentioned Chris Trotter. I have now removed it.
I have had an offline chat and clarified some details and am now satisfied that Chris Trotter remains in my mind as an honourable lefty. He is a person I respect and can share a beer a with and someone who’s opinions I enjoy even though I may not agree with the politics of opinions. …

Oops.
So, in the space of a day on Planet Slater Chris Trotter has gone from a scheming ‘Labour flunky’ to ‘an honourable lefty, a person I respect and can share a beer a with’.

Gee. Go off half-cocked much, Cameron?

Fixation and an addiction to conspiracy theory can actually make you indistinguishable from a Dipstick. It’s like I said in Be careful what you believe…

As for ‘the media talking about polls’ … crikey. B*stards. What next?

A retraction? Will wonders never cease?

It’s nice to see there are apparently circumstances where Cameron Slater will actually retract his false and misleading statements … so far as I’m aware, he hasn’t yet done so in the two recent BS conspiracy allegations I highlighted: Labour’s [alleged] secret agent blogger/commentator and the ‘Green Party’ post-it note ‘vandalism’ plot against the National Party ACT Party candidate in Epsom John Banks.

But one can hope, I guess. We are, after all, learning organisms.