« Mealy-mouthed
When hyper-linking gets in the way » 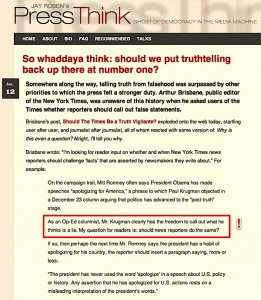 Should news reporters call out what they see as lies? Are you kidding me?

Forget (for now) the place of unwanted ‘opinion’ in ‘news’ (or somewhere near by) — there’s a bigger issue at stake in modern media … whether (or not!) to call out politicians and other newsmakers for false statements they make.

As noted elsewhere, I am troubled by political activists and proxies masquerading (or fancying themselves) as something akin to news media who promulgate exaggerations and half truths. That’s beyond the pale, in my opinion, a truth FAIL, whether they like it or not … or whether they disclaim with ‘FFS, I am not a journalist …‘ when it suits them … while schizophrenically also aspiring to ‘media’ privileges like membership of the parliamentary press gallery. Oh dear.

Telling the truth seems to me to be a requirement.

But the tragedy of modern media (all media) is a sometime reluctance or unwillingness to act as what the NY Times public editor Arthur Brisbane recently called a ”truth vigillante” (as if that’s a bad thing) — and he posed it as question(!): Should The Times Be a Truth Vigilante? My response to seeing that headline in my Twitter stream was “Should the Pope be a Catholic?” Gee, Arthur. Duh.

Journalism professor Jay Rosen, whom I quote here from time to time, posted on his PressThink blog what I think is a very good response, including in part, this lament of lost courage:

Something happened in our press over the last 40 years or so that never got acknowledged and to this day would be denied by a majority of newsroom professionals. Somewhere along the way, truthtelling was surpassed by other priorities the mainstream press felt a stronger duty to. These include such things as “maintaining objectivity,” “not imposing a judgment,” “refusing to take sides” and sticking to what I have called the View from Nowhere.

No one knows exactly how it happened, for it’s not like a policy decision came down at some point. Rather, the drift of professional practice over time was to bracket or suspend sharp questions of truth and falsehood in order to avoid charges of bias, or excessive editorializing. Journalists felt better, safer, on firmer professional ground–more like pros–when they stopped short of reporting substantially untrue statements as false. One way to describe it (and I believe this is the correct way) is that truthelling moved down the list of newsroom priorities. Other things now ranked ahead of it.

But wait a minute: how can telling the truth ever take a back seat in the serious business of reporting the news? That’s like saying medical doctors no longer put “saving lives” or “the health of the patient” ahead of securing payment from insurance companies. It puts the lie to the entire contraption. It devastates journalism as a public service and honorable profession.

Devastate, like decimate and demolish, is a word that is often carelessly misused — and not just by sports reporters — but it actually fits in Rosen’s article. Letting go of the priority to be truthful — to report truthfully — is devastating, and eviscerating.

It’s awful to see some in the working news media who have backed away from making a ‘truth’ call, even when the spin they’re reporting is so obviously truth stretched too far.

Some demur for what looks like a lack of courage to even pursue hard question lines from a fear of losing access, or worse, a fear of being ostracized by the ‘newsmaker’ in question. That their management tolerates/condones/encourages this gutlessness is, well, ghastly.

To me, it’s a shocker that the question should be asked in Arthur Brisbane’s terms:

I’m looking for reader input on whether and when New York Times news reporters should challenge “facts” that are asserted by newsmakers they write about.

Nice dose of irony in a tweet from Jason Linkins:

Any thoughts? Or further examples?