« Laughing all the way to the Banks
Loving the Olympics »

In defence of the National Party’s right to determine WHO holds positions of influence in the Party, and to exclude those it sees as ‘negative’…

It seems the judgement by those in the National Party higher echelons that Hawkes Bay’s Simon Lusk is a Danger To The Party persists.

I mentioned earlier that leaked National Party minutes were reported wherein Simon Lusk, who apparently operates as a kind of ‘behind the scenes’ ‘campaign advisor’ for hire (by referral only) was described as someone motivated by ‘a very negative agenda for the Party’ ‘that poses a serious risk to the Party‘.

In a new development: if Simon Lusk’s sometime promoter/accomplice (co-accused?) attack blogger Cameron Slater is to be believed (a stretch at times as others have observed) it seems wannabe National Party candidates are being screened for exclusion by the Party with a question which asks them if they are or have ever been ‘affiliated’ to Simon Lusk. (Whatever that means!)

*IF* this claim by Cameron Slater is true, it seems the shadowy Simon Lusk has made an impression on the National Party leadership — but NOT a good one. An association with him appears to be toxic to the career of any aspirant Party candidate ...

What happened to freedom of association? you may ask. Yeah, well, it crossed my mind too. But let me play devil’s advocate for a moment and defend the National Party hierarchy’s absolute right to exclude what they see as malign influences from the Party of which they are stewards. (I’m not saying that they’re the devil!)

The men and women in National’s leadership making those judgements about Simon Lusk and Cameron Slater can’t just be said to be stupid or ill-informed, despite the near constant rain of abuse and denigration poured on some of them in a bombastic, jingoistic manner e.g. ‘Goodfellow and his stooges’ etc as a reference to the Party President? Tsk tsk. 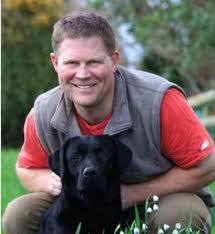 Harry Truman said: "If you want a friend in Washington, get a dog." Looks like Simon Lusk (above) already has.

Presumably, *IF* Cameron Slater is reporting accurately (yeah, I know) Simon Lusk is a marked man. And so are his apprentices. It’s a combination of give a dog a bad name and birds of a feather.* The Simon Lusk stigma, basically.

There have to be, surely, what top National Party figures regard as sound reasons beyond personality politics for those conclusions. Don’t there?

A vendetta is a “negative agenda”

I’ve been puzzling about what National’s senior whip Michael Woodhouse (who wrote the leaked minute) could have meant by his description of Simon Lusk as posing a ‘serious risk to the Party’ and driving a ‘very negative agenda for the Party’. Hmmm.

One thought comes to mind: Simon Lusk’s promoter Cameron Slater appears (to me) to be driven to at times act vengefully (and irrationally) — irrespective of likely outcomes or collateral damage. For instance, Law prof Andrew Geddis used the poetic title ‘Cameron Slater’s slighty wonky jihad’ (Part I & Part II — worth a read) to describe and examine how Cameron acted in relation to breaching name suppression orders, leading to his convictions:

[W]hen [Cameron Slater] engages in a poorly thought out campaign on his blogsite that impacts on the lives of other people in a pretty major way, and two of his friends say his depressive illness and the medication he takes for it have strongly affected his reasoning capabilities (to use shorthand, he is “mental” in the sense that “there is limited reasoning”, not “deranged or demented”), I think it worth pointing out the connection. Why? Because it shines a quite important light on whether it is a good idea to put the decision on whether or not to reveal the name of accused persons (and thus alleged victims) in his hands. No more and no less than that – it says nothing about him as a person or anything else he may choose to write on his blog.

Despite his ceaseless self-promotion as some sort of ‘conscience’ of the National Party and repeated attempts to position himself as a far-sighted prophet crying in the wilderness, lamenting daisies crushed in the caterpillar tracks of the Party machine, Cameron seemingly fails to grasp the impact of his near-continuous public displays of nasty, personal, churlish disloyalty and disrespect for his fellow Party members. These things hurt the National Party. That seems indisputable.

So Cameron Slater has become more than just a loose cannon. It seems he is seen as ‘an enemy within‘ the National Party. And Cameron’s guru/Svengali Simon Lusk with him, apparently. From what’s emerging, the current National Party leadership has identified Simon Lusk as having a potentially baleful influence on future MPs: “A very negative agenda for the Party” really doesn’t sound flash, does it?

If the ‘screening questions’ reproduced above are accurate, well, that looks pretty bad. As already noted, the Party hierarchy must have its reasons for reaching that conclusion. I don’t know what the reasons might be, but why should anyone doubt the leadership’s right to protect the Party from someone they see as operating a ‘negative’ agenda?

Whatever lies underneath, judging by this ‘screening’ issue, it seems an ‘affiliation’ with Simon Lusk may be the kiss of death for any aspirant National MP. C’est la vie.