« Start spamming young…
Nothing to hide but NOT nothing to fear »

Spotted this from Glenn Greenwald re TV personality Chris Matthews … 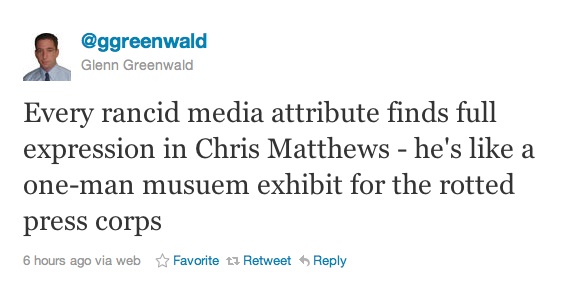 Now, as I replied, some might see such a strident comment about a fellow ‘peer in the industry’ as ill-motivated unprofessional. Not me. I think someone paying attention to the ‘industry’ (like, in this case Greenwald) is obliged to highlight what you see as failings by ‘peers’.

To which I would only add:
The case is made weaker, however, not stronger, by comments that resemble personal abuse. To be fair to @ggreenwald, and anyone else trying to express an opinion in 140 characters or less (my own comment back to him took TWO tweets, after all) it’s sometimes easier to say ‘I think So-and-so is a dirty ratfink liar’ than it is to lay out your case (as we discussed briefly in Linking to sources…) — but not as convincing.

Sometimes, as others have said, the bile rises … and instead of just shouting at the TV in the privacy of your own home (while we still have that commodity) one expresses in a social/social media context with what can (strongly) resemble ad hominem attacks.

But the alternative, keeping a ‘professional silence’ when observing shortcomings or misstatements or, in Matthews’ case, what sometimes looks like a go-with-the-flow kind of collusion,  isn’t acceptable practice.

When people who are twisting the narrative, or bending reality to within an inch of its life, or downright lying-and-getting-away-with-it — because of a lazy or gutless press — do that, it is infuriating to those observers who want more, expect more, DEMAND more.

So, go for it Glenn Greenwald. Don’t hold back.

Of interest to me on another level completely is the argy-bargy between the AOL-property Huffington Post and the NY Times re comparative web traffic. Quite a bit of spin and FUD is being spread … and it surprises me how many people buy the ‘cheeky upstart topples crusty old-timer from its perch’ narrative.

I’ve been consistently impressed by Jeff Bercovici at Forbes and his, hang-on-let’s-take-closer-look-at-those-‘facts’ approach, which I favour. He’s good. 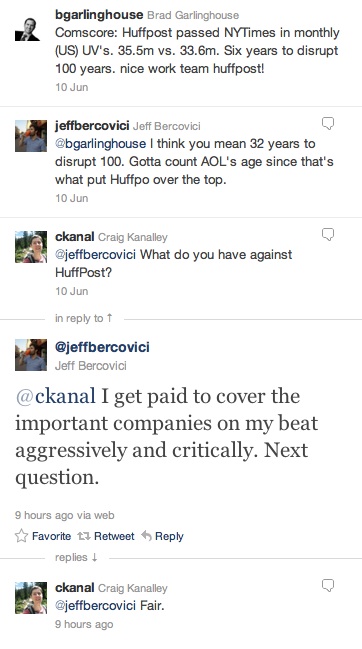 Argue with the facts, not the person's motivation, Craig. Jeez.

Read his ‘Huffpo Tops NY Times in Traffic, But With a Huge Asterisk piece which sparked a silly ‘‘Why do you hate us?‘ response (almost literally) from a Huffington Post staffer (‘Senior Editor, Traffic & Trends’) on Twitter … and a quick, restrained, elegant slap-down from Bercovici:

@ckanal I get paid to cover the important companies on my beat aggressively and critically. Next question.

Nice. And ‘Fair’ — as Craig Kanalley himself admitted. Note the claws are still in the paw.

We’ve discussed the shallowness of this ‘question the critic’s motivation rather than the facts’ approach to criticism before here at ThePaepae.com in No hard feelings – present some facts and my own personal POV about Huffington Post’s decline in what I saw as its headlong pursuit of ‘traffic’ here: ‘Unjust enrichment? Well, yeah, maybe‘.

But my hat’s still off to business and political operator Arianna Huffington and her team for sheer IMPACT. Wow. Will it last? Probably not.