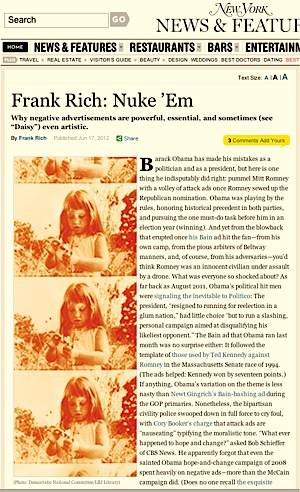 There’s a fantastic article about negative campaigning in this month’s New York magazine...

Why negative advertisements are powerful, essential, and sometimes (see “Daisy”) even artistic.

It includes this distinction, which touches on some of the discussion we’ve had here earlier about political activists like Cameron Slater purporting to be ‘media’ when they’re really just campaign propagandists, slanderers and attack dogs.

Doing it [negative campaigning] right doesn’t necessarily mean doing right by the facts. An effective attack ad doesn’t require strict accuracy as long as its broad caricature rings true. It has to land a punch as propaganda, not journalism.

The deceit is when people like Cameron and David Farrar pretend to act as journalists, using words like ‘investigation’ ‘exclusive’ ‘breaking news’ as trappings and affectations … when, considering their activities and their obvious prejudices, they’re actually anything but. (Their ethics are questionable, it seems to me.)

“…trying to sue me for defamation and claiming damages of $200,000.
…It appears he hasn’t used a lawyer for this. I’ll apply to have it thrown out as vexatious.
In his own words he said that everything I had was true. His emails, his hard drive, his documents, his story … and now he is trying to shut me and other media down.

Ha! “… me and other media“? Oh really? Whatever happened to Cameron’s earlier heartfelt declaration?:

“Peter, FFS, I’m not a journalist, I’m a par­ti­san blog­ger, when will you fuck­ing under­stand that?”
— Cameron Slater

Or his declaration, when passing gas opinion about the real news media’s actions re the teapot tapes:

“For a start I am not a journalist” — Cameron Slater.

No, I agree. Indeed he is not. So quite what he is trying to achieve with this ” …now he is trying to shut me and other media down” malarkey, I do not know. As I said in ‘Lack of truthtelling devastates media, old & new‘ …

I am troubled by political activists and proxies masquerading (or fancying themselves) as something akin to news media who promulgate exaggerations and half truths. That’s beyond the pale, in my opinion, a truth FAIL, whether they like it or not …

Anyway, read Frank Rich’s article about negative campaigning. You may recognise some archetypes. And some of the tactics.