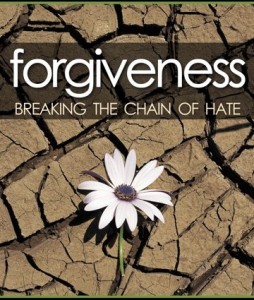 It’s been a while since we’ve discussed forgiveness here, although this post, “Do I believe in the forgiveness of sin?” and this one, Remembering Karla are never far from me … especially when I consider what I’ve learned and observed about the toxic effects of ‘harbouring’ unforgiveness.

Last night I read of journalist/blogger/writer Andrew Sullivan’s need to distinguish between extending his own forgiveness to those who have hurt him personally through stumbles or failures, and the role his ‘mission’ as a public writer to, effectively, hold grudges. (It’s what I refer to here at The Paepae as ‘having an attention span’.)

Forgive, Andrew. Forgive. Either that or stop talking about faith, grace, mercy, the whole shooting match. Because it seems, in this instance, you don’t get it.

To which Sullivan says…

The trouble here is the distinction between public officials and their public acts and private human beings in your actual life who fail or stumble or hurt you. I truly do try and forgive those who have done me wrong (it isn’t always easy) in the warp and woof of living. But in assessing public affairs – like, say president Bush authorizing torture or backing the Federal Marriage Amendment – it seems to me to be a different case. As a public writer, it is my job to criticize, to judge when someone’s public statements in public office are defensible or wrong. I play a role as a blogger which requires me to be much tougher and harsher than in real life – when I am dealing with public figures, public statements and public records. I have met Bill Clinton only once. I am dealing with the public, not the private, man.

As I said, it’s worth reading the discussion in context at Sullivan’s website The Dish: Clinton and forgiveness. I rate this guy very highly. He’s one of my favourite writers and thinkers alive today, who happens to be a Catholic.

I agree with Andrew Sullivan that making public criticisms — of the sort that I blunder my way through here at The Paepae — sometimes thinking out loud, working out what I think as I go — is different from (or ‘different to’) the sort of let-it-go-for-your-own-good forgiveness I seek in my personal life.

Journalists, bloggers and other public writers* have a duty to their readers to not swallow the carefully-manicured talking points, photo-ops, and spin-driven agendas of those in public power.

That’s partly why I felt uneasy about news that emerged over the weekend about a cabinet minister’s staff sanitising Wikipedia. (Whoa!) The archivist in me (and the taxpayer) is offended by that behaviour, which, Justice minister Judith Collins, through a spokeswoman, has confirmed did take place.

Holding politicians to account for their statements and actions (and those of their minions), putting new actions in context of old (e.g. keeping count of the number of dubious civil service appointment processes a cabinet minister presides over. Or those a prime minister does) isn’t being unforgiving. Doing so is fulfilling a role — an important one — just as Andrew Sullivan argues. Yeah, he’s right about that.

I forgive not to be a saint or obey a commandment. I do it because it’s my nature, and to reduce what I’ve referred to here before as ‘spiritual risk‘. (And recommend you do too.) See my comments about ‘forgive and forget’ in the post I mentioned above.

We’ve had reason here, lately, to consider the ‘Love believes all things, hopes all things, forgives all things’ and related definitions. And still we’ve found ourselves concluding that ‘You will know them by their fruit’ DEMANDS that we assess the fruit, as Graeme pointed out — not necessarily as a starting point.

Telling the truth, likewise, is hugely, strongly important. Being authentic. And sometimes that means calling a lie out for what it is. (There’s also a whole other conversation we could have about the frequently deployed gleeful use of faux outrage in order to condemn one’s political or other enemies. Let’s save that for later.)

But not hating anyone.

Personal animosity, of the sort that some people express online (or in any other medium) toward those on their ‘enemies list’ … well, that is toxic. To all concerned.

Despite my outspokenness at times, here and elsewhere, I don’t set out to collect enemies. And while I may appear to despise some arguments as shabby, venal, dishonest and crooked, I really try not to see or portray people that way, unless forced to, and even then, I try not to ‘carry’ a burden of unforgiveness.

My wife and I were part of a two-week business training course in Hawaii some time ago and were lucky enough to interact with a man who worked for years with Colonel Harland Sanders setting up and policing standards at Kentucky Fried Chicken franchise stores in the US. He told us that on his inspection tours the Colonel would personally scrutinize the premises, staff presentation, and the food prepared and served by the franchisees — but, unlike his companion, would not actually eat the food.

Now this this is hearsay, because I wasn’t there, but according to his former colleague, when he remarked on it, Colonel Sanders replied,
“That shit’ll kill you, son.”

And so will clutching unforgiveness.

| “Do you really think this had anything to do with bloggers bitching?”
In short: Absolutely. (Also, “bloggers” doesn’t really mean anything anymore: this had something to do with people writing and talking about it.) …