I got bored quickly with the boxing/gladiatorial references to Parliament’s Question Time yesterday.

Apparently it was David Cunliffe’s first QT as Leader of the Opposition. The coverage I saw was largely a (sad) case of style being reported over substance.

Having earlier in the day defended Patrick Gower’s ‘colour’ and instability, I was intrigued and, yes, disappointed with his ‘reporting’ on the six o’clock news. It seemed like a comedy skit more appropriate for Hamish & Andy or another laddish prank show rather than the network news.

Patrick Gower focussed on Cunliffe’s verbal faux pas (mixing up the words Chorus and caucus) and mocked Labour’s clear use of a talking point (Robertson replaced by Parker as deputy leader by ‘mutual’ agreement).

Bokay. As 3News ‘political editor’, that’s Patrick’s  call — but it seems apparent he is pursuing an agenda to demean the Labour Party and its leader. Which, speaking as someone with no dog in the fight, is interesting to watch from the sidelines. In a slow-motion-car-crash kind of way. (I wonder how it will end?) 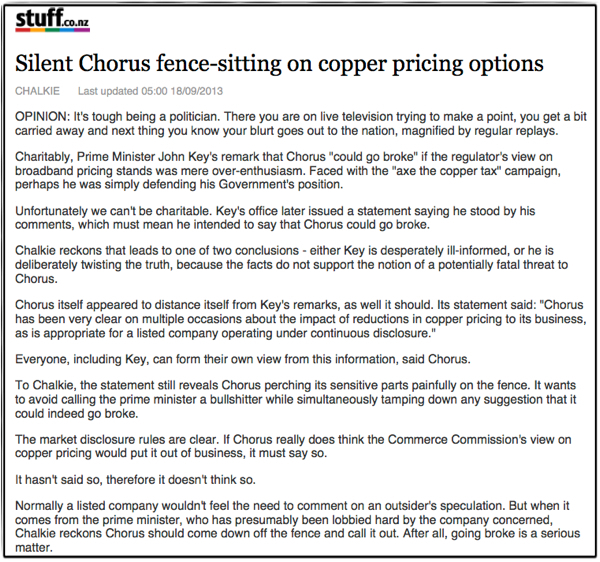 Click to read the story at stuff.co.nz — including the observation (spoiler alert): “Chalkie must conclude that Key is talking codswallop, presumably for political reasons.”

There’s a ‘bubble’ effect, where a politician gets accustomed to deference from his underlings (if not obsequiousness). It can make them lazy, intolerant of dissent or correction, and casual with the truth. We’ve seen that.

But now and then, the bubble gets wedged up against reality. Throwaway remarks (or ‘codswallop’ as Hunter says) can awkwardly come back to bite.

When discussing the business affairs of companies listed on the stock market, or soon to be, someone is always listening — and analysing.