« Lorde has her own ‘Piece of Me’ moment — here in New Zealand :(
Judith Collins’ ‘really ugly’ attacks echo Muldoon’s tactics »

Hate blog gets [comprehensively] jammed. Beats a letter to the editor, I guess.

Trust Cameron Slater to go too far with his brainless hate speech. 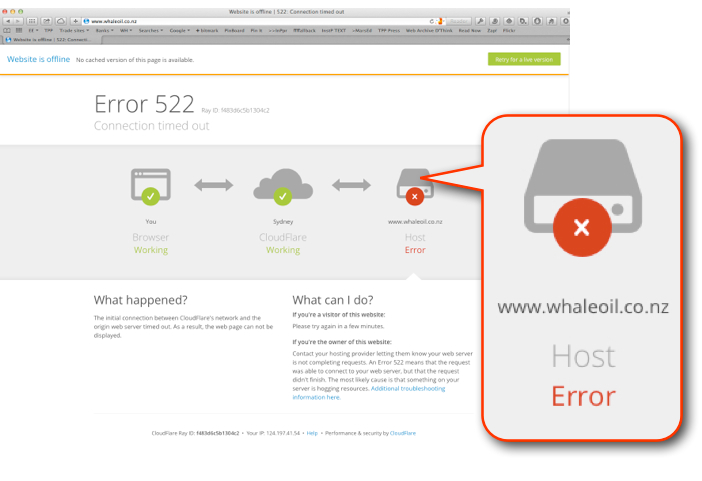 Chickens coming home to roost? Naturally the spiteful hate merchant objects to his treatment at the hands [allegedly] of some of his victims and critics. Apparently it’s a Denial of Service attack. Quite a protracted one.

As is recorded elsewhere on the internet (e.g. Whaleoil stranding, day three: After meeting with police, Slater preps new server for site’s return – NBR) apparently Cameron Slater’s odious hate blog has been subject to some interference.

It seems, despite Cameron Slater’s connections to high places (pfft!) and his access to no doubt top-flight technical expertise, his ‘partisan cyberspace sphincter‘ has been jammed closed for three days and counting. A moment’s silence. 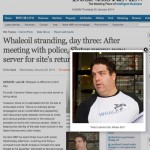 The question, so nicely asked but unanswered by the NBR (or anyone so far) is: ‘Who’s behind the whale fail?’

Assuming it’s not a publicity stunt perpetrated by Slater and his attention-seeking cabal of haters and sock-puppets, it seems the ‘Denial of Service’ attack on his website has been quite competently carried out — and has (if we are to believe Cameron Slater’s account) been adapted to frustrate technical efforts to defeat the sabotage.

Is this a bad thing?

On one hand, I’ve had websites hacked before so I feel his pain. It’s a violation. I’ve also copped it when I’ve displeased and angered ‘internet marketing experts’ whose spruikery, scam-like claims and behaviour I have exposed and criticised here at The Paepae and elsewhere. In response (or perhaps just by coincidence? :)) at that time a number of fake blogs were set up impugning my reputation, using my name linked to words like ‘scam’ and ‘fraud’. As I commented then, one should expect a few bitemarks when dealing with such types. Actions have consequences.

But on the other hand, I also see it as That notorious bully-boy Cameron Slater is coping some negative reaction. (To WHAT, exactly? We don’t know.)

Could it be the appalling, ignorant, hateful comments he published recently describing a West Coast road crash fatality as a ‘Feral dies in Greymouth, did world a favour’? (see Blogger puts the boot in – Greymouth Star)

Maybe. Maybe not. The apparently effective DOS attack on the hate blog seems to have been very quickly arranged if that dispute were the trigger. It’s possible, I guess.

As I see it, in their desperate search for more and more ‘clicks’ Cameron Slater and his little band of sycophants have spewed their vitriol, bigotry and hate-speech (thinned out with ‘trivia of the day’ and viral videos) so far and wide, the universe of potentially offended parties is large.

Cameron Slater’s (typically) simplistic, pugnacious and, some have said, sociopathic, empathy-free reaction to being called to task for adding to a grieving family’s grief in such a manner has been binary:
Because as a result of his comments he’s been on the receiving end of hate speech, including, he says, ‘death threats’ and ghastly Facebook comment(s) made regarding his daughter, ANYONE who condemns Cameron’s obscene comments — about a so-called ‘feral’ who dies in a road crash as ‘[doing] the world a favour’ and his unrepentant follow-up vitriol — is (according to Cameron) condoning threats of gang rape.

Or have I misread him? What do you think? 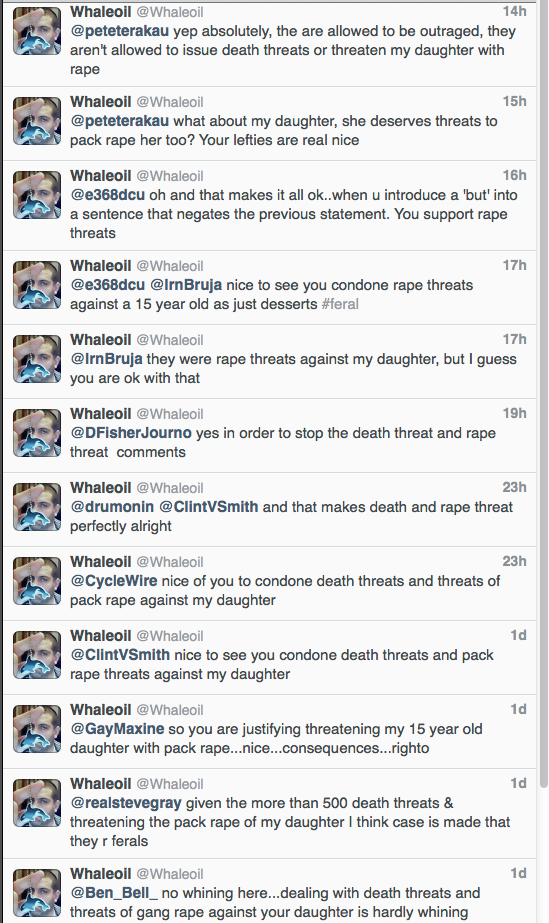 Sorry Cameron, if you’re reading this, that seems like a stupid argument. And a smokescreen.

Cameron Slater appears to be indulging in his usual vacuous MO: attempting to smear his targets — in this case, all of ‘them’ as ‘ferals’. Typically, it seems to me he’s thus trying to dodge his own responsibility for the negative reaction his actions have created. (Obviously I don’t ‘condone’ rape threats. Or hacking websites.)

Just an observation: When it comes to hate speech, it seems to me Cameron Slater and his goons love dishing it out, especially to ‘lefties’ and ‘pinkos’ and ‘greenies’. They lurve the attention. (Ooh, we are sooo #badass.) But as Cameron Slater has demonstrated before: He can dish it out, but he can’t take it.

I have nothing but sympathy for the Slater family in these circumstances and certainly harbour no ill-will towards them. Receiving threats of any sort is an unsettling experience, I know, because one can’t easily assess the mental stability or otherwise of the person making the threats.

It seems to me the bile and shit being flung at Cameron Slater — in the fantasy/social media world that he and his keyboard warriors/acolytes inhabit — are consequences of his actions. I doubt it will ever reach over into ‘real life’, and genuinely hope it doesn’t.