« Your tax dollars at work
Is anything on the web ‘public domain’ — as this editor asserts? »

Politics is a full contact sport — but there are limits

“This is a contact sport, politics. You can’t complain about being attacked.”
— Bill Clinton.

He was probably quoting former US Senator Alan Simpson, who famously used the phrase ‘Politics is a contact sport’ in his 2002 Peltason lecture, and ever since, invoking it to describe his good mate Teddy Kennedy…

Politics is a contact sport. You’re going to get beat up, but never let them distort who you are.

Kennedy knew politics was a contact sport. He could handle things with good humor and a big smile and a huge laugh that was like the back room of an Irish pub.

But there are some things that are over the line, in my view, and the vitriol of some opponents would stretch even a saint’s good humour. One example is the HATEFUL portrayal of President Barack Obama promulgated in a series of ‘pro-life’ ads advocating Colorado’s Proposition 62 the ‘personhood’ bill seeking to outlaw abortion.

A ghastly, shameful ad literally calls Obama ‘The Angel of Death’ and morphs his face onto a skeletal hooded angel image, then later morphs him into the ‘Joker’ in a dark portrayal a la Heath Ledger playing a murderous sociopath in The Dark Knight movie. Disgusting.

Although I have genuine sympathy for their cause, and respect their sincerity — and their faith — I find myself glad their proposition failed. Ad hominem tactics like that deserve no reward. The activists squander their moral authority and undermine their humanity with this evil garbage, in my view, despite their sincerity. What a trap.

On the same theme, George W Bush revealed this week that the ‘worst moment of his presidency’ was when Kanye West condemned him as a racist in the aftermath of Hurricane Katrina and the botched response to the catastrophe of New Orleans. (West actually said “George Bush doesn’t care about black people” at a Red Cross telethon fundraiser for victims of Katrina.)

“I resent it, it’s not true, and it was one of the most disgusting moments in my Presidency” … “the suggestion that I was racist because of the response to Katrina represented an all time low”

… which made me reflect on my comments about some of my fellow Howick residents and their campaign determinedly opposing a very small effort to teach Maori culture in Howick’s Garden of Memories.

I wonder if they take my description and interpretation of their actions and my criticisms as hard? (e.g. “Bigotry has to be opposed, whatever it is dressed up as.”)
Probably not. But I had a twinge of empathy. 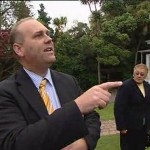 Then tonight I went to the first meeting of the newly elected Howick Local Board and the politician who featured so prominently (shouting ‘I’m not racist!’ into people’s faces) during the ‘full-blown race war’ confrontation filmed by Marae Investigates, Michael Williams, was elected chairman. 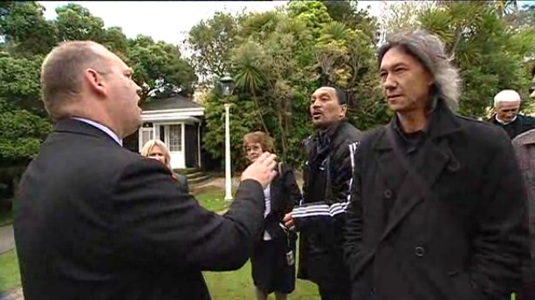 New Howick Local Board chairman Michael Williams (left) telling local Maori and supporters that he OPPOSES the rebuilding of the burnt-out whare in Howick's Garden of Memories ... turning up to say that (and declare Howick's 'independence' from Manukau City Council over the issue) to the cameras on the morning of the blessing and sod-turning ceremony which started the rebuilding project 13 Oct 2010. (image: TVNZ)

Michael Williams said in his inaugural speech tonight that there was a time in 1823 when his family arrived — Missionaries? It seems likely — and was ‘welcomed and protected by Maori.’ Nice to hear that.

Unfortunately (from my point of view) he extrapolated that to a thought: NOT that he and his family therefore should be grateful to the Maori tangata whenua (people of the land) and that he owed a duty to do whatever he could do to repay them, to protect them and their culture — but rather, that it was now “our responsibility in turn to welcome the migrants of many races and cultures to this land and this community. So I would say Ni hao and Namaste!”

Oh. That’s a missed opportunity. Spoken like a colonialist. (But I’m NOT saying he’s Hitler!)

God protect us from imperious arrogance. Surely we need to respect the cultural traditions already in place in this land, to give them room to flourish, instead of oppressing them with insidious move after move to, say, block the reinstatement of the little whare in the Garden of Memories. Like it or not, admit it or not, white colonial culture has imposed its traditions on the indigenous all over the world. In many cases it’s been disastrous for the local culture.

Let’s ask: What is the best way to go forward, together, given the mistakes that have been made in the past? Not more cultural dominance, surely? … Even if it’s under a banner of democratic ‘multiculturalism’ (which I fully support, by the way.)

It’s just that there’s nowhere else for Maori to go to be Maori but Aotearoa, which is why we have provisions like this on our statues:

Local Government Act section 14
“… a local authority should provide opportunities for Maori to contribute to its decision-making process”.

I’m looking forward to seeing how the Howick Local Board embraces that.