« Chris Trotter on the Urewera Four. Wow!
A polite request from Plunderbund: ‘Please unblock our ads’ » 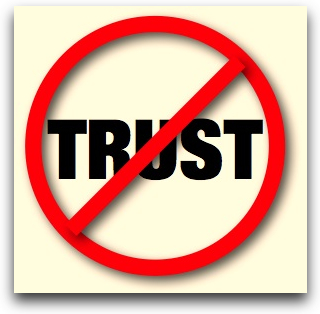 Cameron Slater seems aggrieved that some in ‘the media’ don’t actually trust him. Surprise!

We’ve discussed before Dan Gilmor’s concept of ‘Negative Credibility‘ — the idea that sometimes information can have an appearance of LESS VERACITY because of its source.

Gilmor pointed to Andrew Breitbart’s exposé of the Weiner/underpants/twitter ‘scandal’ (triggered by Rep. Weiner accidentally tweeting a photo as a public reply when he meant to send a DM, we suspect) … saying because the story was coming from Breitbart (a notorious partisan political propagandist and internet storm trooper) he was inclined to believe it less. Even though it was true, as it turns out.

Following hard on the heels of Chris Trotter’s recent assessment that as a result of publicising personnel files unethically leaked by the Ports of Auckland company, NZ blogger (and Breitbart wannabe?) Cameron Slater “… faces the “complete loss” of any “journalistic credibility [he was] beginning to establish in the mainstream media”, I observed this:

I have spoken to Sundays’ John Hudson and his producer, I offered to share the relevant & pertinent information which would allow a TRUE story to be told. Thus far Sunday & John Hudson have barely acknowledged me and chosen to ignore the information I have.

Well, I’m sure they have their reasons. At a guess, I’d say it has something to do with Chris Trotter’s analysis: Cameron’s loss of credibility.

Cameron acting as a volunteer (cough) spin doctor for the Port company, and — as he did for Simon Lusk‘s murky anti-MMP campaign (sniff) — making his partisan blog a conduit for what the NZ Herald called ‘ethical and legal breaches‘ has consequences. One of those, I suspect is a natural inclination to ask the question: Whose bitch er, ‘public relations strategist’ is Cameron Slater being now, in his latest hate war?

David Farrar — Facts may be smaller than they appear

On the other hand, in blogger David Farrar’s case, there’s no question about whose bi… um, who he’s working for: The National Party.

In the strange twilight that is political spin, David Farrar — whose openly stated and well-known past employment in various National Party leaders’ offices and whose current professional and business contacts clearly qualify him to share authorised National Party talking points and ‘inside’ information — seems to fancy himself (ha) as a Labour Party insider. (splutter)

Recently he reported some departures from the Labour leader’s office viz:

Last night I saw through via Twitter that David Farrar has blogged another asserted ‘fact’ purporting to be inside information from the Labour leader’s office: This time a claim (again expressed as ‘fact’) that David Shearer’s office has ‘gagged’ David Cunliffe and ‘banned him’ from being interviewed on TV. 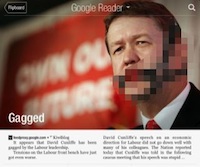 Farrar’s blog post was quickly and breathlessly ‘repeated’ by tag-team wrestler and moral conservative Cameron Slater whose ‘value-add’ was nothing but a photoshopped image of Cunnliffe wearing an S&M bondage gag. Cameron’s behaviour is very ugly at times. (Yet he continues to call Labour ‘the nasty party’. Yeah, I know.)

But, honestly, after David Farrar’s ‘truth-FAIL’ bomb about Fran Mold and John Pagani supposedly having ‘finished’ a week or so ago, and his damp squib climb-down to “A commenter on my blog told me” I’m skeptical. Such rumour-mucking is redolent of Cameron’s dishonest tactic ‘I’ve been told things. I’ll repeat them as if they were true’ and proud practise of ‘non-journalism’. I’d expected better of David Farrar.

Speaking as an observer, not a player, it seems to me the National Party’s ‘unofficial’ mouthpieces are attempting to revert to their tactic of spreading lies/rumours aimed at de-stablising the Opposition’s leadership.

Look how well that didn’t work last year. Trumpeting about ‘unstable government’ the Key/Joyce campaign machine parlayed a near-impossible-to-lose second term election into a one seat majority ‘coalition’ … so reliant on a mad uncle with amnesia they can’t put him out to pasture, despite his chaotic ramblings and clearly dubious behaviour (asking for ‘anonymous’ donations to be split? Why?)

These acolytes of the Key administration (which has, let’s face it, been on the back foot since the 11 November ‘Cup of Tea‘) seem to be grasping for any distraction from the ‘quartus horriblus‘ … or to quote Paul Thomas‘ telling phrase:

Prime Minister John Key, who’s on a bit of an anti-roll right now, could have responded in any number of ways [to Conservative Party leader Colin Craig’s claim that our young women are “the most promiscuous in the world”] but opted for the first thing that entered his head, which was that Craig had made it up.

Perhaps he’s not the only one making things up?

Other observers, however, ‘clearly‘ at times follow and swallow the propagandists’ trail of bread crumbs hook line and sinker (yes, horribly mixed metaphor — so sue me).

When these guys (Slater and Farrar) say something, now I think: Hmm. Maybe. But it’s coming from THEM. So … maybe not. Probably not.

Spin doctors, paid or voluntary, are not trustworthy.