No Big Deal, but it was interesting to see how Patrick Gower described his own actions: 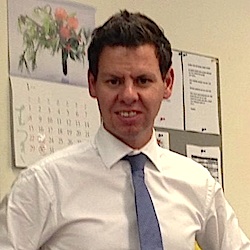 Paddy Gower: “I was being mischievous.” ORLY?

The TV3 political journo seems to excite tremendous personal criticism every now and then — from various sides — for his attempts to ‘beat up’ or (as his critics allege) to create a story. (Quelle horreur!)

Left-wingers who whinge about him (see what I did there?) should, I think, recall how he has at times been a thorn in the side of the right.

Who can forget the ‘deceitful bastard‘ label Don Brash plastered on him? (With good cause? Dr Brash would say so.) But that was hardly a badge of shame for a journalist, it seems to me. Almost the opposite, in fact. Journalists — along with politicians — remain stubbornly at the bottom of lists of professions (cough) people trust.

Patrick Gower, along with his equally dodgem-like amigo Duncan Garner, has been part of the political education of many a naive and aspiring member of parliament. It was Michael Hastings (RIP) the journalist who exposed General Stanley McChrystal’s gung-ho attitude to pesky things like the chain of command who said, famously, in the aftermath of his Rolling Stone article:

Having a journalist around is like having a pet bear. Most of the time it’s really cool, but once in a while it’ll bite your hand off. 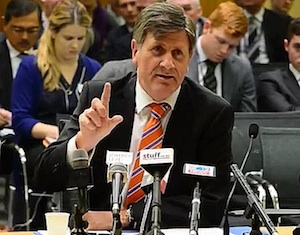 Political operator: The NZ Prime Minister’s chief of staff Wayne Eagleson defending himself and his staff from allegations they improperly influenced the Parliamentary Service and invaded a journalist’s privacy.

It may not be popular for me to say this, but I think a little bit of instability and unpredictability can be A Very Good Thing in political journalism. It can be good to keep the over-resourced, taxpayer-funded spin doctors, media manipulataors, political operators, advisors and ‘activists’ (paid or unpaid) — especially those of the government of the day — off-balance now and then.

Yes, Patrick is a loose cannon. Sure. (Remember this entertaining spiel? Wonderful!) In my view, he’s driven by ambitions and appetites of the sort that have always been part of the journalistic psyche. If he was, as some seem to wish, subdued into docile stenography, I think our political landscape would be the poorer for it. God knows we need ‘characters’ like him. Warts and all. That said, Patrick operates on a knife’s edge. He’s on a high-wire. Especially approaching an election where the stakes are high. Never forget it. Dicking around such as recorded in the trivial twitter banter above (“I was being mischievous”) to my mind, erodes a viewer’s confidence. Am I wrong?

TV3 has always, it seems to me, blurred the line (oh, noes) between political reporting and political commentary. That’s been true since the chameleon-esque Bill Ralston’s days. I can live with that. I actually like it at times — especially when I agree. (Sooo shallow!)

But accuracy — a news outlet’s reputation for reporting facts with veracity — this can be a fragile thing, like an orchid. Accuracy can’t bear the weight of laddish reportage of rumour, speculation and innuendo, nor of a reporter being used (like a puppet, or a guided missile) to credulously spin ‘lines’. e.g. Russian hackers targeting Murray McCully’s email. It certainly can’t easily bear much confession of the “I was being mischievous” ilk, either.

The bare-faced cynicism of a government’s spin doctors has to be experienced to be truly understood. They take the game very seriously, and some of them are bloody good at it. Friday afternoon document dumps, endless OIA shenanigans, ‘policy announcements’ made for the sake of distraction from bad news — or, sometimes, merely in an effort to gazump a rival’s ‘initiatives’, to spike their guns, or starve political opponents of attention — these are the light end of the spectrum. (They don’t call it ‘dark arts’ for nothing.)

You might also be surprised how much energy is invested into media manipulation, use of proxies, cultivating patsies and lap-bloggers, gatekeeping and ‘access’ as a carrot-and-stick — all with the aim of achieving media buy-in, an easy run for their ‘lines’, or creating a kind of rapport encouraging a default view leading to sympathetic, on-message portrayal. (e.g. “The minister/the government is busy running the country.”)

So, for that reason, while stopping some way short of bestowing Living Treasure status on the at-times chaotic Patrick Gower, I actually think we’re better off with his irrational exuberance and his flights of fancy than without them. Feel free to disagree.

Too much Mogadon, or constant expressions of worthy, dignified sobriety can undercut the ‘game’ … and see the media outplayed. We need some mongrel, for heaven’s sake. I’d rather have an overexcited, barking Fox-terrier-Jack-Russell-cross with sharp teeth than a doped-up, in-bred Corgi with a congenital back condition and a weak heart.

Yes, bovver-boy Patrick has been played at times, in my view. Like a fiddle. He may not have had the sense to recognise it. As I said, NBD.

But for me, the natural erosion of confidence in ‘Paddy’ is accelerated by his use of hyperbole, a tendency to report rumour, and his displays of an obvious slant (like today):

Parker’s appointment as deputy ahead of Robertson shows Cunliffe and Labour having difficulty uniting.

Gee, the ‘Labour is soo divided’ narrative. (Now, where have I heard that before?)

Yesterday, shredding a few more flakes of credibility, Patrick admitted to ‘being mischievous’. Oh dear. My response?: For a while I’ll ask myself if that’s the case about everything he ‘reports’.

I wish Patrick well in his work and his life, as always.

PS I came across this quote recently from the legendary writer and newspaper editor H. L. Mencken: “Journalism is a fleeting thing, and the man who devotes his life to it writes his history in water.” — Gulp.