« The ethical answer is to side with the victim
4G iPhone – Lost or stolen? »

Dean Letfus: the reputation he deserves? 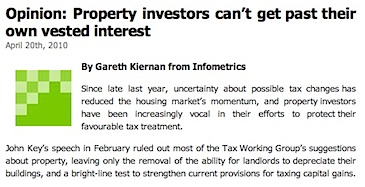 Someone emailed me a link to an article by property economist Gareth Kiernan of Infometrics in which he sets out to debunk (pull the legs off) arguments proffered by some self-proclaimed ‘property experts’ like spruiker Dean Letfus in defence of the tax treatment of property investment.

…So I don’t buy into the whole “social service” argument.

I’ve also been exasperated by arguments put forward by other “experts” such as Dean Letfus saying that “people will literally have nowhere to live” and “the end result is a … chronic housing shortage and massive rental increases.”

In response to these assertions, consider the following argument…

I’ve got a lot of time for Gareth. He’s directly helped me with data for several of my or my authors’ books including Olly Newland’s The Day the Bubble Bursts and aided my meagre understanding of the power of trends in property markets.

I talk with Gareth every few months and always enjoy hearing his views. He brings a rigorous, careful analysis of the figures and (as economists do) explains things in terms of hindsight — what’s been happening. That’s not a criticism. I like him and respect him.

So his (fairly light, I thought) pre-Budget opinion piece at interest.co.nz is worth reading, whether you agree with everything he says or not. What also interested me (and the person alerting me to it) was some of the reader comments responding to the article which reveal a level of (dis)respect for Dean Letfus.

He’s clearly made an impression on some other folks… someone even quoted posts from this blog! Meanwhile, Gareth himself is obviously not too impressed with Dean Letfus either … although I don’t recall ever discussing the subject with him.

He also described Olly Newland’s advice as ‘drivel’ before later grudgingly admitting that gee, maybe experienced ‘old school’ type investors like Olly had actually learned some worthwhile things through ‘the crucible of experience’ that Mr Instant Expert hadn’t realized. So it seems fair enough to me that the slick and self-aggrandising “expert” should cop a wee bit of criticism himself. 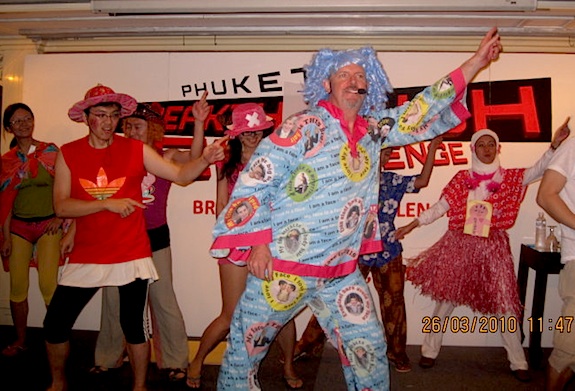 Here’s a sampling of the comments, courtesy of interest.co.nz (including Andrew King’s view – “The first thing [Gareth] got completely wrong was believing Dean Letfus was an expert in property.” Zing!):

I wish the securities commission would have the powers to shut down spruikers and slick salespeople like Dean Letfus. I think he’s an absolute clown: http://www.thepaepae.com/no-april-fool-dean-letfus-claims-defamation/3319/

The sooner Dean Letfus is shut down the better our country will be.

You don’t need to worry about Dean Letfus. He is widely perceived to be somewhat of a joke in property investment circles. Whilst he is a passionate speaker and uses God and the poor children of Fiji to pull the heartstrings as part of his slick sales pitch, he lacks content and in depth knowledge. His throw caution to the wind attitude has cost two of my friends severely – one bankrupted, the other committed suicide partly as a result of all the borrowings Letfus’ teachings made him incur.

Letfus no doubt has very high property borrowings and he his probably becoming exposed now. As a result he has to sell lots of tickets to his events, and his costly $20K mentoring package (www.millionairemastery.co.nz).

It was interesting to find out Dean’s true story on the PropertyTalk.com forums (http://www.propertytalk.com/forum/showthread.php?t=17353&highlight=dean+letfus). So don’t bother about replying or discussing what such a discredited self-proclaimed ‘property investment guru’ and ‘internet marketing guru’ like Dean Letfus thinks. He only thinks of his own back pocket.

—
Andrew King Says:
April 20th, 2010 at 5:43 pm
I would have expected better from an infometrics employee. The first thing he got completely wrong was believing Dean Letfus was an expert in property. [Comment: Well, to be fair, Gareth didn’t say this. He said he was an “expert”… implying kind of the opposite.]

Gareth said: property investors have been increasingly vocal in their efforts to protect their favourable tax treatment.

Every investment has its own set of advantages and disadvantages. To use tax law to make one investment less favourable than another is poor tax law. Shares are more liquid than rental property, so should there be a tax on share transactions?

Gareth. What is the favouratism in your view?

Why? Depreciation would have been factored into their initial purchase decision and has a large effect on cashflow. Having the benefit of depreciation at the beginning of the investment makes it easier to provide rental property. If the property does not depreciate then the money is paid back and the return for the investor is reduced.

Some landlords seem to see themselves as providing a social service

Statements like this make me think that you don’t have very many good points to make. This is very weak. Gareth, which landlords have said that? A rental property is a business not a charity.

—
Anna Chen Says:
April 20th, 2010 at 6:34 pm
@Andrew King: I LOVE THIS COMMENT –
“I would have expected better from an infometrics employee. The first thing he got completely wrong was believing Dean Letfus was an expert in property.”

The only thing property shark Dean Letfus is good at, is blowing his own trumpet.

There’s a saying that we each have the reputation we deserve. Oops.